Business owner says he spread chemicals in one of Anchorage’s gathering places for homeless people. Now police are investigating. 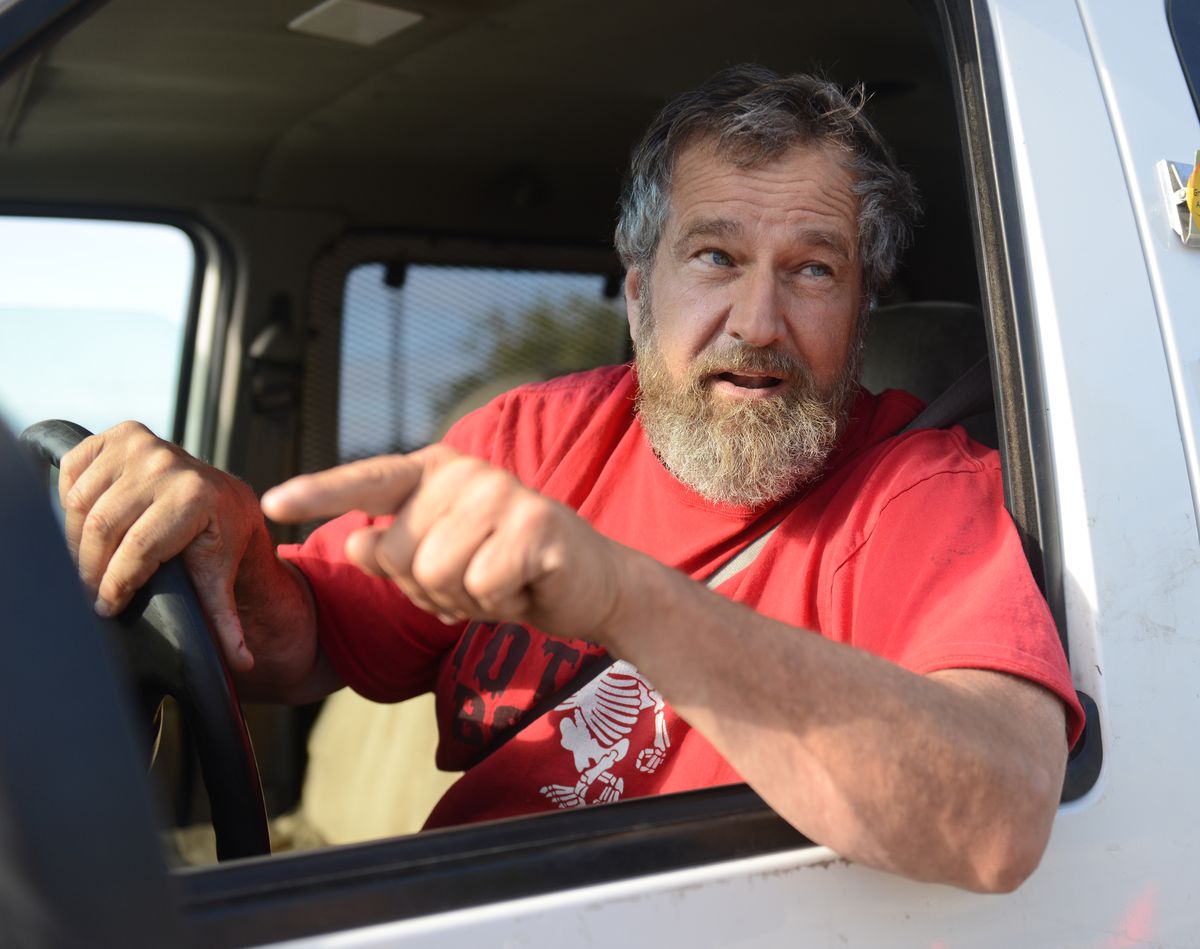 Ron Alleva looks down Karluk Street on Thursday as the fire department responded to the chemicals he claimed to have spread near Bean’s Cafe and Brother Francis Shelter. (Bob Hallinen / ADN)

Ron Alleva looks down Karluk Street on Thursday as the fire department responded to the chemicals he claimed to have spread near Bean’s Cafe and Brother Francis Shelter. (Bob Hallinen / ADN)

Anchorage police said Friday that they've opened an investigation after a longtime critic of city homelessness policy claimed responsibility for spreading potentially hazardous chemicals in one of the city's most popular gathering places for homeless people.

The discovery of the chemical — a type of pool cleaner, calcium hypochlorite — prompted a major response that involved at least three city agencies. Officials said that the incident generated fear and unneeded stress among the already-vulnerable people who frequent the area, as well as for workers at the nearby soup kitchen and homeless shelter that support them.

Alleva said he got permission from a city employee, whom he wouldn't name, to spread the chemicals as a disinfectant, after police swept through the block Wednesday to clear out campers and loiterers.

"All that was was bleach," he said, adding: "You're not handling uranium."

Alleva described his action as a public service meant to "mitigate a terrible, biological hazard" of human feces, vomit and "old food" that had been left behind. And he said the alarm about the chemicals was manufactured — a "publicity stunt" by the local service providers.

"It's E. coli, you're talking bedbugs, lice — I mean, everything was falling there, including street people," Alleva said in a phone interview Friday. "If you ask me straight up, I did a good thing. I have a clear conscience."

A spokeswoman for the city health department, Shannon Kuhn, said her agency had not given Alleva permission to spread the chemicals, and neither had officials at the fire department, the police department or the mayor's office, she added.

A woman said Thursday that her husband had been taken to the hospital after being burned by the chemicals. But that story was inaccurate and the man's health problem was not believed to be directly connected, said Erich Scheunemann, assistant chief of the Anchorage Fire Department.

The department was still concerned enough about the chemicals that a hazardous materials team was called, and a city contractor was ultimately dispatched to clean up the area, Scheunemann said. There was potential for the calcium hypochlorite to cause skin burns or respiratory problems, he added.

The chemical was spread on a dirt strip that runs alongside a single city block, on the east side of Karluk Street between Third and Fourth avenues.

The area is often filled with people standing and even sleeping in tents, many of whom have been turned away from the shelter and soup kitchen because of behavioral or other problems that those service providers can't accommodate.

Scheunemann said the fire department, which also provides emergency medical response for the city, had been called to that block of Karluk around 85 times this year.

Alleva owns a business, Grubstake Auction Co., next door. He's waged a yearslong campaign against the shelter and soup kitchen, saying they coddle homeless people who desecrate the neighborhood.

In September, Alleva and his wife and daughter staged a demonstration, standing across the street from the shelter. They erected a sign falsely claiming that the shelter was closing and sounded train horns, alarm bells and sirens.

Lisa Sauder, who runs the soup kitchen, said she saw Alleva's actions as "continued harassment of people who are in crisis, and of our agency."

She stressed that the soup kitchen exists to feed hungry people, and that it's the city that's responsible for the people on Karluk Street, which is off her organization's premises. Employees of her organization can be as frustrated by the chaos there as anyone else, she said.

"There's a population of people that we can't help, and those are the ones we find here," she said in an interview Friday, standing at one end of Karluk Street. "We strive to keep people away from this environment."

As Sauder answered a reporter's questions, a woman kicked off her shoes, waved her arms over her head and wandered toward traffic on Third Avenue. She was talking to herself.

"This is a perfect example," Sauder said. "What are we supposed to do with someone who is having obvious mental issues?"

Sauder said she was grateful the city had sent police through the area Wednesday to clear out camps. But she also said there's frustration about the lack of services for people who need more than a meal or a place to sleep.

Addressing homelessness and creating new housing are Mayor Ethan Berkowitz's "top priority," and the city is trying to make things better for neighbors of the shelter and soup kitchen, said Nancy Burke, the city's homelessness coordinator. But that process takes time, and it's messy to try to change decades-old policies, she said.

"We're still concerned about the impact," Burke said in a phone interview Friday.

But Burke also said some Anchorage residents assume nothing is being done to address those problems. That's not the case, she said, pointing to both short-term fixes and long-term initiatives.

The federal government awarded a $1.3 million grant in 2016 that's helping Berkowitz's administration develop longer-term housing plans, Burke said. And the city is also in the process of creating a new "campus coordinator" position to divert people with serious problems to other service providers and away from the shelter and soup kitchen, she said.

"I want to be reassuring to the community that there is a lot happening behind the scenes," Burke said. "We're pulling together as quickly as possible and probably don't do as well with communication as we may. But we're working on that."

That woman who was walking toward traffic Friday? Burke said she'd heard about her and that the police department's social services coordinator was responding.

Burke said it was unacceptable that the chemicals were applied by a "private citizen" on a "public roadway." Amid the extensive emergency response Thursday, she said, some of the homeless people in the area thought someone had died.

"It causes concern for people who are already with nowhere to go," Burke said. "They're already vulnerable and it makes people feel more vulnerable, which makes it harder to outreach to them and to establish what's needed to help them move from that location."

Alleva, the business owner who claimed responsibility for spreading the chemicals, said it was the "best thing that happened to that area." A police investigation, he added, is a "waste of resources."

He added: “Get out there and arrest some criminals.”