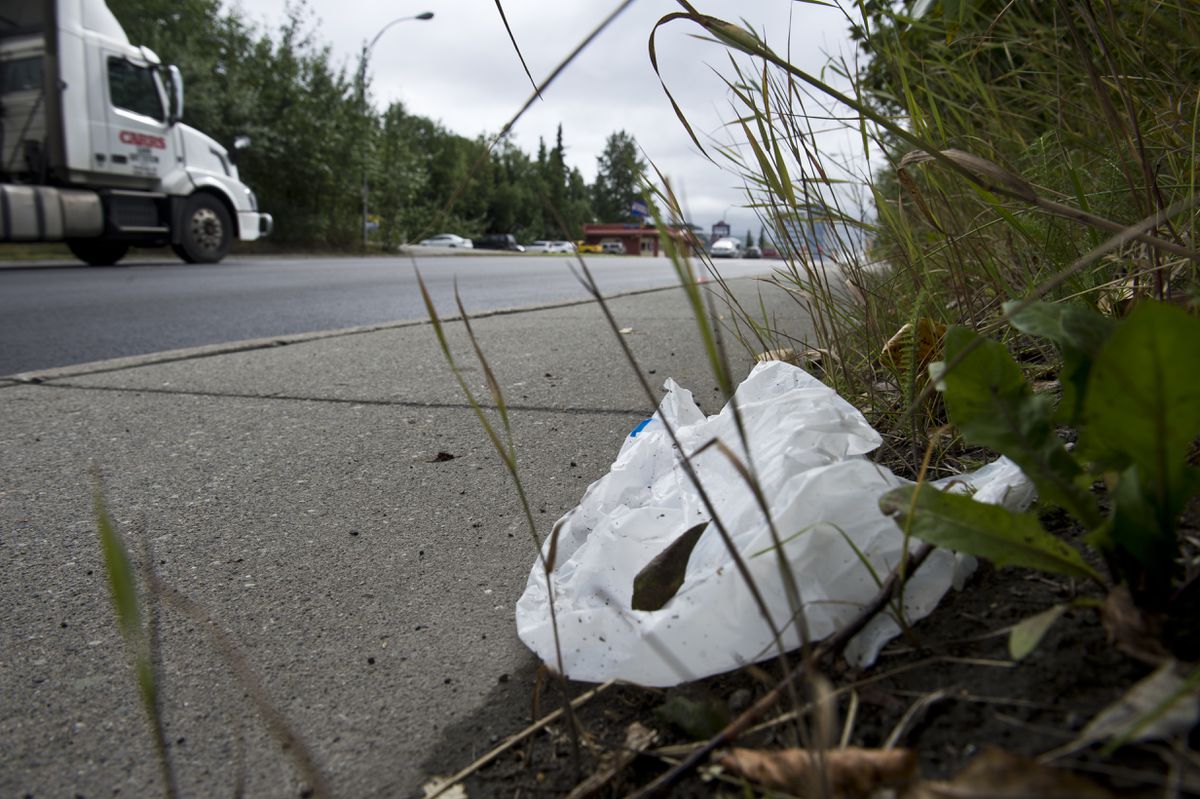 The Anchorage Assembly narrowly voted to entirely ban disposable plastic shopping bags from local retail stores Tuesday night, a more strict version of bans adopted in some other Alaska cities and villages amid concerns from Anchorage elected officials and residents about litter.

The ban, which is expected to have sweeping effects on Anchorage consumers and retailers, takes effect March 1. It affects not just grocery stores but any retail or commercial business in Anchorage, including restaurants, pharmacies and drugstores.

Backers said the measure would reduce litter and encourage consumers to bring their own reusable bags to the store.

In a 6-5 vote on an amendment sponsored by Assemblyman Christopher Constant, the Assembly decided to outlaw plastic shopping bags of any thickness, while requiring retailers to charge a 10-cent fee for handing out paper bags to shoppers. Other communities, including Wasilla, allow retailers to provide thicker plastic bags for a fee.

Weddleton, Croft and LaFrance then joined the majority in supporting the final version of the ban. The vote was 9-2, with only Demboski and Dyson voting against the ban itself.

[Plastic…with a price: How the bag ban in shaking out at Wasilla's big retailers]

Constant spearheaded the push for the stricter ban. At the Tuesday night meeting, Constant held up a woven bag stuffed with more than a dozen thin plastic shopping bags he'd picked up around Anchorage since last week. He said the city needed to simply "ban the bag."

"The waste stream is voluminous and we have an opportunity to break the cycle," Constant said.

Lily Spiroski, the Assembly youth representative present at the meeting, said she conducted an Instagram poll and found overwhelming support among her peers for the stricter ban.

Other Assembly members, including John Weddleton, who owns a comic book store in Spenard, thought the ban on all disposable plastic bags, regardless of thickness, went too far. Weddleton said he agreed thinner bags were a problem because they're more likely to blow around in the wind.

He contended thicker bags weren't actually the problem, calling the final version of the measure "extreme." He also said he's concerned that a rise in the use of paper will have a negative effect on the city's carbon footprint.

Critics of the ban said it would burden businesses and customers while not actually helping the environment.

The American Progressive Bag Alliance, a Washington D.C.-based trade association that represents the plastic and recycling sectors, sent lobbyists to Assembly work sessions to argue against the ban. The association's director, Matt Seaholm, released a statement late Tuesday afternoon where he cited studies in Quebec and Denmark concluding that plastic bags were more environmentally friendly than cotton bags.

The ban approved Tuesday night in Anchorage doesn't apply to the smaller plastic bags found in the bulk foods or candy aisles of the grocery store, or bags for meat, fruit and vegetables. Those will still be found in stores.

The Assembly also decided that retailers will not have to charge fees, which can go up to 50 cents per transaction, for bags made of cloth or woven canvas plastic or other machine-washable materials, called "alternative bags." The fees will only apply to paper bags for now, though that could someday be extended to biodegradable plastic bags, Constant said.

The ban exempts people who are on federal nutrition assistance programs, like food stamps, from paying the fee.

The ordinance says retailers can keep the money from the fees or donate them to a nonprofit. Retailers that fail to charge a fee for alternative bags could face fines.

Constant said he hoped the rest of the state would follow Anchorage's example.

Note: The online version of this story has been edited to clarify that paper bag fees start at 10 cents and can range up to 50 cents for each transactions. The story has also been clarified to better reflect that Eric Croft, John Weddleton and Suzanne LaFrance voted against stricter requirements but in favor of the overall ban.