Plastic … with a price: How the bag ban shakes out at Wasilla’s big retailers 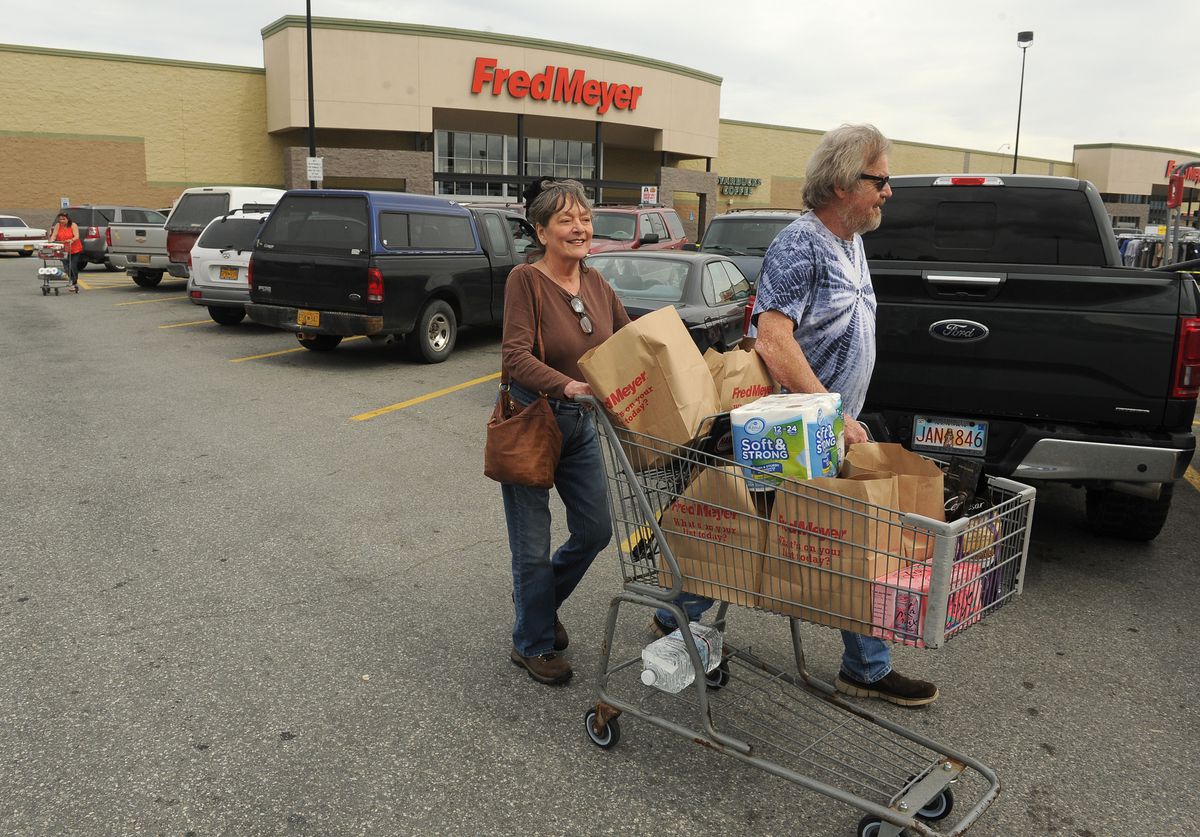 Diana and Paul Pesta wheel their paper bag filled cart to their truck at the Wasilla, AK Fred Meyer on Friday, July 13, 2018. The couple, from Talkeetna, is in favor of the plastic bag ban. (Bob Hallinen / ADN)

Diana and Paul Pesta wheel their paper bag filled cart to their truck at the Wasilla, AK Fred Meyer on Friday, July 13, 2018. The couple, from Talkeetna, is in favor of the plastic bag ban. (Bob Hallinen / ADN)

WASILLA — The debate over a ban on plastic grocery bags, just starting to take shape in Anchorage, is already over in Mat-Su.

Wasilla outlawed the thin, single-use bags as of July 1. Palmer will follow suit in January.

Anchorage hasn't even started on legislation yet. A draft ordinance is expected to be introduced at Tuesday night's Assembly meeting.

"Our little cousins in the Valley, who aren't the most progressive communities, beat us to the punch," said Christopher Constant, one of three Anchorage Assembly members sponsoring a bag ban. "Insofar as that's how this happened, good for them."

Now that Wasilla's ban is underway, people in the state's largest city may be looking north for clues to the future from this Valley shopping hub.

If what's happening in Wasilla is any indication, plastic bags are still around — and paper is back.

At Target and Walmart, purchases still go into a plastic bag if you don't have your own. They're free at Target — for now — and Walmart charges 10 cents each.

The bags are legal under Wasilla's ordinance but more substantial than the thin, single-use bags scattered in trees and along roadsides. Text on the bag describes it as recyclable, washable and reusable up to 125 times.

Not everybody was sold.

"I feel like they are still just going to end up in the garbage," said Christina Moitoso, a Wasilla resident shopping Thursday at Walmart with her father.

Critics of the thickness standard adopted in Wasilla and many other communities around the country say it results in a technically reusable bag that few people actually reuse.

A sign of the debate is the fact that Wasilla and Palmer came up with different bag thickness standards.

Wasilla's ban forbids single-use plastic disposable shopping bags less than 2.25 mils (thousandths of an inch) thick, or about twice the thickness of a human hair.

That's the standard used by most U.S. communities where bans are in place, Wasilla Mayor Bert Cottle said.

"Our research showed that was an acceptable thickness for reusable bags," Cottle said.

Palmer chose 4 mils because that was the recommendation of the plastic bag committee of the Zero Waste Coalition, said city manager Nathan Wallace.

The ban still allows for plastic bags, but thicker than the kind offered in Wasilla.

Committee member Patti Fisher said the thicker bag was a good start to reducing plastic and "sets the standard higher. They'll handle so much merchandise, so much weight. They're washable. So they are a better bag."

Anchorage's draft ordinance proposes a 4 mil thickness, though an alternate offered by Assemblyman Dick Traini proposes 2.25 mils "to be consistent with the national standard for bag durability that generally differentiates between a single-use and multiple-use bag."

The alternate also would require retailers to charge a 10-cent fee if they hand out recycled paper or reusable cloth or plastic bags.

The ban would take effect in January, to give retailers time to use up their single-use bags and plan for alternatives.

Traini, in a memo, described the fee-based ordinance as aimed at changing consumer behavior: "More customers bring their own reusable bags to avoid the fee."

As of March, at least 311 local bag ordinances have been adopted in 24 states in the U.S. and Washington, D.C., according to Plasticbaglaws.org.

Not all retailers in Wasilla provide plastic.

Fred Meyer hands out only paper bags in three sizes, according to corporate spokesman Zach Stratton.

The cost increase to the company is "a small amount," Stratton said.

"We're going to honor what the community is asking for," he said. "As long as it doesn't come at the expense of higher grocery prices, we're fine with that."

Brenda Anderson said she tries to bring her own bags when she goes shopping but was surprised to see the familiar brown paper sacks at Fred Meyer when she was shopping there Thursday.

"I hadn't seen paper bags in a long time," Anderson said. "I prefer paper because you can fit more in them."

Lisa Hacker hefted paper bags full of purchases into the back of her SUV as a young granddaughter cried in a car seat.

Hacker said she hates seeing plastic bags in Wasilla Lake, where she lives. She plucks them out of the water.

But it's pretty awkward trying to carry an unhappy child and a brown sack without handles.

"I like the plastic better because you can grab them and hold them when you have kids," she said.

A customer at All Seasons Clothing Co. shared his overall displeasure at any form of a ban in an email after the outdoor apparel store sent customers a notice they'd be offering paper bags at 10 cents each.

"I will no longer shop in Wasilla or Palmer because of the plastic bag issue. I have recycled every plastic bag I have received," the customer said, in an email provided by the store.

He said he plans to shop at Three Bears, a grocer with most of its locations outside Mat-Su cities — or in Anchorage.