How health care, taxis and training helped cut the number of emergency calls around the Anchorage homeless shelter 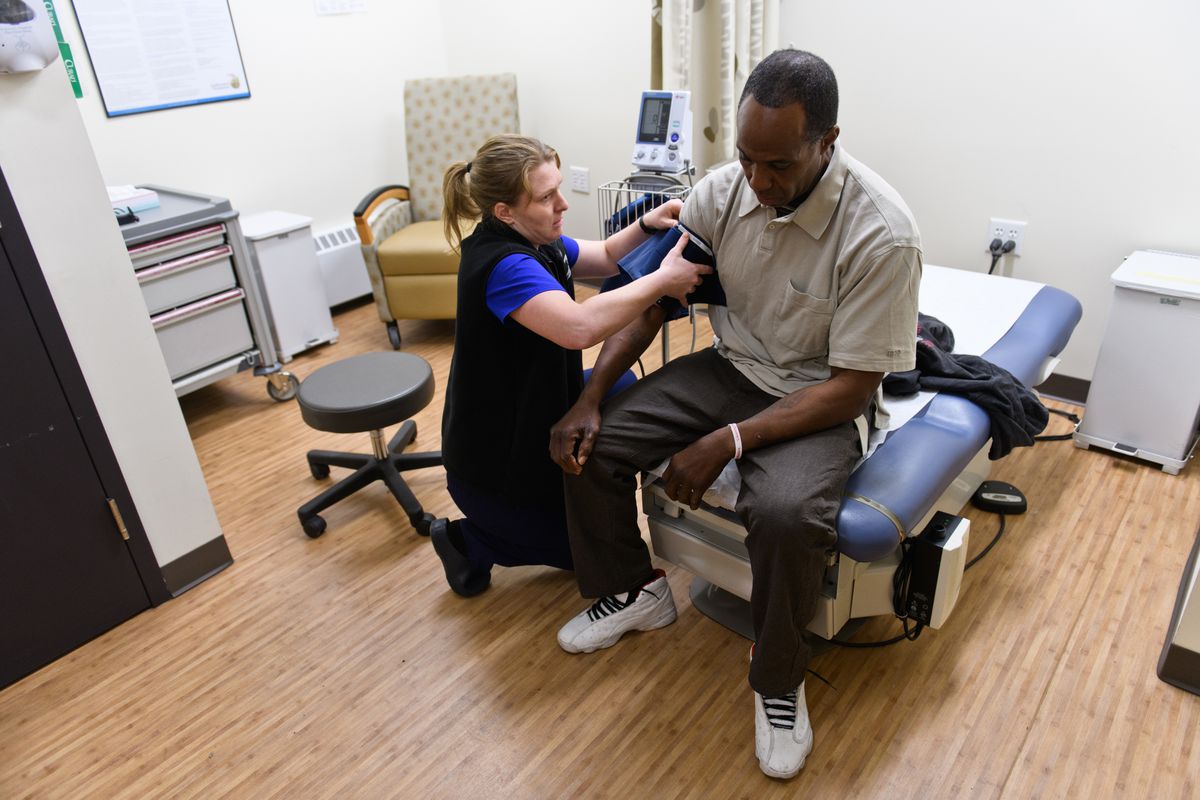 The number of emergency responses to Anchorage's largest homeless shelter and soup kitchen was already trending upward in 2016 when the leaders of the city's largest hospitals started to talk.

Instead of bringing so many homeless people to emergency rooms, the executives asked each other in private meetings, could urgent care come to them? Could the hospitals work together to do it?

That unusual partnership is now playing a role in what officials describe as a significant reduction to record levels of 911 responses around the 300 block of East Third Avenue. Providers say disadvantaged clients have better access to health care. Officials have calculated an eye-opening estimate: Hospitals and taxpayers have saved more than $1 million overall this year from a corresponding drop in hospitalizations.

Just past the front doors of Brother Francis Shelter, a newly renovated medical clinic opened in April 2017. The clinic is staffed full-time with a physician assistant and a nurse from Southcentral Foundation. Around the same time, the shelter opened 10 "medical respite" beds where people who are homeless can spend months at a time recovering from surgery and medical problems.

Catholic Social Services, the faith-based nonprofit that operates the shelter, has dramatically increased its spending on transportation to the hospital or appointments, data show. Since June 2017, the nonprofit agency has spent an average of $2,339 each month on taxi vouchers for clinic users, according to data provided by the agency.

The changes have happened alongside a ground-level education effort to educate on the proper use of 911 calls, both for emergency medical services and police. A city-funded team that mainly consists of two social workers, a firefighter and members of the Anchorage Police Department Community Action Policing Team have been training staff at Brother Francis Shelter and Bean's Cafe, the nearby soup kitchen, on how and when to make 911 calls. The team is also teaching techniques for defusing tense situations and building relationships, in hopes of making the area safer, said Nancy Burke, the city homeless coordinator.

In the middle of summer 2017, emergency medical responders were dispatched to the Brother Francis Shelter or Bean's Cafe roughly 250 times in a month, according to data provided by the Anchorage Fire Department. Police were called more than 230 times, including canceled calls, according to police data. Some city Assembly members went so far as to propose an ordinance that would fine the shelters for the excessive calls.

Assistant fire chief Alex Boyd said it's difficult to pinpoint the reason for the drop in emergency medical responses. Calls are down citywide, he said. This week, the city said the overall homeless population had dropped by 300 people, according to its most recent summer count.

"There could be about 27 different reasons that have led to those responses in that grid dropping," Boyd said.

For years, the Brother Francis Shelter operated a tiny health clinic near the shelter's front entrance. It was staffed by volunteers and often open once a week, usually in the evenings. High turnover among the staff meant clients weren't consistently seeing the same provider, said David Rittenberg, the shelter director.

People staying at the shelter also had to figure out how to get to their own medical appointments. Some just didn't go to the appointments. Others resorted to calling 911 for problems that weren't emergencies — or simply for transportation.

The money and staff to run the clinic day-to-day came from Southcentral Foundation, a nonprofit health care organization created in the early 1980s by Cook Inlet Region Inc. The expansion of Medicaid coverage in Alaska made it possible, said Denise Coslett, the clinical director.

On a recent Monday afternoon, Mindy Dietz, a nurse, checked in a male client and took his temperature and blood pressure. Renee Bond, a physician assistant, recorded the information on a computer.

She said it took months to build trust with her clients. Some hadn't seen a provider in years, while others may have had bad experiences in the past.

"We do have a lot of people who are addicts, who are afraid of being discriminated against or judged if they go into (the) emergency room or primary care," Bond said. "Here, we really try to let them know ahead of time, there's no judgment here. We just want to help you the best we can.'"

Most days, the clinic treats wounds, coughs and colds, Bond said. She's seen some severe lacerations, broken bones and life-threatening drops in blood glucose levels. Once, a woman tried to deliver a baby.

In winter, the clinic sees between 10 and 14 people a day, Bond said. The pace slows down in the summer, though some people come in from outside camps, Bond said. Most don't have insurance and can't get care anywhere else, she said. The clinic prevents treatable ailments from escalating into life-threatening situations that require hospitalization, she said.

But Bond said the experience has given her a close look at the scope of mental health problems that go unaddressed in the area around the shelter.

"It's our biggest problem here," she said.

Buoyed by the positive response to the first year of the clinic, Southcentral Foundation is now exploring the possibility of bringing mental and behavioral health counseling there, said Larissa Tapia, an administrator with Southcentral Foundation. That could mean that clients at Brother Francis Shelter no longer have to travel to mental health appointments elsewhere in town, she said.

If a person who is homeless does end up hospitalized, the question is what happens after they're discharged.

It was a question that began preoccupying the city's major hospitals several years ago.

About six years ago, Dick Mandsager, then the head of Providence Alaska Medical Center, heard about a hospital in Spokane, Washington, that was providing "medical respite" beds for people who were homeless. It got him thinking a lot about the intersection of homelessness and health care, he said.

At the time, the beds in Anchorage emergency rooms were constantly filled with people who didn't need hospital-level care, but had nowhere else to go.

"From a hospital's perspective, the unnecessary cost, when people are stuck in hospitals, is a lot," said Mandsager, who is now working as a senior fellow with the Rasmuson Foundation on issues related to homelessness.

Now, a quiet hallway at Brother Francis Shelter provides 10 beds for people recovering from surgery and medical problems. Again, no public money has been involved — Providence, Alaska Regional and Alaska Native Tribal Health Consortium split the $287,000 annual budget, and a dozen additional businesses and community groups pitched in for design, labor and materials. As with the new clinic, the state's expansion of Medicaid coverage in 2015 opened up critical funding, Mandsager said.

For a few months this year, one of those beds was occupied by Nichole Sandahl.

Sandahl, 36, grew up in northwest Montana and most recently moved from Nome to Anchorage, expecting to find work as a massage therapist. But the job fell through, and she didn't have a place to live. She spent one night at the Brother Francis Shelter and found it unsettling and chaotic. She then moved to the Downtown Hope Center, a women's-only shelter a few blocks west, where she started employment training and kept looking for work.

But Sandahl also started to have medical problems that led to repeated hospitalizations. At one point, her lungs filled up with fluid. An emergency surgery landed her in the hospital for several weeks. She was discharged without a place to live.

By then, a hospital had flagged Sandahl and her support dog Kratos — a black Lab named for the Greek god of strength — as candidates for the new respite program at Brother Francis Shelter. In March, Sandahl moved in and spent the next few months sleeping and recuperating. She hasn't been hospitalized since.

Sandahl now lives in her own apartment in a fourplex in Government Hill. She's waiting to be approved for Social Security. In the meantime, Catholic Social Services is helping her with rent.

Of the 69 people who used the respite beds from March to July, 35 used the shelter's "rapid re-housing program," including Sandahl. All but two of those people are still housed, said Teasley, the spokeswoman for Catholic Social Services.

Mandsager said he'd like to see Anchorage adopt a system similar to one in place in Boston, where shelters are able to admit people to respite beds 24 hours a day, seven days a week, with expenses paid through Medicaid. He said there are efforts to explore alternative buildings in Anchorage that could host such an operation.

"This is a long, roundabout way of saying the health care delivery system and homelessness are inextricably linked," Mandsager said. "If we can get people into housing, ER costs and hospitalizations start changing."