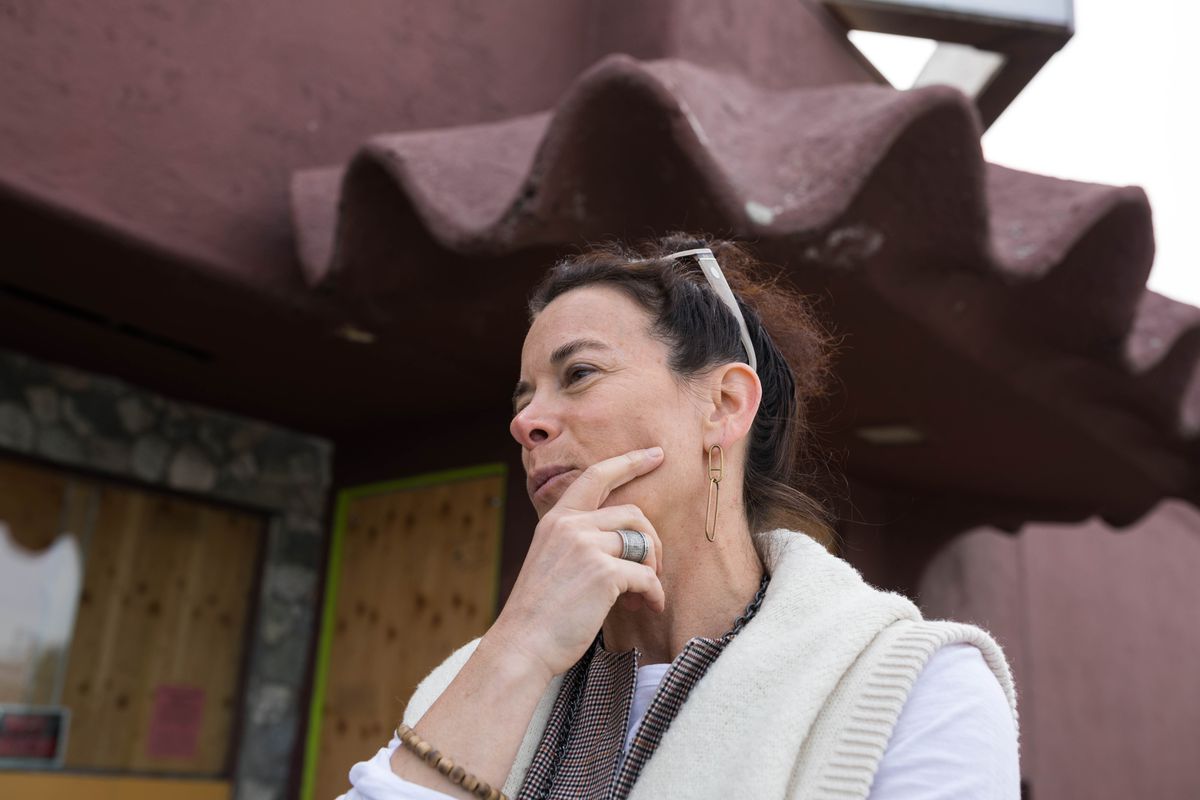 Cindy Berger, the new owner of the former Paradise Inn on Spenard Road, stands outside the building on Thursday, May 9, 2019. Berger plans to have the building demolished to make room for a parking lot. (Loren Holmes / ADN)

Cindy Berger, the new owner of the former Paradise Inn on Spenard Road, stands outside the building on Thursday, May 9, 2019. Berger plans to have the building demolished to make room for a parking lot. (Loren Holmes / ADN)

Cindy Berger thought at one point she could save the storied and derelict Paradise Inn in Spenard.

But Berger, who bought the building in November, said its poor condition gave her little choice but to tear it down. She also expected Anchorage’s modern building codes would make it challenging to build new, so for now, she’s planning to pave the land over as a parking lot.

“It’s one of those funny things...Oh, I really am paving Paradise and putting up a parking lot,” Berger chuckled, a reference to the 1970s-era, pro-environmental Joni Mitchell song “Big Yellow Taxi."

By the end of the summer, Berger expects the building with the clamshell awning and tiki-lounge vibe at 3001 Spenard Road will be gone.

[Spenard’s Paradise Inn, and its famous sign, headed for auction]

Once marked by the 22-foot-tall neon palm tree sign that glowed out front, the Paradise Inn has gained almost a cult status as a symbol of Spenard’s colorful past. It was built in 1962 when few hotels existed in Anchorage. Tourists once flocked there, but over the years, the hotel and bar devolved into a persistent neighborhood nuisance and magnet for drug and prostitution complaints.

When the owner was sentenced to prison in 2017 for selling meth, the United States Marshals Service and the FBI seized the inn and evicted people living there.

Berger, an attorney who now runs a real estate company, has owned the building right next door for years. She started putting in bids to buy the inn.

Her interest in revitalizing the neighborhood’s dormant properties aligns with that of her husband, Rod Hancock, whose company owns Moose’s Tooth and Bear Tooth. More recently, Hancock’s company has taken steps to convert the former La Mex building on Spenard Road into Anchorage’s first “food hall.” As the businesses evolved, so did the couple’s love of the neighborhood, Berger said.

“We both care a lot about Spenard,” Berger said.

Berger hoped to salvage the Paradise Inn and retrofit it, which would allow her to keep the building’s current dimensions. But she said it quickly became clear the building couldn’t be saved. Its condition warranted condemnation, she said. After repeated bids, Berger paid about $145,000 to the federal government, the land minus her estimated demolition cost.

Modern building codes would likely require a much smaller footprint for a new development, Berger said. She isn’t ruling out a new building in the future. But for now, she said, the option that makes the most financial sense is a private parking lot. The lot will serve the building she owns next door, which is currently a maintenance shop for Moose’s Tooth and Bear Tooth.

She plans to bring in art and landscaping. The concrete firewall that her building shares with the Paradise Inn will serve as a base for a mural, adorned with tall trees, Berger said.

Berger also wants to repatriate the neon palm tree back to the lot. In 2018, a group of Spenard locals pooled money and bought the palm tree at auction. It’s now sitting a few blocks away behind a fence.

Berger, who was traveling when the auction happened, wants the palm tree to be part of the mural. The owners of the tree, though, have different ideas. Community organizer Jay Stange, one of the nearly 60 people who bid on the tree at auction, says the tree should go on public property. He has proposed carving out a 100-square foot piece of Berger’s property and installing the palm tree at its old spot as Anchorage’s “smallest park.”

Berger said she plans to keep working with Stange and watch how new development continues to evolve in Spenard.

In the meantime, she may have to get rid of something besides a derelict building. Someone who toured the Paradise Inn recently with Berger told her there was a spirit in the basement.

Berger, not taking her chances, has since hired a medium to come in and encourage the spirit to move on.

It’s an odd twist in an already odd story, Berger said: She doesn’t want a spirit stuck under the parking lot.

“I want to get the palm tree back, and the ghost gone,” Berger said, standing outside the inn recently, smiling.