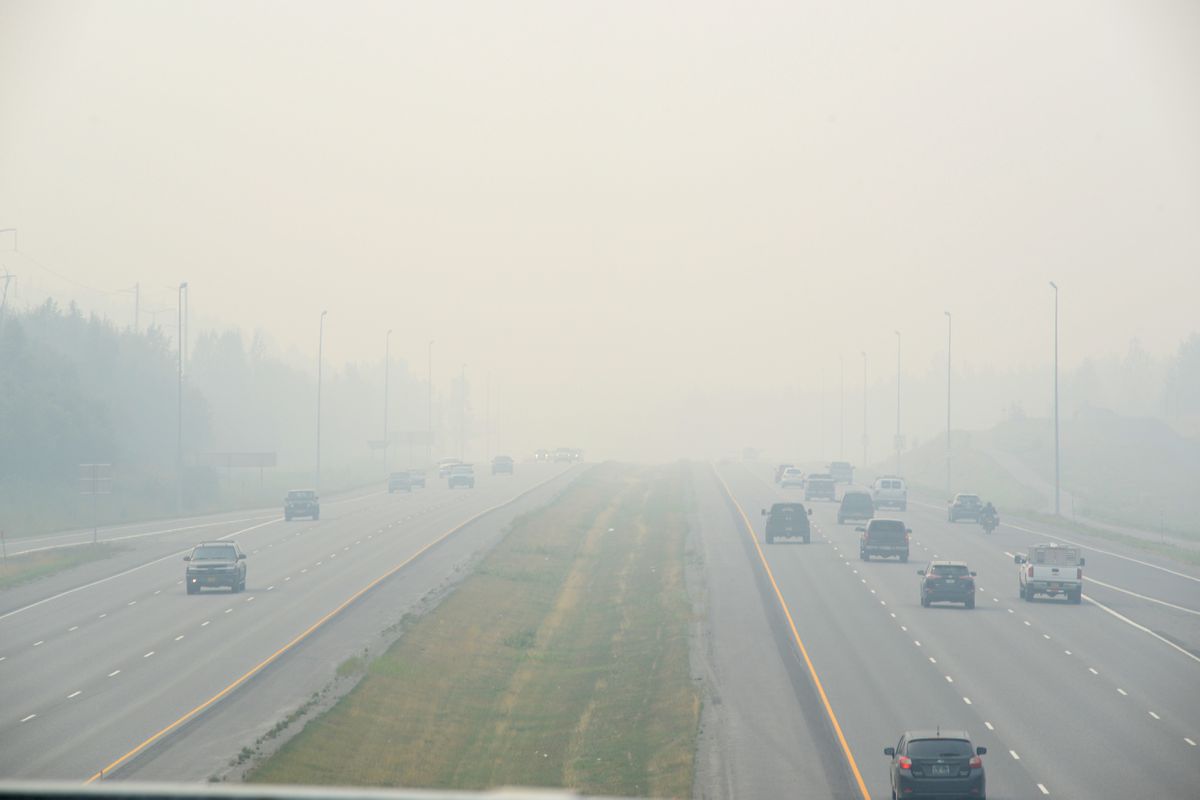 The air quality in Anchorage on Monday reached “unhealthy” levels, prompting the municipal health department to issue an air quality advisory, as smoke from multiple wildfires continued to choke the region.

The municipality advised those who are sensitive to air pollution to stay inside, and urged everyone to avoid strenuous outdoor exercise while the advisory is in effect.

After days of strong, northerly winds that ignited destructive fires near Willow and awakened the relatively dormant Swan Lake fire on the Kenai Peninsula, the winds calmed on Monday, allowing the smoke to settle.

“It was actually drifting from Swan Lake fire northward and really just was kind of able to hang out,” said meteorologist Kaitlyn O’Brien of the National Weather Service in Anchorage.

O’Brien said the smoke was expected to stick around until at least Tuesday afternoon.

“We’re not really seeing enough wind to take it out of the area,” she said.

Anchorage saw its particulate matter climb to a level of nearly 200 on Monday, well above the threshold of 50 that is considered “good.” At that level, residents will likely begin to experience some negative health effects, especially members of sensitive groups, like those with respiratory conditions.

In the Mat-Su Borough, where the McKinley and Deshka fires have been rapidly spreading since Saturday, the air quality was even worse, reaching the highest level: hazardous.

Sensors near Cooper Landing, which is under a level one “ready” evacuation notice from the Swan Lake fire, recorded similarly sky-high levels.

However, Mikal Canfield, a spokesman for Providence Alaska Medical Center in Anchorage, said the hospital has not seen an uptick in patients coming to the emergency room with smoke-related complaints.

Alan Brown, a spokesman for the Anchorage School District, said Monday afternoon that any changes to school or activities schedules would be decided on a school-by-school basis.

“Because we’re so spread out, it could be moderate at one location and good at another location,” Brown said.

The Houston Fire Department said in a Facebook post Monday said Houston Junior Senior High School would be “taking some actions to mitigate the health risk to students.”

“Parents and guardians are advised that they can pick up their students from Houston at any time they feel it necessary for their health and their absence will be excused,” the fire department said.

All schools north of Houston were closed because of the wildfires Monday, according to the department.