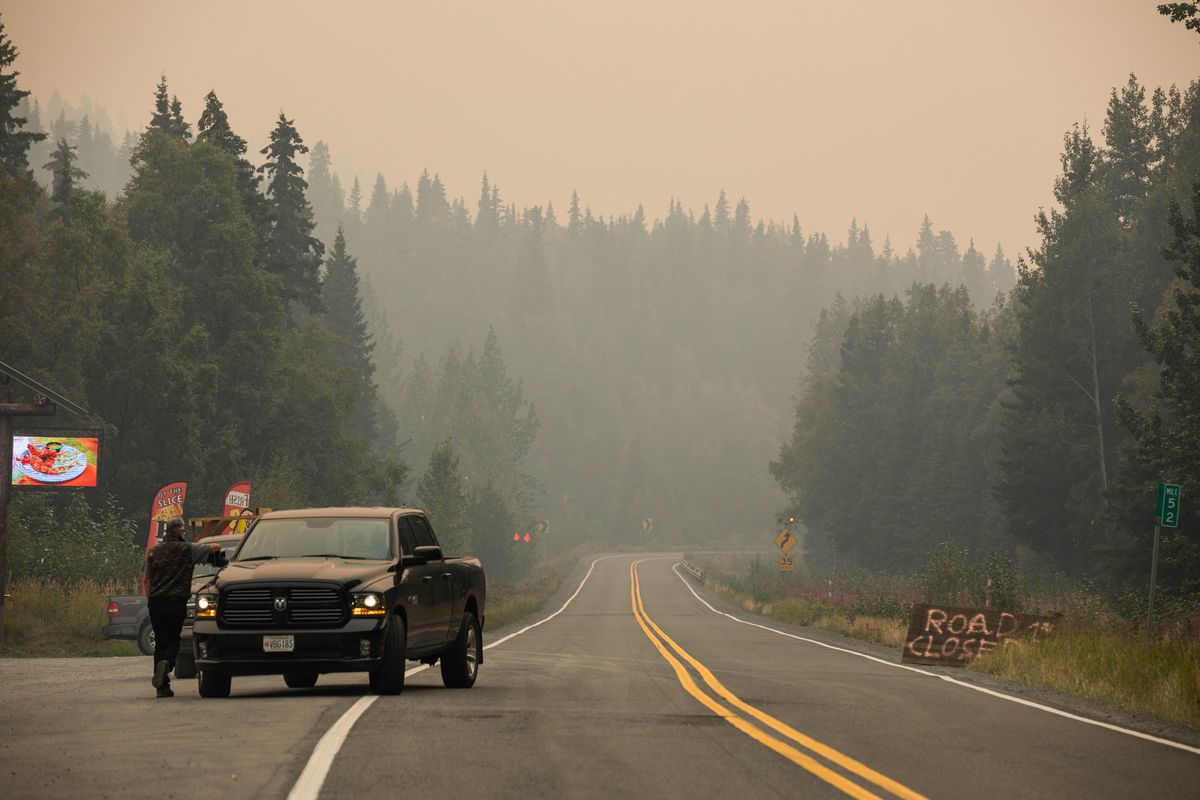 Northerly winds with strong gusts caused the 103,000-acre fire to swell to about 112,000 acres between Saturday and Sunday, moving quickly to the south and east, according to estimates from the Alaska Division of Forestry.

Brentwood Reid, the incident commander for the fire, said in a Facebook Live stream that the wind has caused the fire to act “somewhat beyond what models are able to predict.” Early on Sunday, the fire jumped the Sterling Highway near mile 60, near Skilak Lake Road, and continued to move east toward Cooper Landing, forestry officials said.

Firefighters tried to contain the fire on the south side of the highway but “it grew so fast it was beyond what they could do," Reid said.

By Sunday evening, the western edge of the fire was about 5 miles from Cooper Landing, fire officials said.

The highway was shut down between miles 53 and 75 on Sunday, and was expected to remain closed into Monday, Alaska State Troopers said in an alert.

"However, there is no guarantee it will open then and, even if it does open, it’s not known when that might happen,” the Kenai Peninsula Office of Emergency Management said in a Facebook post.

Drivers were told not to use Skilak Lake Road as a detour, and some turned around while others pulled off, stranding themselves for the night along the Kenai River.

“We’ve got traffic backed up and we need people not to use the Sterling Highway while we have the Swan Lake fire impacting it,” said Sarah Saarloos, an information officer with the Division of Forestry.

The highway closure backed up traffic for as much as 15 miles on the eastern side, Reid said. Visibility on the highway was at times reduced to as little as 10 feet, he said.

A few people walked up and down the line of stranded cars trying to get rid of perishable food they’d brought with them. Katy Bethune said she had two coolers of apples she’d picked from her mother’s apple trees in Palmer. She was giving away the apples for free to anyone that would take one.

“It was that or make apple sauce,” she laughed.

Brent Boyd, 31, tried with little success to sell the melting popsicles he had with him for $2 before giving them away, as well.

Some stranded travelers said they opted to stay at nearby campgrounds, and others flooded hotels in Cooper Landing. Lina Lopez, of Wasilla, said she and her family found a friend to stay with after they hit the closure while driving up from Homer.

“On the way back to Wasilla we were wondering why so many cars were headed the opposite direction than us,” Lopez said in an email.

In the nearby community Cooper Landing, residents were preparing for potential evacuation. The tourist-driven community is under a level 1 “ready" order to be ready to evacuate, said Dan Nelson, emergency manager for the Kenai Peninsula Borough.

“The fire is right adjacent to and impinging on road in certain places,” Nelson said in a video update.

Tyler Paul, 18, works at Kenai Cache Fly Outfitters in Cooper Landing and said on Sunday that fire officials had already been through earlier in the day to notified the outfitter of the evacuation status.

"It if gets to set we’re shutting the shop down” Paul said, referring to the second possible level of evacuation order, which requires residents to be ready to leave at a moment’s notice.'

Right next door at Gwin’s Lodge, staff were packed and ready for evacuation. Kat Ross, the front house manager at Gwin’s, thought it was a real possibility the lodge would need to evacuate a moment’s notice.

“It’s at Resurrection Pass,” Ross said, “and that makes me very nervous.”

Brian Atkins, a property manager at the lodge, said he was packed up. He was worried that the Swan lake Fire was now, after several months of burning, threatening the lodge.

“They could have put it out if they wanted to,” he said, but they had not.

“Cooper Landing is a town, and it might only have 250 people, but it’s a town worth saving,” Atkins said.

The Swan Lake fire started in what fire managers call a “limited protection area,” meaning a place that’s relatively far away from people, where the danger of the fire wouldn’t justify the risk of sending firefighters to fight it.

Unlike fires in “critical protection areas,”which are near people and see an immediate, aggressive response, fires in limited protection areas are typically left to serve their natural, ecological purpose.

That response has garnered criticism from Kenai Peninsula residents like Atkins, who say they see it as too passive.

Crews were being removed from the Swan Lake fire after lower temperatures and rainfall calmed the fire’s activity last month. Less than a dozen firefighters were working on the fire before it spread on Saturday; now, about 20 are battling the flames and another 100 are coming from the Lower 48, Saarloos said.

The Alaska parks division has also closed the Upper Kenai River to the public use between the the Cooper Landing state boat launch and where the river enters Skilak Lake.

Most Kenai Peninsula schools are expected to begin the school year on Tuesday as scheduled, the borough said in an update. Kenai Peninsula School District officials will determine on Monday whether Cooper Landing School would postpone its first day of school.

“The winds are predicted to decrease this evening, which will assist the firefighters in being able to secure the highway corridor, which is our main priority, along with the protection of the community of Cooper Landing,” Saarloos said.

The fires come amid an unusually active wildfire season that has seen record high temperatures and severe drought extending from the Susitna Valley to the eastern Kenai Peninsula.

The air quality in Cooper Landing rose to “very unhealthy” levels Sunday as the approaching fire brought smoky conditions. Forestry officials said the smoke was not expected to improve for the community through the weekend.

The Kenai Peninsula Borough has set up a fire information line for the public at 907-262-4636.