A moose charged a 3-year-old in an Anchorage park. His father shot and killed it. 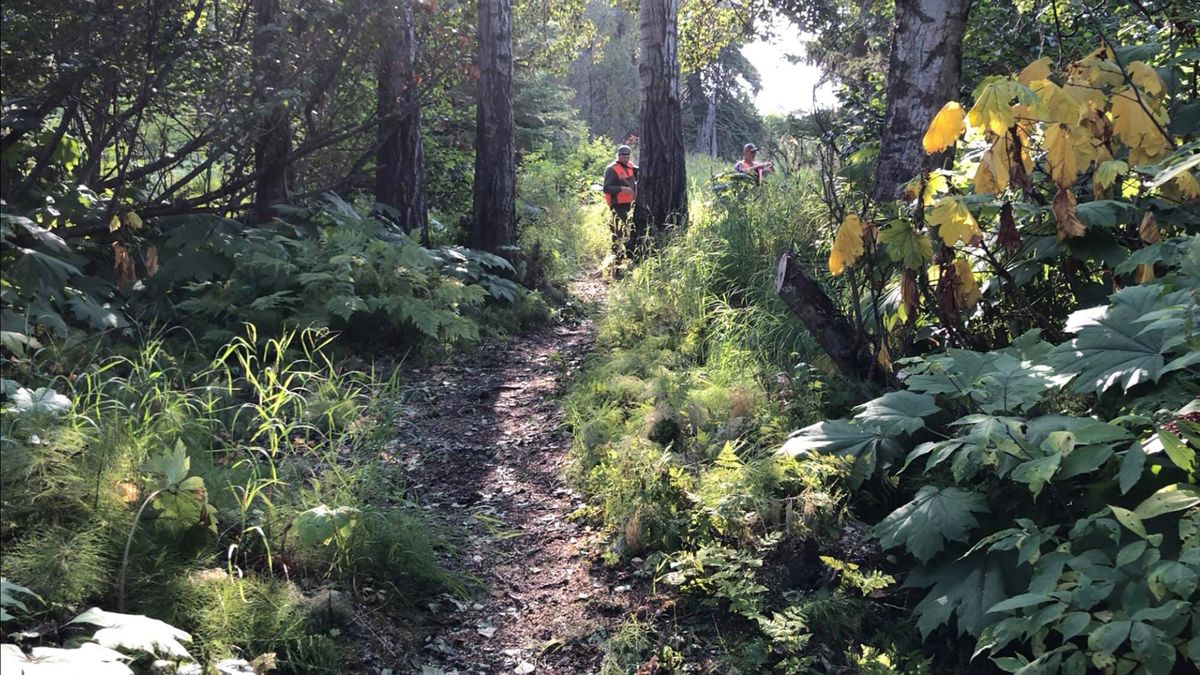 A trail on the edge of Kincaid Park was where Matt Sanders and his son Huxley encountered two moose, Thursday Aug. 22, 2019. (Photo by Matt Sanders)

A trail on the edge of Kincaid Park was where Matt Sanders and his son Huxley encountered two moose, Thursday Aug. 22, 2019. (Photo by Matt Sanders)

Matthew Sanders and his 3-year-old son, Huxley, were walking on a narrow trail on the edge of Anchorage’s Kincaid Park on Thursday when the boy turned a corner and ran into two moose in tall grass.

It was the kind of heart-pounding moment encountered by many hikers and cyclists in one of Anchorage’s biggest, most-used patches of wild land.

The Anchorage father says he was able to get between his son and the moose and pull a .44 Magnum from a chest holster. By then the moose was so close “all I could see was its nostrils and hairs,” Sanders later recounted in a Facebook post.

Sanders says he shot the moose, which ran into a thicket of horsetails and cow parsnip at the trail’s edge.

Then cow charged again, according to Sanders. This time the father, holding his 3-year-old, fired three shots.

“At that point, I turned around and started running with Huxley to safety,” Sanders said.

He says he didn’t see what happened to the other moose, a bull.

The incident marks the first time a moose has been killed for self defense in Kincaid Park this year, according to Dave Battle, area biologist with the Alaska Department of Fish and Game.

But it’s not the first time someone has shot a moose inside Kincaid in 2019.

In May, a moose stomped members of a family walking on the Middle Earth single-track trail at Kincaid, slightly injuring a mother and child. The father was carrying a gun and shot the animal, which ran off, Battle said. Biologists from Fish and Game searched for the moose, following a blood trail, but never found a carcass.

“We don’t know what happened to that moose,” Battle said.

Department biologists visited the scene of the moose kill Thursday and interviewed Sanders about what happened. The moose, determined to be about 2-years-old, was butchered for meat, which will be donated to a family in need through a Fish and Game program.

The incident seems to amount to a valid defense of life and property kill, the only legal reason a person can kill a moose in a city park, Battle said.

Incidents like this are a reminder that moose are unpredictable, and not just during the sensitive spring calving season and aggressive fall rut, Battle said.

“You can never tell what a moose just went through, before you had contact with it,” he said. “You can’t count on that moose acting the same as all the other moose you’ve encountered recently.”

A moose may be sick, or have encountered a predator, have been chased by a dog, he said. If something has a moose “ramped up,” it can react with sudden aggression, he said.

Kincaid Park is full of moose, though biologists don’t know precisely how many.

There are probably “dozens” in the 1,516 acre park in West Anchorage at any given time, Battle said. They are most often seen during the spring, summer and fall.

Thursday’s incident happened on an unnamed multi-use trail about a quarter mile from a trail head at the eastern edge of the park, close to the Tower Power mountain biking trails, according to Sanders and Battle.

Sanders said he and his son live nearby and have walked on the trail “hundreds of times” without incident, almost daily.

On Thursday morning, Sanders said he’d heard about bears on the trails that seemed unperturbed by human contact. At the last minute he decided to pack a .44 Magnum instead of bear spray. It was the first time he’d ever carried a weapon on that trail, he said.

He and his son were making “lots of noise” when he stopped to pull a piece of gum out of his pocket. That’s when the boy walked slightly ahead and encountered the moose, he said.

Huxley, the 3-year-old, was shaken by what happened.

“We had to start trying to talk about guns, gun safety,” Sanders said. “I took him the next day to go into the park, but before the woodline he got super scared. His eyes were up, looking around.”

Since then the boy has gotten comfortable in the woods again, Sanders said.

Biologists have heard of an “average to above-average” number of human-moose encounters in the Anchorage area this year, according to Battle.

It has been a “startlingly low” year for human-bear encounters, Battle said. He isn’t sure why.

If there’s a lesson to be learned from Sanders’ experience Thursday, it’s that moose are everywhere — and their behavior is impossible to predict with accuracy, Battle said.

Sanders said his big lesson is about being prepared.

“Wildlife, you never know what they’re going to do,” he said.