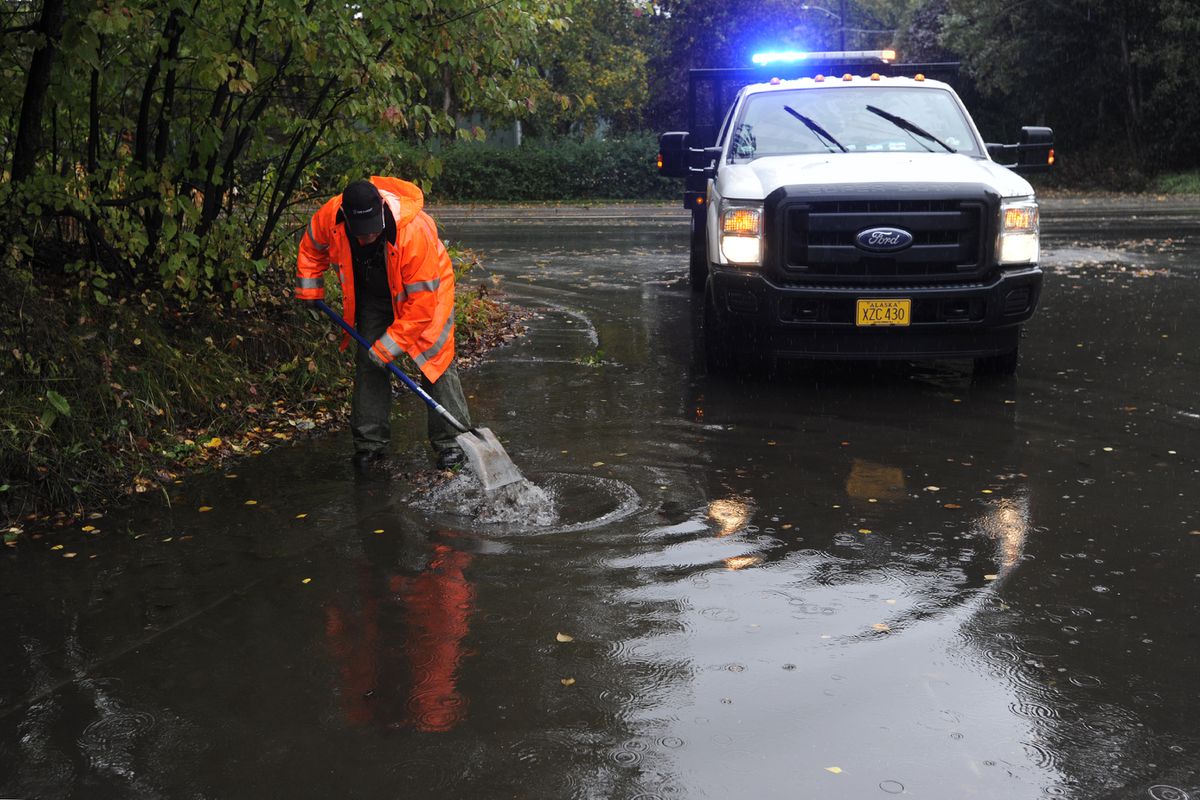 A city street maintenance worker clears leaves from a storm drain at West 18th Avenue and Arctic Boulevard during the rainstorm in Anchorage on Wednesday, Sept. 18, 2019. (Bill Roth / ADN)

A city street maintenance worker clears leaves from a storm drain at West 18th Avenue and Arctic Boulevard during the rainstorm in Anchorage on Wednesday, Sept. 18, 2019. (Bill Roth / ADN)

To make the fixes, they're exploring the creation of a stormwater utility for the Anchorage Bowl.

It'd be the first of its kind in Alaska, and would result in regular stormwater utility bills for Anchorage property owners, just like water and sewage bills, according to Jason Bockenstedt, deputy chief of staff for Mayor Ethan Berkowitz.

There is more research, layers of approval and questions to answer before a utility is started, including how much Anchorage businesses and homeowners would pay. That’s part of the next phase of work, Bockenstedt said. The city is negotiating a contract with a consultant to create a stormwater utility master plan and rate structure options.

At the earliest, if the utility is approved, the first bills could go out in about 18 months.

In Anchorage, the idea of creating a special utility to pay for the city’s stormwater system has been discussed for decades, and gained new traction under the Berkowitz administration.

The Anchorage Bowl has eight watersheds and an underground web of around 600 miles of storm drains, about 60% owned by the city and the rest owned by the state or Hillside service areas.

But Anchorage has never had a coordinated, citywide approach to maintaining and improving its stormwater system, Bockenstedt said.

“We have just failed to properly invest in this infrastructure,” he said. “This is not a five-year problem, this is a 50- or 60-year problem that has developed."

Instead, the city has been patching up or digging out rotting and cracked pipes as problems arise above ground, including pooling water and costly sinkholes. It relies on voter-approved bonds funded by property taxpayers to fix what’s broken, and it has a backlog of repairs, Bockenstedt said.

“At only $8 million per year being applied to the problem and system deterioration worsening each year, the current program is not able to meet the city-wide needs,” said a report published in January.

A recent assessment found that at least 70% of the city’s drainpipes are either nearly failing or have already failed.

The revenue generated by a new stormwater utility could allow the city to more systematically fix or upgrade its failing pipes and ease the burden on developers, city officials and other advocates say.

“It’s another tool in the toolbox that could have a fairly significant impact on the developing of housing,” said Bill Popp, president and chief executive of the Anchorage Economic Development Corp.

But not everyone is on board with the current process. The city has faced criticism from some who say it’s moving too fast and not sharing enough information with the public. Some also raised concerns about potentially big bills for large landowners, and said the creation of a new utility should be put to a citywide vote.

“I’m concerned with the process, which has been frankly very small on details, fairly nebulous,” Hugh Ashlock, partner in the Dimond Center, told the Assembly last month.

So far, the Anchorage Assembly in September authorized the city to borrow up to $1.5 million for the next phase of work on the utility project, and it approved the creation of a stormwater utility advisory commission. Also, in August, it established a stormwater utility in municipal code for “fund accounting purposes" as planning continues, according to the approved ordinance.

In June 2017, the Berkowitz administration signed a $250,000 contract with Stantec Consulting Services Inc. for work including compiling maps of the stormwater system and information to show why a utility is needed.

The upcoming reports will go deeper into the details, according to Bockenstedt. The city is also sending a robotic camera into all of its storm drains to assess the pipes’ conditions and to piece together an inventory, he said.

While the city doesn’t yet have specifics on utility fees, Bockenstedt said, the general idea is that property owners would get charged more or less based on the amount of “impervious surface” on their property ⁠— basically anything that repels water, like asphalt, brick or concrete.

The city would also consider incentives such as reduced bills if properties have rain gardens.

Under a utility, more people would pay for the city’s stormwater system than do now, because those exempt from property taxes would have to chip in, according to Bockenstedt.

“Currently, the way it is set up, some of the largest cost causes are the ones that are exempt from paying property taxes,” he said. “So we’re going to bring them into the fold and say, ‘You need to help pay for the infrastructure that everyone else is subsidizing for you.’”

Bockenstedt estimated that the incoming consultant’s work could take six to nine months. The city then needs the Assembly to approve the plan before going to the Regulatory Commission of Alaska for its consideration.