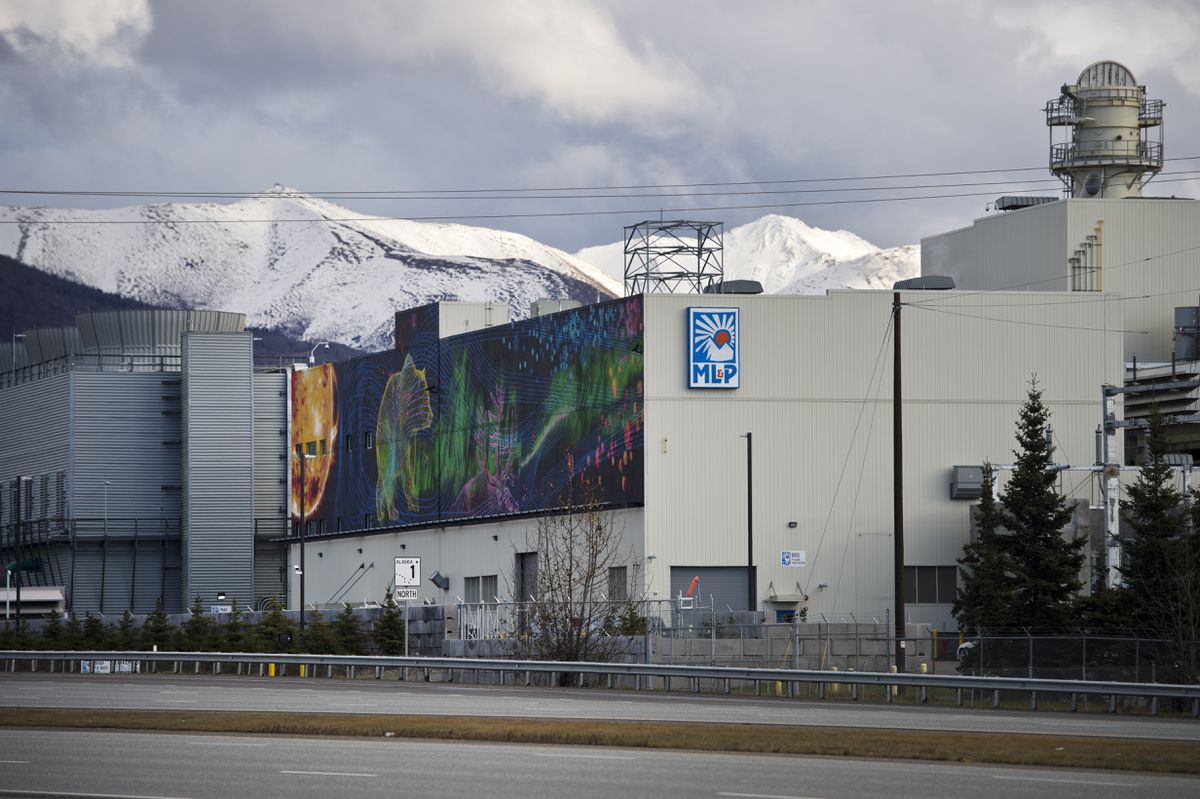 ML&P's Plant 2 and 2A power generation facilities near the Glenn Highway in northeast Anchorage. Photographed on October 28, 2019. (Marc Lester / ADN)

ML&P's Plant 2 and 2A power generation facilities near the Glenn Highway in northeast Anchorage. Photographed on October 28, 2019. (Marc Lester / ADN)

The city of Anchorage and Chugach Electric Association have reached an agreement on the sale of Municipal Light & Power, the city’s electric utility.

The agreement was struck Friday, and sent to state regulators Monday. It includes a $10 million reduction in price, bringing it to just under $1 billion. The hope is that the deal to sell ML&P to Chugach Electric will limit rate increases and stabilize the electric grid in the long run, while giving the city an immediate flow of cash.

“I think this is an important step for the city,” said Bill Popp, CEO of Anchorage Economic Development Corporation, which paid for a study on the idea and has long advocated for a joining of the two utilities.

Under the terms of the deal, the city can avoid near-term property tax increases, said city attorney Rebecca Windt Pearson. The city will set aside $36 million to protect customers in the existing ML&P footprint from rate increases due to the sale for the first three years, and overall rate increases are projected to be less sharp under one large utility.

Also in the agreement, the city will use $15 million of non-earmarked funds in ML&P’s account to fund an addiction services facility. That was something Providence Health and Services lobbied for, Windt Pearson said.

“I think we reached a good deal that benefits all members of the community," Windt Pearson said.

The Regulatory Commission of Alaska has until Feb. 17 to approve the sale.

Chugach Electric declined to comment for this story. In a statement, Providence said it supports the acquisition and is following the process as ML&P’s largest commercial ratepayer.

The attorney general’s regulatory affairs and public advocacy division is the only party yet to approve of the deal. The division advocates for individual ratepayers to make sure the sale doesn’t adversely affect the public.

Jeff Waller, chief assistant attorney general, said the office sent questions to the city and Chugach Electric and is waiting for a response. He declined to comment on how close the office is to signing off.

“We’re still analyzing it,” Waller said of the agreement.

Upon the sale, the city will get $757.8 million up front from Chugach Electric. It will immediately pay off the roughly $530 million in bond debt held by ML&P. That debt relief prevents the city from having to increase property taxes in the short-term, according to Windt Pearson.

The Anchorage Assembly can then decide to use the remaining money to pay off further debt, or put the money in a city trust account.

The city will also absorb the unrestricted cash the utility has on hand. Under Monday’s agreement, the city will use $36 million of that for immediate rate relief for customers in the the existing ML&P footprint for the next three years.

“We’re going to end up with a more reliable electric grid, and I think we’re going to see rate growth flatten out, comparatively speaking, to what it would have been if we continued down the path of two separate utilities,” Popp said.

The city will also use $15 million to start building the Alaska Center for Treatment, a city-owned substance abuse prevention facility. The facility will be operated by a third party.

Funding social services from a sale like this is fairly common, Windt Pearson said.

In August, the parties started three weeks of hearings before the RCA. Commissioners — tasked with making sure the deal benefits ratepayers — identified several areas of concern.

Chief among them were whether the sale would lead to increased efficiency, whether the price reflected ML&P’s actual value and whether Chugach Electric is equipped to absorb the increased territory, according to RCA spokeswoman Grace Salazar.

Supplemental documents submitted to RCA show there was also concern with how the debt-funded sale would impact Chugach Electric’s credit rating. Representatives for Chugach Electric and the municipality testified that analysis from credit rating agencies found the sale to be safe move for the utility, and will provide it with more leverage.

The parties say that the new agreement addresses the concerns.

Hearings to assess the sale will resume Tuesday morning.

Editors note: This story has been updated to include comment from Providence Health and Services.

Correction: The upfront payment to the city will be $757.8 million, not $715 million as previously reported.