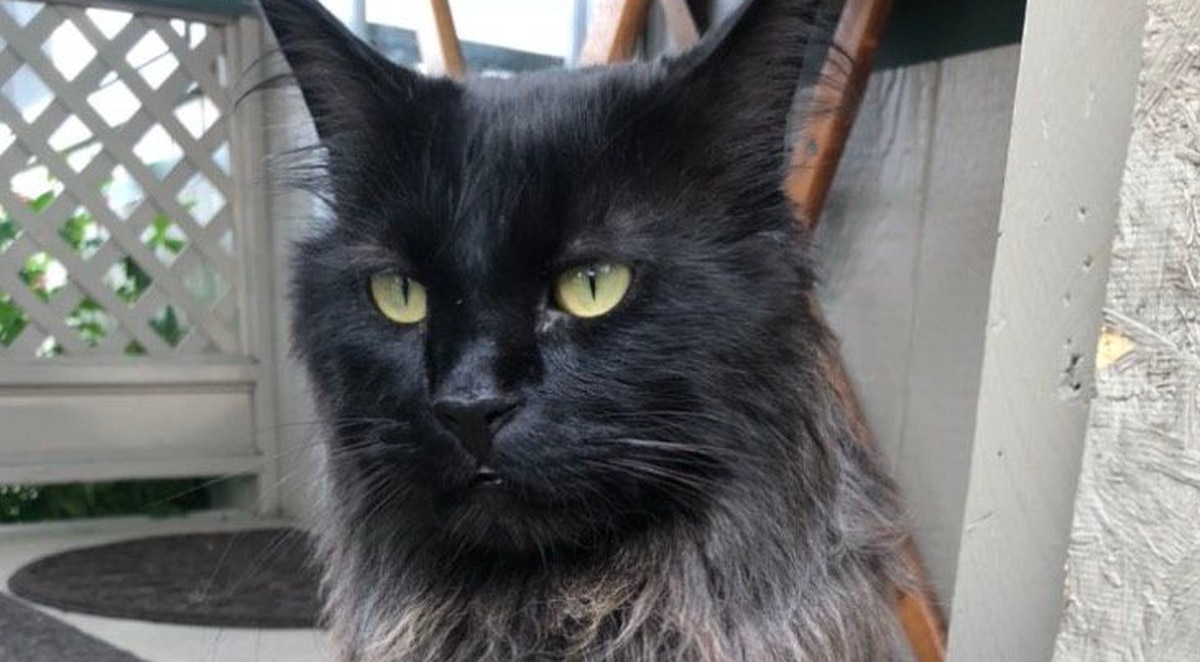 Lenny the cat survived what owner Torrie Ruhle believes was an attack by a wolverine around 2 a.m. Sunday, Nov. 10 2019 in the Elmore Road area of Anchorage. (Photo courtesy Torrie Ruhle)

Lenny the cat survived what owner Torrie Ruhle believes was an attack by a wolverine around 2 a.m. Sunday, Nov. 10 2019 in the Elmore Road area of Anchorage. (Photo courtesy Torrie Ruhle)

Between grogginess and the blinding ball of Christmas lights outside, Torrie Ruhle couldn’t tell what was attacking her cat on the front steps at 2 a.m. Sunday.

Her Great Dane, recovering from surgery, barked and woke Ruhle from a bed in the living room of her Anchorage home. She opened the door to find her cat mid-brawl with another animal and yelled to spook it.

It leaped a foot in the air. Then it didn’t leave.

Ruhle shut off the lights. She could see the animal pacing in the yard. Then it jumped the fence and the security light’s glare framed a distinctive shape.

“I knew instantly it was a wolverine,” she said Monday. “And it was huge.”

Ruhle lives in an Anchorage neighborhood on Elmore Road and East 66th Avenue where the city butts up against the muskeg and forest of the 730-acre Bureau of Land Management Campbell Tract.

She’s seen bears but never the elusive animals with a fierce reputation.

Lenny, her big, long-haired black cat, survived the encounter without injury. Ruhle crawled under the porch, where he was hunkered with a “don’t touch me" glazed look, and pulled him out.

His fur was covered in leaves — and slobber.

Lenny spent the rest of the night lying down with his eyes open and didn’t actually sleep until mid-morning Sunday, when he curled up in one of the chairs Ruhle uses for a day care business. Her other cat, normally submissive to Lenny, has been hissing and snarling at him.

Neighbors have told her that a wolverine has been spotted going after chickens, she said. The last she saw of the one that attacked her cat, “it just sauntered down the middle of the road.” A neighbor who heard the commotion said it took a left on Elmore.

Wildlife biologists say wolverines do wander close or into town. The neighborhoods off Elmore sit adjacent the largely undeveloped wildlife corridors of the Campbell Tract and Far North Bicentennial Park leading down from wolverine haunts in Chugach State Park.

Wolverines are in the weasel family: intelligent, crafty and tough, according to an Alaska Department Fish and Game report published in 2014 summarizing a state research project using GPS tracking collars. Big wolverines can reach 40 pounds. Small ones start at about 20. They hunt snowshoe hares, voles, ground squirrels and marmots but have been known to kill smaller Dall sheep. They also specialize in scavenging large animals.

“It is true that wolverines are very strong for their size and have incredible stamina ... a wolverine can cover 30 miles in a night, working a circuit in search of food," the report said. “They will den up and rest for brief periods, and then get back on the move.”

It’s possible the animal that Ruhle spotted Sunday morning was a young wolverine establishing its territory, but without knowing its age that’s impossible to say for sure, said Sarah Howard, curator at the Alaska Wildlife Conservation Center. The center’s residents include Kayle, a female wolverine.

Wolverines typically go after predators — a category that could include cats — to protect their territory or a kill, Howard said. But again, without more information, she can’t know if that was the case here.

“I’m impressed the cat got away from it,” she said.