The state wants a big new interchange on the Seward Highway in South Anchorage. Some Assembly members oppose it. 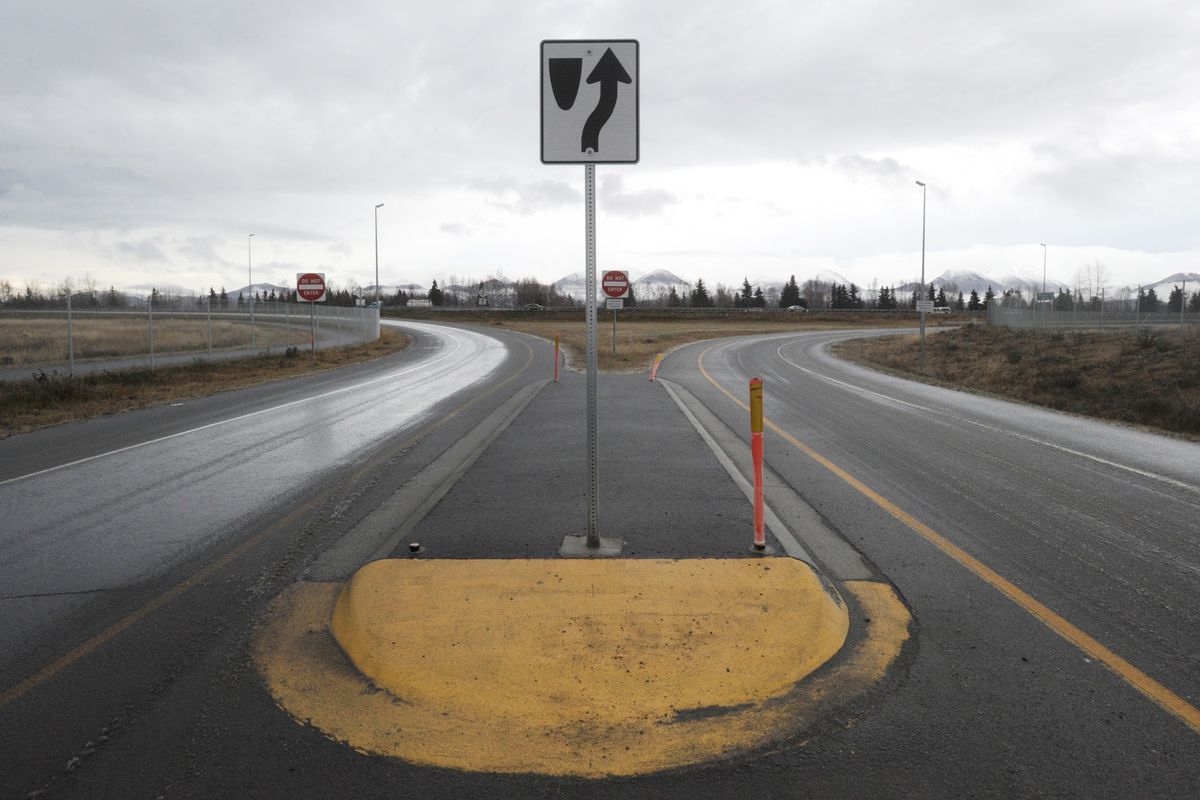 Some Anchorage Assembly members are trying to foil a portion of a state highway project nearly 20 years in the making, saying it’s a waste of public dollars.

After feeling strong-armed by Alaska Department of Transportation officials, the Assembly members say they are appealing their case to local legislators and have even entertained the idea of building a barricade to thwart the state’s efforts.

Assemblyman Forrest Dunbar plans to introduce amendments at Tuesday night’s Assembly meeting that could remove initial funding for the project from the proposed bond.

The transportation department wants to connect Academy Drive to Scooter Avenue, south of Dimond Boulevard, by lifting the Seward Highway and building a road underneath. It’s part of a larger collection of projects to improve the Seward Highway that have been in the works since the early 2000s.

At an Oct. 31 Assembly committee meeting, members expressed their concerns to the state transportation department’s project manager, Sean Baski. Baski indicated the state is not likely to reconsider its plans.

“I’ll just share a couple facts and repercussions that you may want to consider before moving forward,” Baski said. "Our project is moving forward and will continue to move forward. It is a juggernaut of a project. It is a significant project. In the state of Alaska, canceling out these kinds of projects do not occur.”

“I would caution you in the future from ending with a note that says ‘We’re going to do this and you’re going to deal with the consequences,' " Constant said. "I have a lot of things that I would like to say right now that wouldn’t be appropriate for the record. Be cautious, because it’s not fair and it’s abusive.”

The state’s portion of the project is estimated to cost $80 million to $100 million. Federal funds are covering 90%. Three million dollars was approved in a previous bond, and the city is proposing to include $4 million in the bond that will be put before Anchorage voters in April.

Anchorage Mayor Ethan Berkowitz’s administration does not have a position on the project. Kent Kohlhase, Anchorage’s director of project management and engineering, said the city would not consider this project if the state wasn’t planning to build a road into the neighborhood.

The city has been in talks with the state on the project since at least 2005. The state estimates the project will funnel around 12,000 additional cars per day onto Academy, a road east of the highway that terminates at Vanguard Drive, forming a “T.”

To avoid a traffic nightmare, the city will need to build a road that extends Academy past Vanguard and connects with Abbott Road.

Earlier estimates suggested that project would cost about $8 million. But new estimates from the Anchorage’s Project and Engineering Department say it will cost the city about $20 million.

That’s a significant chunk of the bonds for the next five years, said Assemblyman John Weddleton, whose district borders the project. Assembly members Weddleton, Constant and Dunbar fiercely oppose the city bonding for the project.

Weddleton said 20 years ago, the project was needed to alleviate traffic at the Dimond Center, a mall at Dimond Boulevard and Old Seward Highway. Then Tikahtnu Commons, a shopping center on the north end of the city, was built. It alleviated traffic around the Dimond Center and negated the need for further traffic-reduction projects, Weddleton said.

Municipal Manager Bill Falsey identified three projects that have been kept off the 2020 bond due to the inclusion of the Academy road project.

• Construction upgrades to West 32nd and 33rd avenues at a cost of $1.5 million.

• Upgrades to 48th Avenue and Cordova Street at a cost of $1 million.

Weddleton claims the state believes the disputed portion of the road project is not needed, but significant changes would require a new environmental assessment, delaying roadwork.

Asked about Weddleton’s comments, transportation department spokeswoman Shannon McCarthy acknowledged significant changes to the project would require a new environmental assessment. McCarthy did not comment on whether the state still thinks the road connection is needed.

Kohlhase said the idea of building a barricade to dead-end the state’s new road was floated in a meeting with city officials. That idea was presented to the Assembly last week, where some members were skeptical and others were intrigued.

"The administration thought it was at least appropriate to show that to the Assembly,” Kohlhase said.

Kohlhase said if the Assembly wants to go that route, more analysis is needed. He said he was not sure a barricade would entirely defeat the state’s objective for building the road.

“I don’t know that it would undo, or make their work not beneficial," he said. "It would certainly change the outcome of their work.”

Dunbar said he plans to make motions to amend to the bond proposal — one to delete the $4 million bond proposal and two others that appropriate the money to other projects.

McCarthy, the transportation department spokeswoman, emailed a statement saying the state has been in contact with the city about the project for years.

“We understand that the municipality is now discussing the need, purpose, and costs of their project and we look forward to hearing the outcome of that discussion,” McCarthy said in a statement.

The Assembly could vote Tuesday on whether to keep $4 million for the road project on the bond proposal.