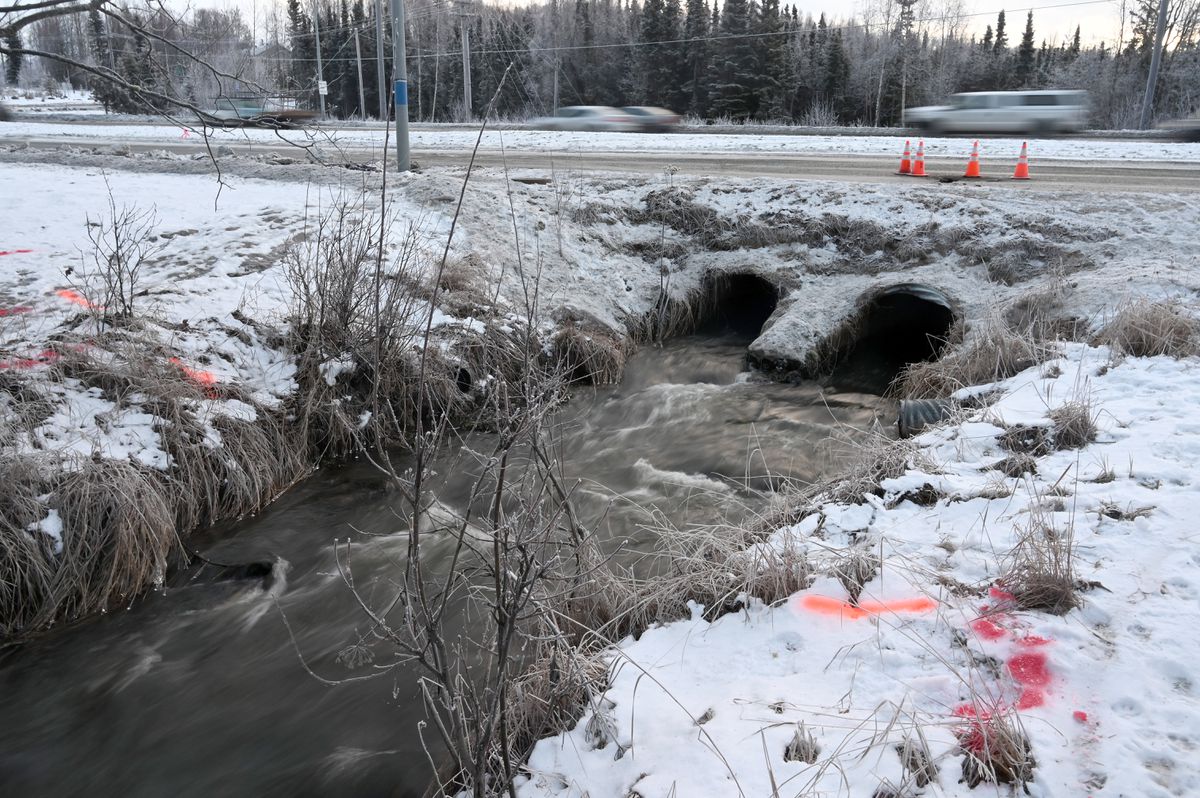 A sinkhole that opened up Wednesday morning Dec. 11, 2019, in the westbound lanes of Northern Lights Blvd. is directly over the culverts carrying Chester Creek under the roadway. (Anne Raup / ADN)

A sinkhole that opened up Wednesday morning Dec. 11, 2019, in the westbound lanes of Northern Lights Blvd. is directly over the culverts carrying Chester Creek under the roadway. (Anne Raup / ADN)

Update, 6:45 p.m. Saturday: All lanes have reopened on westbound Northern Lights Boulevard between UAA Drive and Career Center Drive, near the University of Alaska Anchorage, according to Anchorage police.

Repair of a washed-out roadbed in the westbound lanes of Northern Lights Boulevard near the University of Alaska Anchorage could keep the road closed through the weekend, officials said.

Corrosion on two side-by-side culverts that allow Chester Creek to flow underneath Northern Lights caused the water to wash out the roadbed underneath the pavement between UAA Drive and Career Center Drive, said Chelsea Ward-Waller, a spokeswoman for the municipal project management and engineering department.

The 60-inch steel culverts were installed in 1981, Ward-Waller said.

Ward-Waller said crews were still assessing the situation Wednesday afternoon, but the road will likely need a total repair because the pipe underneath “is corroded and collapsing and causing road failure.”

Crews will begin a temporary repair this week, which Ward-Waller said will likely require asphalt to be torn off the westbound portion of Northern Lights Boulevard so crews can reach the damaged pipes.

Ward-Waller said crews hope to have Northern Lights open by the end of the weekend.

“We want to open the road again as soon as possible,” she said.

The damage is contained to the westbound lanes for now, but Ward-Waller said there is concern the aging pipes could fail along the other side of Northern Lights. The area will require more permanent repairs that will likely happen during the summer, according to Ward-Waller.

A sinkhole closed nearby Providence Drive in March when nearly 40-year-old culverts failed and the creek washed earth out from under the roadway.

Municipal street maintenance manager Paul Vanlandingham said it’s too early to say what specifically caused the pipe to fail, but it may have been exacerbated by the recent freeze-thaw weather patterns.

“I’m sure that the extra water that doesn’t traditionally run in December exacerbated the problem, but it’s also just the pipe’s age,” he said.

“They were patching a pothole -- you can see the fresh asphalt on the outsides -- and they were running a compactor on it and it just kept falling in,” he said.

Vanlandingham said crews are working to repair potholes across the city, and drivers can report holes by calling 907-343-8277.

The city has filled 13,280 potholes since Jan. 1, Ward-Waller said. There are generally more problems reported during the spring, as ice melts.