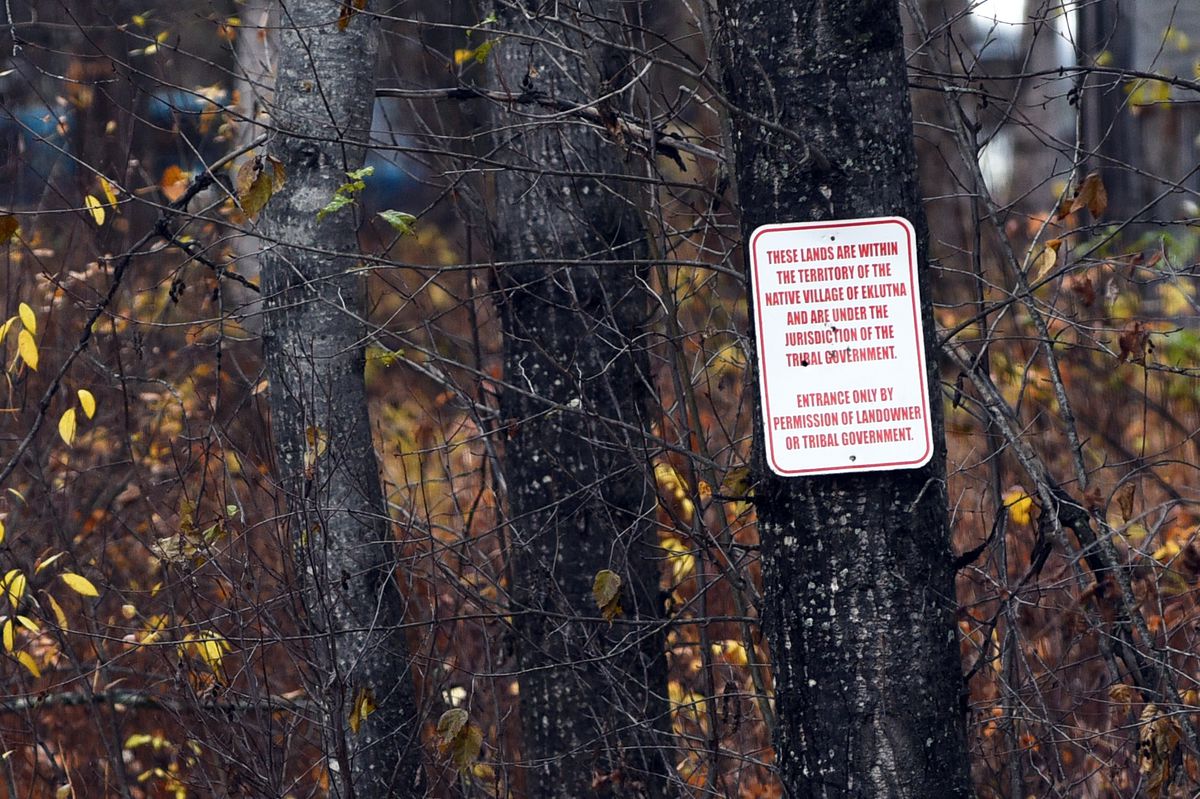 A sign marks private property on land near Birchwood Spur Road in Chugiak at the center of the Native Village of Eklutna's push to open a gaming facility. (Matt Tunseth / Chugiak-Eagle River Star)

A sign marks private property on land near Birchwood Spur Road in Chugiak at the center of the Native Village of Eklutna's push to open a gaming facility. (Matt Tunseth / Chugiak-Eagle River Star)

The state of Alaska is opposing a federal lawsuit brought by the Native Village of Eklutna as it attempts to build a tribal gaming hall about 20 miles north of downtown Anchorage.

According to documents filed Tuesday in U.S. District Court in Washington, D.C., the state believes other Alaska tribes will open similar operations if Eklutna succeeds in overturning a federal opinion and opens what Anchorage Mayor Ethan Berkowitz has called “a modest Class II casino.”

“A ruling that the opinion is invalid may open the door to (Indian Gaming Rights Act) gaming on other properties across Alaska,” wrote assistant attorney general Lael Harrison.

“And this case implicates more than just IGRA. ... It is about the territorial jurisdiction of Alaska tribes in general,” she said, asking the district court to allow the state to intervene in the lawsuit on the side of the federal government.

Court documents indicate neither the plaintiff nor defendant have formally responded to the request.

Officials from the Alaska Department of Law were unable to comment on the intervention Tuesday, ahead of the New Year’s holiday.

Eklutna is a Dena’ina community within the Municipality of Anchorage, and the Native Village of Eklutna is a federally recognized tribal government.

Eklutna’s lawsuit, filed in August, does not make statewide claims. Instead, it seeks to overturn a 2018 ruling by the Department of the Interior that a particular parcel of land near the Birchwood Airport in Chugiak is not “Indian lands” and is thus ineligible to host a tribal gaming hall.

Colin Cloud Hampson, an attorney representing the Native Village of Eklutna, said Tuesday afternoon that he had not yet had a chance to review the state’s filing.

The facility would not host blackjack, slot machines and similar Vegas-style games, which are not authorized under state law. Instead, activity would be limited to games like pull-tabs, bingo and lotteries — and possibly electronic versions of those games.

Unlike in the Lower 48, which has many Indian reservations, most Native lands in Alaska are owned by Native corporations representing Native shareholders, following passage of the Alaska Native Claims Settlement Act in 1971.

Alaska’s tribal governments are sovereign but have little or no land on which to exercise their laws. “Indian Country,” as it is formally known, is limited to Metlakatla — the state’s only Indian reservation — and more than 16,000 small family allotments held in trust by the federal government.

Eklutna claims territorial jurisdiction over one such allotment north of Anchorage, and it says that jurisdiction gives it legal grounds to build a gaming hall. When the federal government denied that Eklutna has jurisdiction, the lawsuit followed.

The state of Alaska has historically opposed attempts by tribal governments to exercise jurisdiction, citing fears that the state could devolve into a patchwork of conflicting laws.

In 2007, the state voiced its opposition to the idea that Eklutna had sufficient jurisdiction to build a gaming hall, and Tuesday’s filing is in line with that past opposition.