Passenger in car shot and killed by officers had fired at them during traffic stop, police say 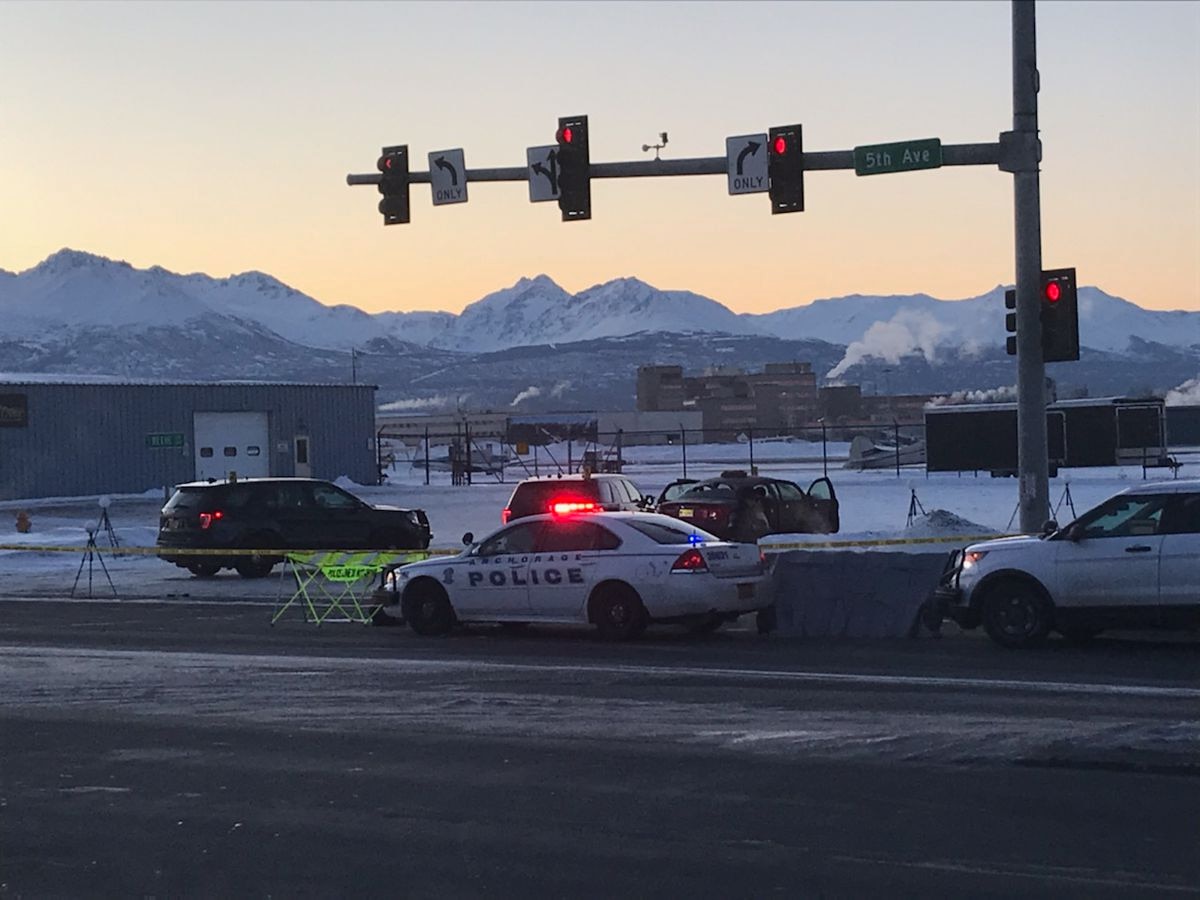 Anchorage Police investigate an officer-involved shooting Sunday, Feb. 16. One male was fatally shot after he fired at two officers, police said. One of the officers was wounded by gunfire. (Tess Williams / ADN)

Anchorage Police investigate an officer-involved shooting Sunday, Feb. 16. One male was fatally shot after he fired at two officers, police said. One of the officers was wounded by gunfire. (Tess Williams / ADN)

A person was shot and killed by Anchorage officers early Sunday near the Merrill Field airport after firing at them from a vehicle, police said. One officer was injured by gunfire.

Two officers stopped a vehicle for a traffic violation near Fifth Avenue and Reeve Boulevard around 3:30 a.m., Police Chief Justin Doll said in a news conference early Sunday morning. A male passenger in the back seat of the vehicle fired shots at police, Doll said.

The officers returned fire and fatally shot the person, Doll said. None of the other four people in the vehicle were injured, Doll said. One of the officers was shot in the upper body and has minor injuries, but was protected by his body armor, according to Doll.

The others in the vehicle were being questioned by police Sunday, police said.

“Today we are just extremely relieved that our officers’ training and equipment allowed them to go home and be with their families and suffer only minor injuries as a result of this -- very, very relieved that we don’t have an officer that’s more seriously injured."

Around 8:30 a.m., officers taped off an area in front of the airport. A red sedan was parked with all four doors open. The westbound lane of Fifth Avenue was closed near the area.

The names of the officers involved will be released in 72 hours according to department policy. Police will name the person killed once his next of kin has been notified.

Doll said the Office of Special Prosecution will investigate the incident and the police department will also review it internally.

This is the third officer-involved shooting of the year, and the first deadly incident.

In January, 35-year-old Dustin Folse aimed a crossbow at officers who subsequently fired shots at him. He was shot in the leg, and a stray bullet pierced the window of a nearby laundromat.

On Feb. 5, an officer fired at 31-year-old Logan Parrigin outside a Northway Mall trampoline park. Parrigin suffered non-life-threatening injuries, police said. Investigators found a stolen gun in a trash can inside the store, according to a charging document for Parrigin.

Correction: A previous version of this story incorrectly said Folse was not injured.