This emergency management specialist has spent years planning for a moment like this. Here’s how an Anchorage hospital is preparing for COVID-19. 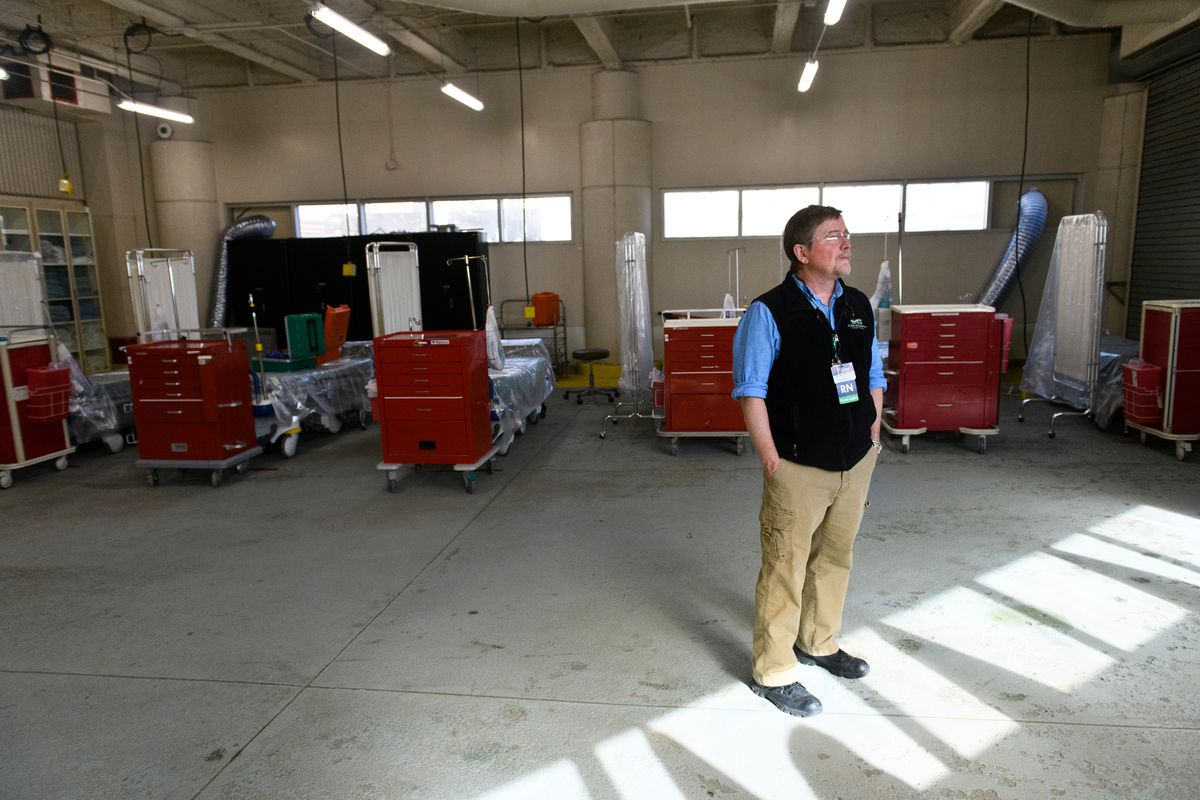 In early January, Sean Murphy, emergency management specialist for Alaska Regional Hospital, had a message for the other hospital leaders.

“I said, ‘There’s something coming out of China, and it’s growing, and it’s going to be on our radar,’” Murphy said.

“I was hoping to be wrong.”

He wasn’t. On March 11, the World Health Organization declared the new coronavirus a pandemic. By Thursday, WHO reported more than 900,000 cases and 45,693 deaths worldwide. Alaska officials confirmed 147 cases and three deaths by that day.

This week, Murphy stood in a transformed ambulance bay on the Anchorage hospital’s east side. It took just weeks to convert the space into a treatment room for people with symptoms of COVID-19, the disease caused by the new coronavirus.

The room will be an important tool in the hospital’s strategy to confront the pandemic. It will be the first stop for the hospital’s patients who are in stable condition and suspected of having the disease. Preparing it has been the culmination of years of planning, Murphy’s experience with other disasters and a sprint to get equipment and people in position as the global coronavirus crisis drew near.

“March was a hell of a year,” Murphy said.

Preparing for disaster situations has been Murphy’s full-time job for three years, and this week he shared his perspective on what that has meant for him and for Alaska Regional Hospital.

Murphy’s specialty is to research and anticipate what will be needed in moments like this, and not just for the hospital. Murphy is also part of the Joint Medical Emergency Preparedness Group that plans with hospitals and other health care providers in Anchorage, Joint Base Elmendorf-Richardson and the Matanuska-Susitna Borough.

Planning for and responding to disasters has been a thread in his career for 15 years. Murphy, a registered nurse, is part of a 50-person Massachusetts-based Disaster Medical Assistance Team, which has deployed after several major hurricanes, including Katrina, Ike and Gustav, and to earthquake devastation in Haiti.

“We have tents and generators and supplies and wherewithal to basically set up a hospital where there isn’t one,” Murphy said.

“I’m planning for a Katrina-size event, and I’m hoping for it absolutely not to be,” Murphy said while standing in the converted room that now holds six hospital beds and several other chairs for patients. “I want to put all of this away unused,” he said.

Murphy said the ambulance bay has been in the back of his mind for years.

He first saw the potential to repurpose the space during a disaster drill five years ago. Tents are used by many hospitals to expand capacity in a crisis, but Alaska’s climate makes that tough. To make the bay usable would require wiring in more power, brighter lights and wireless internet, he figured. That work was done soon afterward.

But the bulk of the transformation began just two weeks ago. The floor was power-washed. Equipment including stretchers and cabinets that had been reserved or mothballed was located, inspected, cleaned and rolled into place. A secure medication-dispensing system and computer stations were installed. Three windows were removed to install vents for three large HEPA air filters. They keep air flowing away from the hospital.

The ambulance bay is ready to serve patients who are sick enough to come to the hospital with COVID-19 symptoms, but not sick enough to fill a critical-care bed. Soon, triage will begin in the hospital’s arctic entry. Patients with coronavirus symptoms will be redirected before they can walk through the front door to the emergency room.

In the ambulance bay, patients will be treated with supplemental oxygen, fluids and medication as needed. Once open, the room will be staffed around the clock by a nurse and EMT-level provider, at minimum, for as long as it has patients. An emergency room physician will cycle through.

“As numbers increase, we are more likely to increase staffing and dedicate a physician,” Murphy said.

Staff will monitor respiration rates, blood pressure, heart rate and oxygen levels. From this room, recovered patients will go home. Patients whose condition worsens would be admitted into the hospital and moved to rooms equipped for their care.

“This is a very serious disease that can move very quickly,” Murphy said.

That’s why Murphy doesn’t want to wait until Alaska Regional is seeing a surge to make use of the space.

“We want to get the kinks out before we’re overrun,” he said.

Converting the ambulance bay is just one way the hospital is preparing for a surge in COVID-19 patients. A dozen rooms inside the hospital have been converted to negative pressure. Twenty small rooms for preoperative patients are being readied for coronavirus care, as is space that had been occupied by physical rehabilitation equipment and offices.

“At each turn, we don’t want to get caught flat-footed,” Murphy said.

“If worst comes to worst, we’ll convert hallways,” he said.

Space is one of three main categories in disaster planning, he said. The others are people and equipment.

Alaska Regional Hospital spokesperson Kjerstin Lastufka said many employees have been cross-trained and redeployed to new medical assignments and screening checkpoints. Some come from surgical teams whose caseload decreased in the wake of State Mandate 5.1, which postpones non-urgent and elective procedures for several months. Employees who have been displaced are receiving 70% of their pay for up to seven weeks, according to a policy set by Alaska Regional’s parent company, HCA Healthcare.

Murphy also closely watches the “burn rate” at which the hospital uses supplies like masks and gowns. A nationwide shortage in PPE -- personal protective equipment -- has affected Regional, he said. They’re not out of masks, eye protection, gowns and gloves, but they don’t have an unlimited supply either, he said.

“While we don’t have stacks on stacks, I think we’ve got a good start,” Murphy said.

Alaska Regional employees now reuse their own masks that once would’ve been discarded after each patient. He carries his own surgical mask in his pocket, and monitors developments on how used masks might be sanitized and sterilized, he said.

“We are actually collecting all of our (used) PPE, all our masks especially, in hopes that in the short term someone comes up with an easy solution,” he said.

Managing Regional’s inventory of ventilators has also been a focus of preparations. The machines mechanically deliver oxygen to the lungs for the most acutely ill patients with COVID-19, a potentially lifesaving treatment. Ventilators are in high demand nationwide.

‘Hope is a terrible strategy’

In a way, Regional’s ready-but-empty ambulance bay is a sign of Anchorage’s unsettling uncertainty. No one knows how effectively the curve is being flattened here, or when it might spike. So far, the city has not seen the explosive coronavirus caseload that has stressed Seattle and overwhelmed hospitals in New York. But Alaska doesn't have the number of health care workers and facilities of those places either, he said.

“It wouldn’t take the volume to have the same effect (here),” Murphy said.

“I think hope is a terrible strategy,” Murphy said.

Alaska Regional expects to take its first COVID-19 patient in the ambulance bay in the coming days.