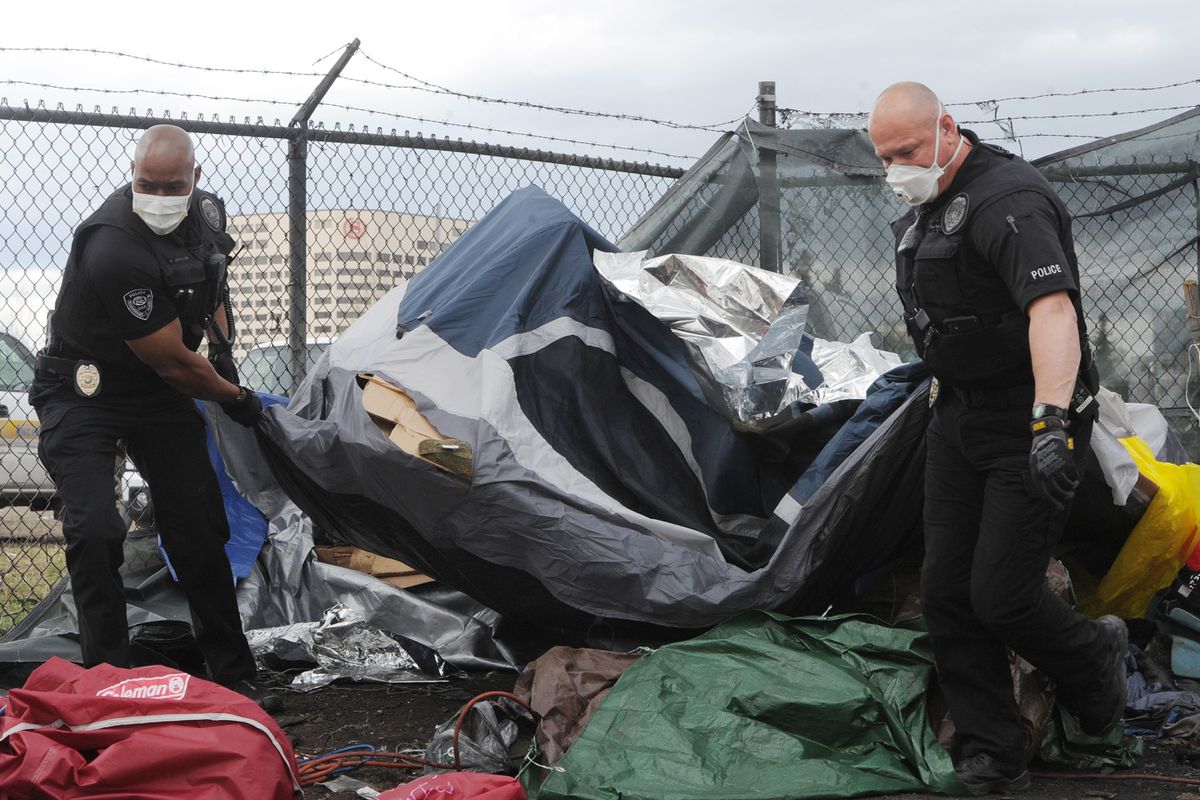 Anchorage Police Officers Damon Jackson, left, and Gordon Kovell remove a tent as officers with the community action policing team and Parks and Recreation workers removed and cleaned up an illegal homeless campsite near 3rd Avenue and Ingra Street on Monday, May 11, 2020. (Bill Roth / ADN)

Anchorage Police Officers Damon Jackson, left, and Gordon Kovell remove a tent as officers with the community action policing team and Parks and Recreation workers removed and cleaned up an illegal homeless campsite near 3rd Avenue and Ingra Street on Monday, May 11, 2020. (Bill Roth / ADN)

Monday was moving day for Jennifer Currie and other Alaskans living under tents and tarps at Third Avenue and Ingra Street, one of Anchorage’s most visible and sprawling homeless camps.

As green-vested parks and recreation staff moved in with plastic garbage bags and heavy trucks, Currie prepared herself and others to move. Weaving from tent to tent, Currie helped friends gather up belongings and place them into piles.

“These are the people I feel safest with,” Currie said.

A shiny, new fat-tire bike, a tablet and a generator were among the keepers. Throwaway items included large propane tanks, old clothes, mattresses and shipping pallets used to prop up the tents.

Some campers stuffed their belongings into grocery carts. Others had wheeled luggage to haul stuff away.

Where everyone would go next was unclear.

Currie, 47, was living at nearby Brother Francis Shelter until the coronavirus pandemic hit. When the shelter began limiting entry to elders and those with mobility constraints due to social distancing, Currie and others moved up the hill to the vacant lot at Third Avenue and Ingra Street, where the old Alaska Native hospital once stood. Currie’s journey into homelessness began after an abusive partner left her with a traumatic brain injury, a punctured ear drum, damaged eyesight and post-traumatic stress disorder, she said.

“I had two choices. I could stay with him or I could live, and come here,” Currie said, gesturing toward the greater East Third Avenue area. The neighborhood has grown into a flash point between people living in the camp and local businesses and homeowners angry over what they see as a rise in crime and disfunction.

The mother of grown children, Currie said she watches over younger women in the camp who are vulnerable to being assaulted.

“I’m scared most of the time,” she said. “I don’t want to live like this for the rest of my life.”

Signs saying the area would be abated, or cleared, in 10 days were posted April 30. Yet many people at Third and Ingra seemed unaware of the order to vacate.

As police arrived to assist parks and recreation staff on Monday, Aileen Kaaiai rolled into the lot in a gold GMC Yukon with a pitbull-looking dog in the front seat. She was there to provide transport to friends.

Originally from the Big Island of Hawaii, Kaaiai was formerly homeless and addicted to meth before case workers at Brother Francis helped her find treatment and housing, she said.

“It’s the hardest thing I’ve had to do in my life,” said Kaaiai about getting clean.

Kaaiai said her brother lived at the camp before accidentally shooting himself in early February. He later died at a local hospital, she said.

His pregnant fiancée was clearing out on Monday, and Kaaiai showed up to help her and other friends move.

“You do what you can to survive out here,” said Kaaiani.

“I don’t have any set plans yet,” Traylor said.

He tried the temporary mass shelters at the Sullivan and Ben Boeke arenas, where food, beds and social assistance are available to anyone who needs help. It didn’t work for him.

“Being cluttered like that,” Traylor said, shaking his head. “That’s a set up for failure.”

Traylor said he can’t work because his fingers are mangled stumps, damaged by frostbite during a winter living outside. He’s tried to get on disability three times and is appealing the denials of his applications, Traylor said.

Traylor said he doesn’t do drugs, calling them a “dead end.”

“I like to help people. I’m just like them. If we can’t come together as Alaskans, what can we do?”

Muralist Richard Zeigler biked to Third and Ingra to watch the camp being cleared and to make sure the rights of the homeless were being respected, he said. Zeigler, who goes by the nickname Ziggy, said the vacant lot could be turned into a productive work and living space.

“We need manufacturing. These people need jobs,” Zeigler said. “Everyone needs a foundation.”

“I was born here,” he said, packing his belongings.

Hernandez said it’s easy to look down on the homeless but people should have some compassion.

“One bad thing and this could happen to you,” Hernandez said.