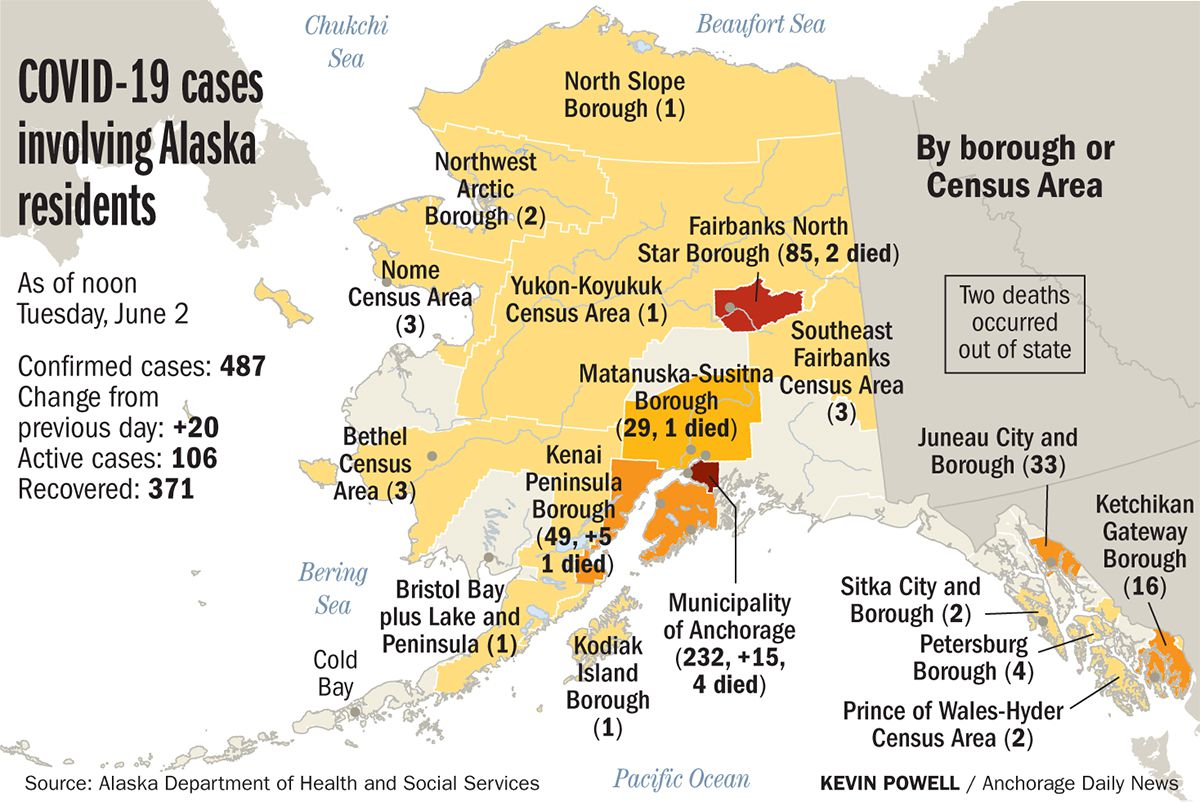 The new numbers come after the state logged its largest daily count of 27 new cases on Sunday. Another seven new cases were reported Monday.

Five of the positive test results reported Tuesday stem from an outbreak at the Providence Transitional Care Center in East Anchorage. In total, 23 residents and caregivers have tested positive as of Tuesday. Providence expected all the results of testing by Tuesday evening or Wednesday, according to Mikal Canfield, a spokesperson for Providence Health and Services Alaska.

One of the cases reported Tuesday in Anchorage involves someone who was recently admitted to the McLaughlin Youth Center, according to a statement from the Alaska Department of Health and Social Services on Tuesday.

The resident was isolated after the Division of Juvenile Justice learned of the positive test result, the department said. Public health officials are working to figure out which staff or residents at the McLaughlin Youth Center will get tested for the illness.

The Division of Juvenile Justice requires that youths entering their facilities quarantine for two weeks and tests all youths who are admitted, officials said in the statement.

“All of our facilities have identified areas where youth either quarantine or isolate,” Tracy Dompeling, director at the Division of Juvenile Justice, said by email Tuesday.

There are currently 86 youths at the McLaughlin Youth Center, Dompeling said.

Additionally, a seafood industry worker who is not an Alaska resident tested positive for COVID-19 in the Valdez-Cordova Census Area, the state reported Tuesday. The 22 non-resident cases of COVID-19 are not included in the state’s total count, but are reflected in a separate tally.

The new cases bring the state total to 487, which includes 106 active cases. There were no new hospitalizations or deaths reported Tuesday. Ten Alaskans with the virus have died since the first cases were reported here in March.

As Alaska gradually reopened its economy over the past several weeks, state officials have continued to encourage frequent handwashing, physical distancing, regularly disinfecting frequently touched surfaces and wearing cloth face coverings in public as ways to help curb the spread of the coronavirus.

Dr. Anne Zink, Alaska’s chief medical officer, said in a statement posted on Facebook that the test results announced Tuesday reflect what was happening in the community a week ago, or longer. She encouraged Alaskans to continue taking steps to prevent the spread of COVID-19.

“We flattened the curve once before — we can do it again," Zink said in the statement.

A message on today's high case count from Alaska's Chief Medical Officer Dr. Anne Zink: "We continue on the way up....

Posted by Alaska Health and Social Services on Tuesday, June 2, 2020