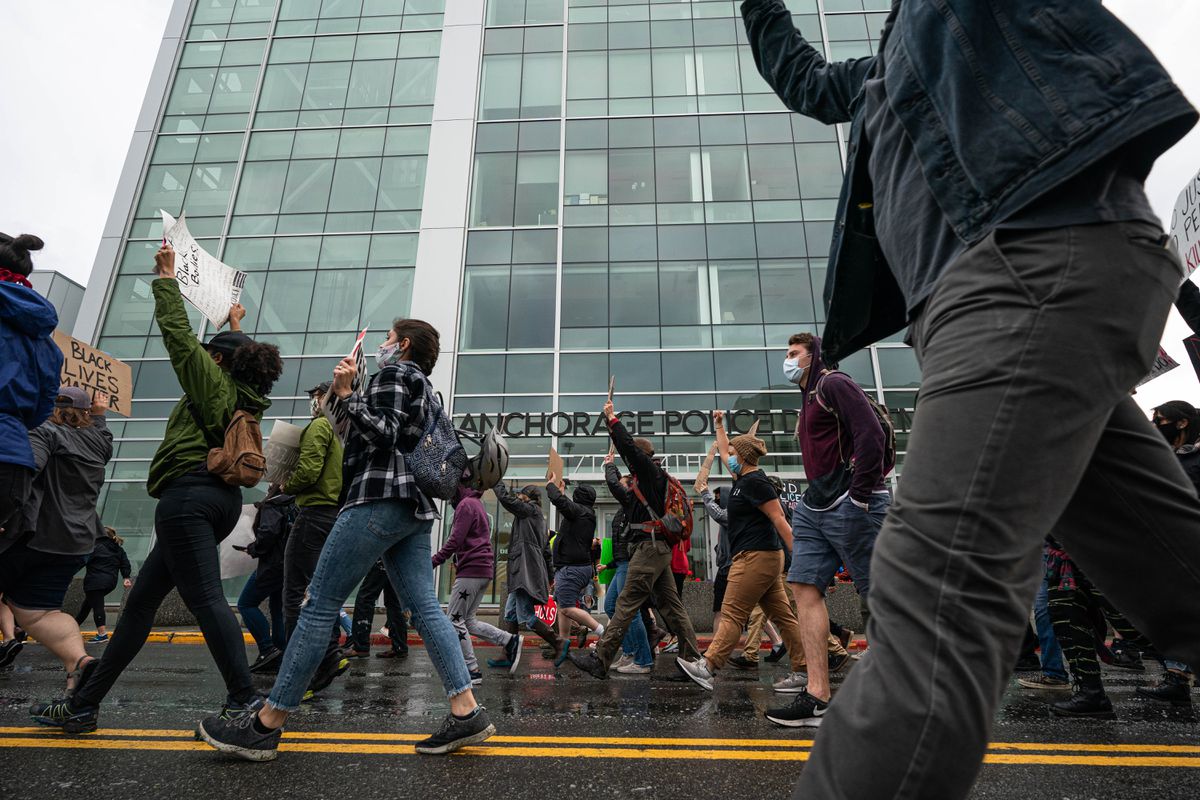 A few lights were on, but the downtown Anchorage Police Department headquarters was quiet on Saturday night as protesters filled the street out front, completely blocking traffic on 4th Avenue for over half an hour as speakers told stories of what they describe as abuse at the hands of the local cops.

Samuel Ohana, who is gender-non-conforming, told a story of a friend’s DUI arrest. His friend, a transgender man, had a breath alcohol test result of 0.01, but that did not satisfy the arresting officers. Amy Kelley, a transgender woman, spoke about a contentious interaction with the police where she feared they would harm her and her friend because the name she now goes by is not the same as what is in state records. “I’m asking that this police department learn how to speak with queers,” she said.

Desmond David-Pitts told the story of his brother, 16-year-old Daelyn Polu, who was shot and killed by Anchorage Police in February during a traffic stop where police say a male passenger shot at officers during the encounter. One policeman was struck during the traffic stop but was protected by his body armor, according to a police statement. David-Pitts questioned the official report.

Zoryna Lealai spoke about a 2017 welfare check that had echoes of the George Floyd incident. Floyd was a 46-year-old black man who was killed by Minneapolis police last month, and his death has sparked nationwide protests. “He put his knee on my neck, and the other two got on top of me,” she said. “I couldn’t breathe.” Lealai said that she was suicidal at the time and when the police knocked on her door she allowed them to come in, but because of her mental state the situation became volatile.

“We’re not asking for pity, nor are we asking for the police to become our social workers or caretakers,” she said, speaking as a person living with a mental illness.

Organizers of the event called for a number of changes to policing in Anchorage, including mandatory intensive mental health training, decriminalization of low-level offenses, disarming police officers, increasing penalties for harassment, making police conduct records available to the public, and cutting the police budget.

Organizers said some elected officials were present for the march, but none spoke during the event.

Correction: A previous version of this story said that Samuel Ohana spoke about his own arrest. In fact, he was talking about a friend’s arrest.