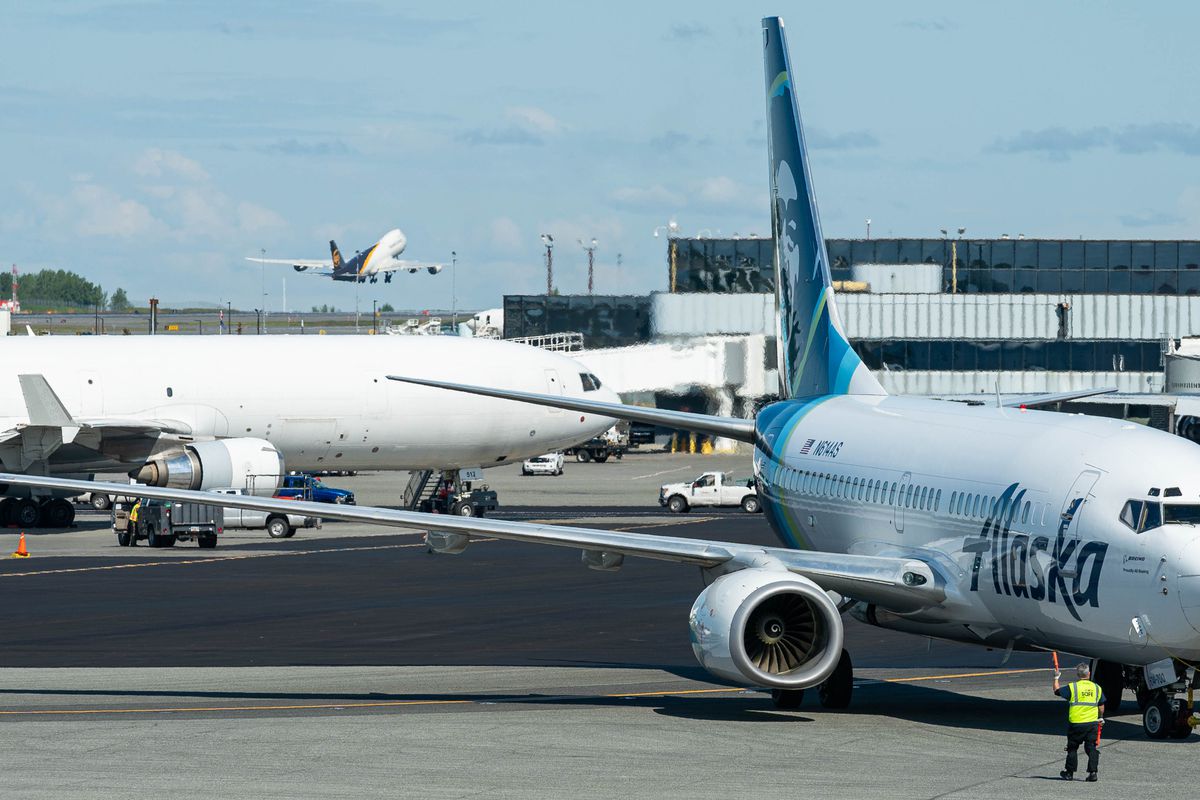 An Alaska Airlines airplane pulls away from the gate at the Ted Stevens Anchorage International Airport as a UPS plane takes off on Friday, June 5, 2020. (Loren Holmes / ADN)

An Alaska Airlines airplane pulls away from the gate at the Ted Stevens Anchorage International Airport as a UPS plane takes off on Friday, June 5, 2020. (Loren Holmes / ADN)

The state of Alaska recently implemented a testing-based policy that provides more flexibility for travelers from out of state who want to avoid a 14-day quarantine upon arrival. Hours before that took effect June 6, Anchorage released its own plan to help prevent travelers from spreading the coronavirus.

Anchorage’s plan lays out restrictions on what indoor spaces travelers can access for the first two weeks after they arrive, unless they pass an additional round of testing.

A city official said Anchorage’s requirements for travelers aren’t intended to be much stricter than the state’s. Rather, she said, the city’s plan is its interpretation of what the state regulations aim to achieve.

“Part of what we did was try to translate the state guidelines into words that we felt individual travelers and residents thinking about traveling ... could understand,” said Anchorage city attorney Kate Vogel.

The city’s policy is a reflection of the state’s, as well as information relayed in state news conferences, on the state’s website and in conversations with state officials. The city tried to centralize and clarify that information in its own version of the policy, Vogel said.

“I think we can all acknowledge this is a complicated plan, and the simpler plan of quarantine for 14 days was easier to understand but provided less flexibility,” Vogel said.

Right now, airlines are informing travelers of the state policy. Vogel said the city feels that the state’s policy is compatible with its own. The city is working on creating its own educational material, but Vogel said she doesn’t know when that effort will be launched.

The state and the city’s policies say basically the same thing about what travelers should do when they land first in Anchorage.

If travelers show negative results from a test taken within 72 hours of their departure time in another state, they will not have to be tested in an Alaska airport. They may need to get a second test seven to 14 days after arriving, according to the state, and may receive a voucher to offset the cost of that test. They’ll need to “minimize interactions” until 14 days have passed since their arrival; until they test negative in the second COVID-19 test; or until they leave Alaska, whichever comes first.

Those who get tested upon arrival at an Alaska airport rather than before travel will have to quarantine until they get their results. They will also need to take a second test at least a week later, and will have to minimize interactions until their second test results come back negative. This includes Alaska residents who have been out of state for five days or fewer.

But compared to the state, the city of Anchorage lays out what it means to minimize interactions in greater detail.

Under Anchorage’s order, people during the first 14 days after their arrival cannot visit indoor entertainment venues, like theaters or museums, or dine in at restaurants. The policies are compatible, Vogel said, but the city created its own definition of “minimize interaction." The city’s definition is in part based on comments from state officials and state educational materials.

On the state’s frequently asked questions page about the travel requirements, it explains “minimized interaction” similarly.

“When you buy food, eat in outdoor settings. Order delivery if possible. Wear a face covering if you go into public areas. Take part in outdoor recreation (such as fishing) instead of visiting a museum. Postpone attending gatherings until after this window is over.”

If someone’s second test comes back negative, they can stop minimizing their interactions with others before the end of that 14-day period.

Vogel said it’s important for travelers to understand the risks before leaving on a trip to Alaska. If they test positive for the virus here, they cannot return home until they are no longer sick. They will have to isolate in Alaska at their own expense.

The state in its health mandate describes the testing to occur as “molecular based” while Anchorage refers to PCR tests. They’re describing the same thing: viral tests intended to determine whether someone is currently infected (these usually involve a nasal swab, or a saliva sample). Antibody or serology tests, which determine whether someone was previously infected, do not meet the city and state requirements.

There are a couple of key differences between the city and state policies, Vogel said.

Under city rules, a traveler must “inform their hotel, rental lodging host, and/or roommates of their quarantine status or whether they are required to minimize in-person interactions” during the 14 days after arriving in Alaska.

Also, under the city’s policy, people in the minimized-interaction stage are required to wear a face covering anytime they are around non-household members.

Vogel said there is no requirement that places like restaurants ask customers if they have traveled. But businesses might want to post the rules near the entrance to remind customers, she said.

“We think empowering businesses to understand their rights in this situation can help with the public information campaign, which we think is the key to enforcement,” Vogel said.

Vogel said the policy essentially relies on the honor system, though a fine or criminal charge could be used if someone is aggressively running afoul of the policy. Having a separate mandate allows the city to impose a civil fine, rather than a criminal charge that can be levied under the state policy, she said.

While the different language in the state and the city’s travel policies could lead some to believe they are markedly different, that’s not the case, Vogel said.

“If someone doesn’t like Anchorage’s plan, they probably don’t like the state’s plan, they just maybe haven’t dug deep enough into it,” Vogel said.