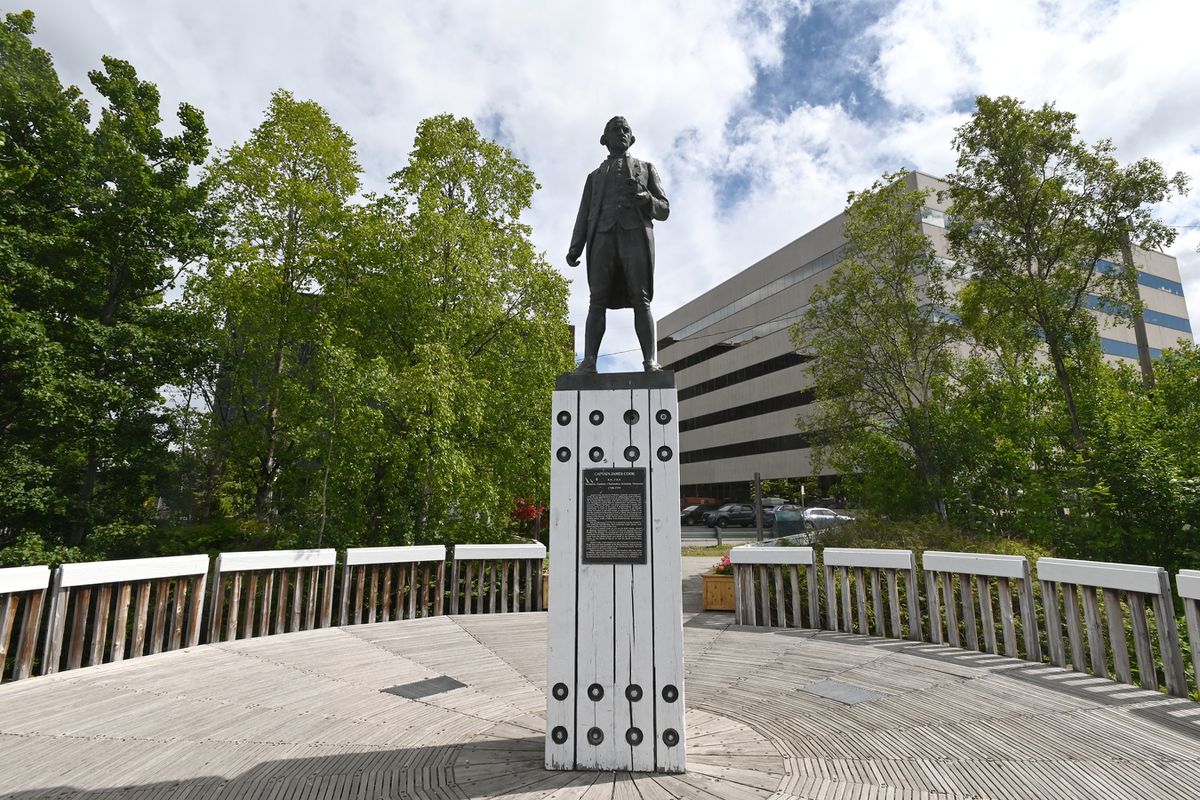 Following calls on social media for the statue of Captain James Cook to be removed from downtown Anchorage, Mayor Ethan Berkowitz has asked the Native Village of Eklutna to decide what to do with the statue.

In a joint letter Tuesday, Berkowitz and tribal president Aaron Leggett said “the statue is but one symbol among many that fail to fully and fairly recognize Anchorage’s First People.”

“Consequently, as part of the government-to-government relationship between the Municipality of Anchorage and the Native Village of Eklutna, we seek to establish a process that respects the crucial role and sovereign authority of local tribes as we more fully and fairly portray Alaska’s past,” the letter said.

The Native Village of Eklutna is the only tribal government within the boundaries of the Municipality of Anchorage. It became federally recognized in 1982.

Leggett said he would prefer to augment the monument at Resolution Park to include an accurate history of Cook’s time in Alaska and the history of the Dena’ina people. But he said it’s a decision for the village’s council to make later this summer.

“I don’t want to be the one saying it will never be taken down, but I think there needs to be a lot more discussion before we move forward,” Leggett said.

Leggett said this is the most significant recognition from an Anchorage official of the village being a sovereign government. That recognition, and the formation of government-to-government relations between the village and Alaska’s largest city, is something he’s been working on for 15 years.

“This is a formal statement on behalf of the mayor that really does honor our sovereignty and looks at us as the true partner and governmental institution in our city,” he said.

Cook, a famed British explorer, was in the Anchorage area for short period in May and June of 1778; he and his crew were the first Europeans to reach Prince William Sound and Cook Inlet. His visit is remembered in the oral tradition of the Dena’ina people.

The statue in downtown Anchorage was given to the city by oil company British Petroleum in 1976. It is a replica of a statue in Whitby, England, which is a sister city of Anchorage.

Calls for the Cook statue’s removal in Anchorage come as statues of historical figures who were involved in colonization or the slave trade are being taken down and vandalized worldwide, viewed in a more critical light during the current global reckoning on racial equality.

[Excerpt: Southcentral Alaskans at first contact with the Cook expedition]

Leggett said the Cook statue could be removed, or the outcome could be as simple as turning it around, so its back faces Cook Inlet. He said he’s humbled that so many have taken interest in the statue.

His personal goal is to use this as a way to educate people. Leggett, a special exhibits curator at the Anchorage Museum, said he sees Cook as a complex person whose maritime achievements are impressive. But Leggett said he also sees Cook as a colonialist.

That education could be changing the plaque on the statue to reflect the history of Indigenous people, as well as adding other educational materials at Resolution Park.

“It creates an opportunity for my people to tell a portion of our story because of Cook’s celebrity; the natural draw,” Leggett said. “Most people in the world know who Captain Cook is.”

Correction: An earlier version of this article said Captain Cook was only in Alaska for a short period in May and June of 1778; Cook was in the Prince William Sound and Cook Inlet area for that period but was in Alaska through October.