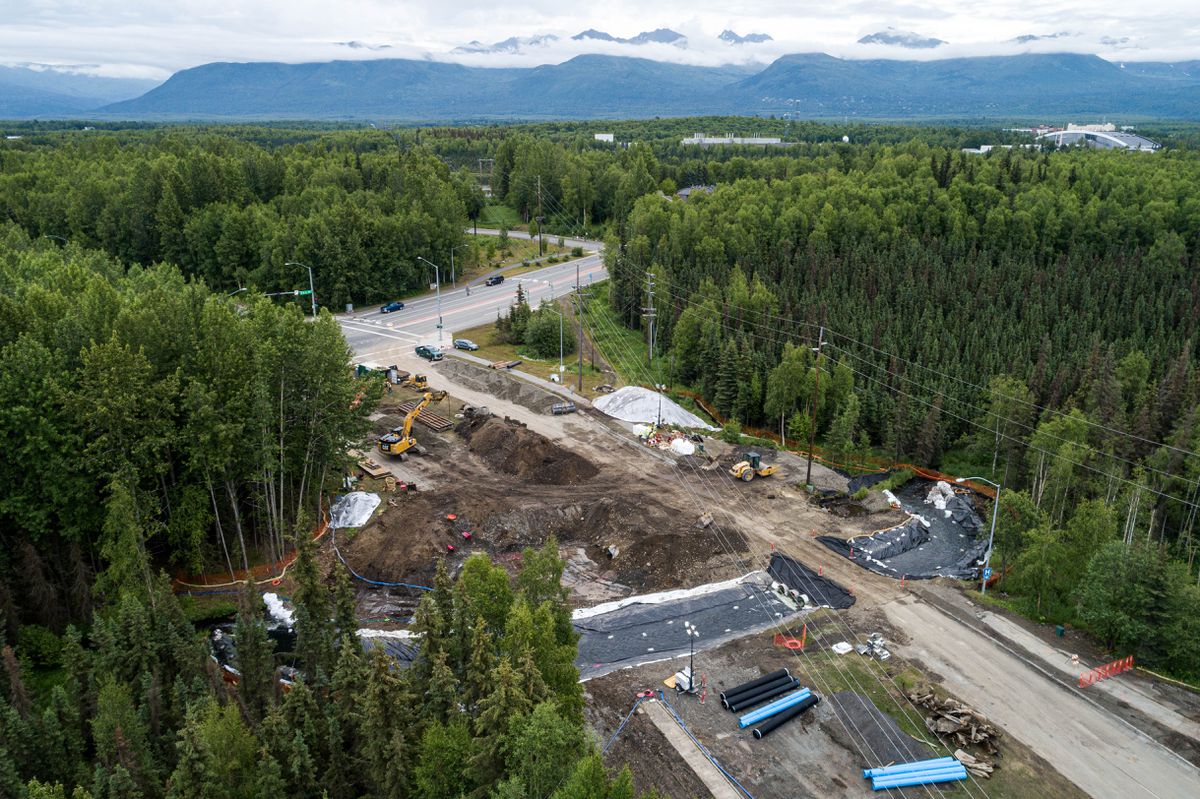 Chester Creek is diverted as it crosses Northern Lights Boulevard on Friday, July 10, 2020. The stream will be diverted for about two weeks while the culvert is replaced, according to Alaska Department of Fish & Game habitat biologist Megan Marie. (Loren Holmes / ADN)

Chester Creek is diverted as it crosses Northern Lights Boulevard on Friday, July 10, 2020. The stream will be diverted for about two weeks while the culvert is replaced, according to Alaska Department of Fish & Game habitat biologist Megan Marie. (Loren Holmes / ADN)

Since early July, construction crews have been working day and night to replace a pair of rusty, failing culverts carrying Chester Creek underneath Northern Lights Boulevard.

On Thursday morning, an excavator operator carefully breached the stream bank, sending the water rushing down a temporary channel so the nearly 40-year-old culverts could be torn out and replaced with a new concrete one.

Chester Creek, called Chanshtnu (Grass Creek) in Dena’ina Athabaskan, is one of Anchorage’s three major urban creeks — and the most developed one. It begins in the Chugach Mountains and bisects the Anchorage Bowl before reaching Knik Arm, draining a watershed that is home to more than 100,000 people.

The creek is home to four native salmon species — coho, chinook, pink and sockeye — and a number of year-round resident species including rainbow trout, sculpin and stickleback.

After the stream was diverted Thursday morning and most of the water drained from the old pipes, three biologists from the Alaska Department of Fish and Game came in with nets to scoop up the handful of fish remaining in muddy puddles lining the old stream bed, placing them in buckets before releasing them into the newly diverted stream.

"During a project like this there are going to be short-term impacts to the stream," said habitat biologist Megan Marie. "But when it's finished there will be long-term benefits."

The metal culverts were installed in 1981 and failed late last year, causing a sinkhole to open up on the road above. The new culvert will be made of concrete, able to accommodate more water, and will have a natural rock bottom.

[Part of Northern Lights Boulevard will be closed for 30 days]

“It will simulate the stream flowing under the road,” said Marie, “so you’ll have improved sediment transport and hydraulic capacity. It’s going to mimic the natural stream processes that help keep this habitat healthy.”

Fish and Game is only one of a number of interested parties working to improve the health of Anchorage’s streams. Another is the Anchorage Waterways Council, a nonprofit that works on water quality issues including improving fish habitat.

“Whenever there is a need to replace a culvert, we want to make it fish friendly,” said Cherie Northon, the council’s executive director. “There’s no money to replace culverts just to improve fish passage, but if you have to replace this culvert because the road is collapsing, then we can take that opportunity to make the culverts work for the fish.”

“Anchorage is fairly unique in that we have spawning salmon in our urban area,” said Northon, adding that projects like this will improve access to spawning habitat for the resident fish.

Marie notes that with projects like this, sometimes the number of fish rescued can be in the thousands. On Thursday her team relocated everything from sticklebacks barely larger than a pencil eraser to a few large rainbow trout, including one that was 10 inches long.

“We have anadromous fish streams that go halfway up the hillside,” said Marie. “We’re really lucky.”

For Marie and the other biologists, crawling through a mud-filled culvert reminds them why it’s important to work together with contractors, engineers and others through a permitting process to protect Alaska’s aquatic resources. “It’s nice to get out, it reminds you of the importance of what you’re doing when you’re sitting at your desk working on permits.”

Plus, it feels good.

And in a few weeks, when the new culvert is finished and the stream is ready to be diverted again, Marie and her colleagues will be back to do it all again.