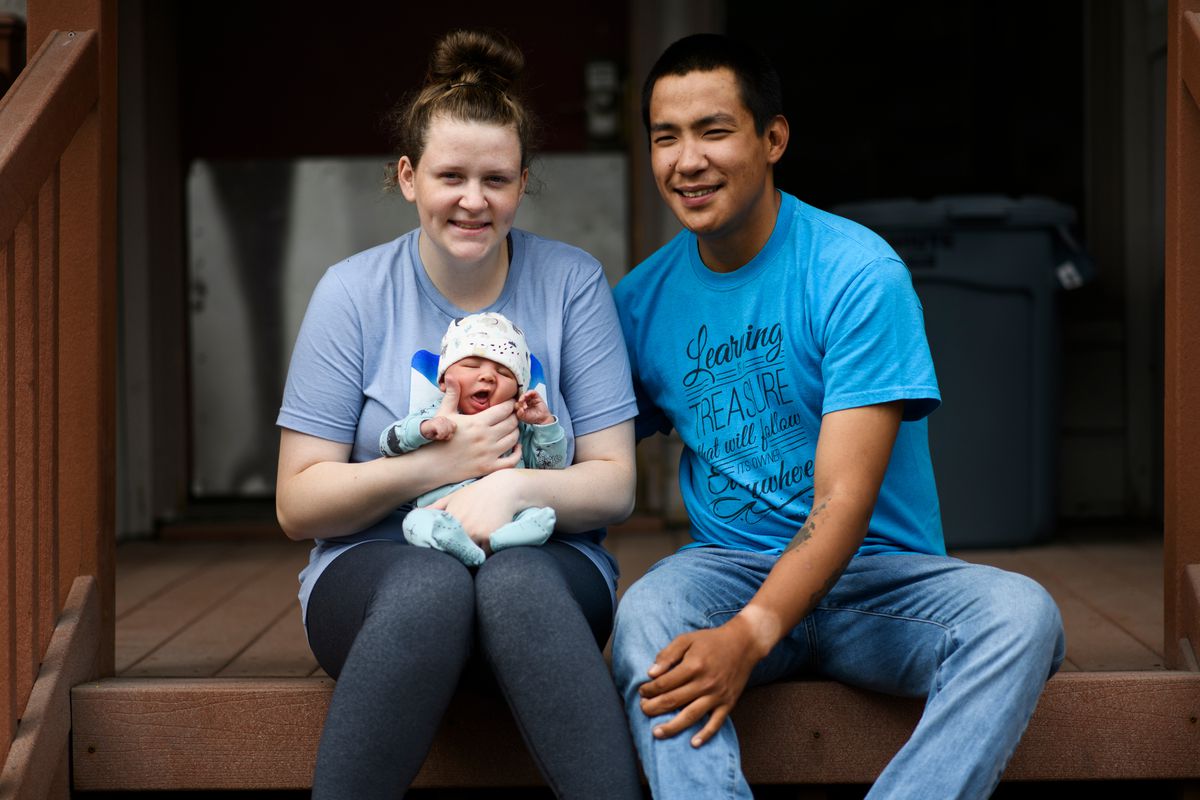 Keegan Cranston-Stuckey, 22, aged out of Covenant House, which provides shelter for homeless youths. She now lives in an apartment with her newborn son, Anikan, and partner, Lorenzo Kanrilak, 22. Photographed on August 3, 2020. (Marc Lester / ADN)

Keegan Cranston-Stuckey, 22, aged out of Covenant House, which provides shelter for homeless youths. She now lives in an apartment with her newborn son, Anikan, and partner, Lorenzo Kanrilak, 22. Photographed on August 3, 2020. (Marc Lester / ADN)

Keegan Cranston-Stuckey used to wander Anchorage’s streets at night, trying to keep herself awake and alive. Every day was a struggle to stay safe and fed, especially when she found herself pregnant.

The 22-year-old, who gave birth last month to a healthy son, ended up without shelter after she aged out of Covenant House Alaska, which serves homeless youths 13 and older and young adults. Although Cranston-Stuckey often felt sick because of her pregnancy, she remained on the street until relentless nagging from Sean Gaither finally persuaded her to apply for housing.

Gaither, a Covenant House staff member, had stayed in touch with the young mom even after she left the shelter.

“Sean kept bugging me. Finally, I decided to take the help and started to fill out paperwork,” Cranston-Stuckey said.

Gaither is what Covenant House Alaska calls a “permanency navigator.” He helps homeless youths move toward independent living. In March, he helped Cranston-Stuckey and her partner Lorenzo Kanrilak, 22, move into their own place in Midtown.

Their apartment is partially funded through a “rapid rehousing” grant from the U.S. Department of Housing and Urban Development. The grant pays a portion of rent and utilities. Income that Kanrilak earns from his job at the Anchorage Downtown Partnership covers the rest.

A permanency navigator’s job can run the gamut. Gaither gets clients like Cranston-Stuckey to doctor appointments and job interviews. He steers them to mental health counseling and substance treatment if they need or want those services.

He spends a lot of time helping youths get identification cards, often lost or stolen during chaotic lives. The task may seem mundane, but it’s crucial to getting a life on track. An ID card is essential for things like applying for housing and benefits, finding employment, enrolling in classes or getting on an airplane to fly home.

Youths who come to Anchorage from Alaska’s rural communities for medical visits or other reasons often become homeless after they lose their ID and wear out their welcome at the homes of relatives and friends.

Gaither is adept at cutting red tape, tracking down birth certificates and Social Security cards and waiting in line at the Division of Motor Vehicles to get state ID cards. Sometimes it takes a lot of patience.

“I got to the breaking point at the DMV recently,” he said.

The clerk wanted the youth’s birth certificate to issue an ID but Gaither didn’t have it. The Bureau of Vital Statistics wouldn’t provide the document without the kid’s ID.

“I said, ‘Do you want this kid to have to commit a crime so he goes to jail, where they will figure out his identification?’ I was shouting,” Gaither said.

Eventually, the ID was issued but not without major haggling.

Being a permanency navigator means doing whatever it takes, for however long, for a client to become successful, said Gaither. In Cranston-Stuckey’s case, it meant having someone from Covenant House accompany her to the hospital when her son, Anikan, was born.

That someone was Amanda Valenzuela. A former addiction counselor, Valenzuela’s job is to help pregnant girls or young mothers staying at Passage House, a program run by Covenant House Alaska.

Valenzuela got a call on July 24 that Cranston-Stuckey, nine months pregnant, needed to see a doctor because she was having problems with her hands and feet. The expectant mother asked Valenzuela to drive her to the hospital and wait while she was seen. After admission, doctors detected a complication with Cranston-Stuckey’s liver and decided the baby needed to be delivered right away, said Valenzuela.

Because of COVID-19 restrictions, Valenzuela was given permission to leave the hospital once to grab clothing and other items. Back at the hospital, she needed to stay for the duration.

“I was scared to do it without my mom. I was just happy that Amanda was there to help me,” Cranston-Stuckey said.

“As her contractions grew stronger, I tried to comfort her and guide her to breathe,” Valenzuela recalled. “Multiple times she looked at me with eyes as big as saucers telling me she couldn’t do it. I reassured her that she could and gave her my hand to squeeze and sat by her side.”

As the baby arrived, Valenzuela pulled out her phone and FaceTimed with Kanrilak.

“He cried on the call watching his son being brought into the world,” said Valenzuela. “I was blessed with the honor of cutting the cord.”

They remained at the hospital for two more days so medical staff could ensure that mother and baby were healthy and strong enough to go home. During that time, Valenzuela helped with diaper changes, photography, making video calls to friends, allowing Cranston-Stuckey to sleep and helping her with breastfeeding.

Cranston-Stuckey isn’t making plans for the future quite yet. She’s getting used to having a baby and recuperating.

“I’m just ready for my body not to be sore,” she said.

Alison Kear, Covenant House Alaska’s executive director, said permanency navigators serve as role models and provide consistency. Many people on her staff, including Valenzuela, have come through Covenant House’s doors themselves as youths and want to give back.

Kear expects her caseload to sharply rise as the COVID-19 pandemic continues. Gaither, for example, already has around 50 youths on his docket.

With evictions, job losses, food insecurity, cuts in unemployment benefits and schools closed for in-person learning, the months ahead will likely bring a new wave of homeless youths to the shelter.

In a recent panel discussion with U.S. Sen. Lisa Murkowski, Kear said she has seen a 300% rise in homeless kids showing up at Covenant House Alaska. Schools provide food, social interaction and a sense of routine and stability. When they’re closed for any length of time, the number of homeless youths expands.

“Many of these kids were staying in homes of their friends and schoolmates. But during hunker down, this safety net didn’t exist,” she said.

Homeless youths face predation and violence on the streets of Anchorage in regular times, but when you lay COVID-19 atop that scenario, the situation becomes inherently more dangerous, Murkowski said.

“I fear that what we’re seeing now is just a forerunner to what we’re going to be seeing later. We’re going to see a new wave of family and youth homelessness,” the senator said.

“In places like Alaska where we have a very seasonal economy, we are going to have people living on the edge or pushed into homelessness because the jobs they once had whether in the tourism sector or perhaps in the fisheries or perhaps construction, which again is only seasonal, they’re not going to make it through the winter. We’re going to have a lot of very vulnerable people who are on the streets in the wintertime. In Alaska, this is not a good place to be.”

Murkowski is co-sponsoring a bipartisan bill called the Emergency Family Stabilization Act to help provide relief. She introduced the legislation in early June along with Democrats Joe Manchin of West Virginia and Kyrsten Sinema of Arizona.

If passed by Congress, the bill would provide $800 million in new emergency relief to children, youths and families experiencing homelessness because of the pandemic’s economic shockwaves.

According to HUD statistics, 161 Alaska households were homeless in 2019. Among public school students, an estimated 3,769 experienced homelessness sometime during the year. Of those, 351 were unsheltered, 678 were sheltered, 222 were living in hotels or motels and 2,518 doubled up with others.