As Anchorage hockey supporters protest use of ice arena for homeless shelter, city looks for alternatives 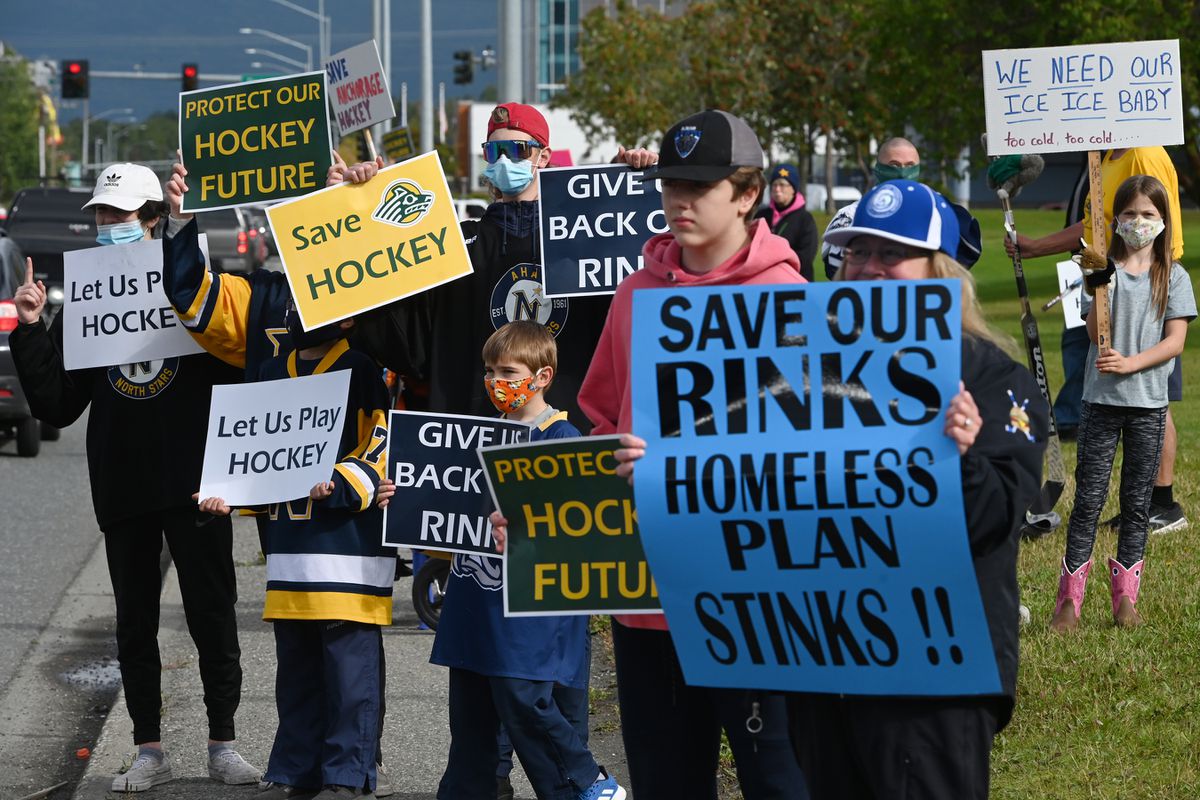 People from the hockey and figure skating communities protest outside the Loussac Library during an Anchorage Assembly meeting on Wednesday, August 26, 2020. (Bill Roth / ADN)

People from the hockey and figure skating communities protest outside the Loussac Library during an Anchorage Assembly meeting on Wednesday, August 26, 2020. (Bill Roth / ADN)

A large group of protesters, including many children and young adults in hockey jerseys, gathered outside the Loussac Library late Wednesday afternoon to oppose the city’s potential use of the Ben Boeke Ice Arena as a homeless shelter.

Holding signs reading “Don’t Puc with Hockey,” “Show Anchorage You Give a Puc” and “Hockey Lives Matter,” protesters chanted “Open Up! Open Up!,” their voices echoing inside the library as the Anchorage Assembly met.

The protest was organized by the Anchorage Hockey Association.

“There’s got to be other places where you can put the homeless. There are not many places you can have ice,” said Kirk Kullberg, the association’s mite director.

It appears the city is listening. Anchorage’s Economic and Community Development Director Chris Schutte said Wednesday evening the arena will only be used as a last resort and the city is looking at alternative locations to house as many as 400 homeless residents.

The city is “supercharging” its efforts to find housing units, rooms and any place with four walls and a sprinkler system, rather than remobilizing another congregate shelter, Schutte said.

“All options are on the table,” said Schutte, adding he hopes to have an announcement about the ice rink by early September.

Caption
People from the hockey and figure skating communities protest outside the Loussac Library during an Anchorage Assembly meeting on Wednesday, August 26, 2020. (Bill Roth / ADN)
Wait 1 second to continue.

The city was preparing for ice installation at the Ben Boeke arena last week but reversed course after officials took a number of factors into account, Schutte said. With winter approaching and a shortage of beds for homeless residents, the city decided it needed to keep Ben Boeke as a possible shelter for the time being while a team of public health, emergency operations and real estate officials try to secure alternative housing.

Sullivan Arena, adjacent to Ben Boeke, has reached or exceeded capacity in recent nights and has a waiting list of people wanting to stay there, Schutte said. The city opened Sullivan Arena as a mass shelter in late March to provide 6 feet of spacing between cots, decompressing the crowded Brother Francis Shelter and Bean’s Cafe on East Third Avenue.

Anchorage has an estimated 1,100 people who officially lack housing and stay at shelters, in camps and other temporary places. Many thousands more are semi-homeless, and occasionally seek help from shelters or social service agencies. The city expects many more people will become homeless in the weeks and months ahead because of job losses and other economic disruption caused by the coronavirus pandemic.

The city administration and a majority on the Assembly are still hoping to purchase three buildings to provide day engagement, overnight shelter and transitional housing using money from the federal CARES Act. But those transactions are still under discussion and the buildings won’t be ready for occupancy in the near-term, said Jason Bockenstedt, the mayor’s chief of staff. Meanwhile, the city needs to move quickly to find places for up to 400 people and a rapid rehousing approach is what officials are focused on in the days ahead, he said.