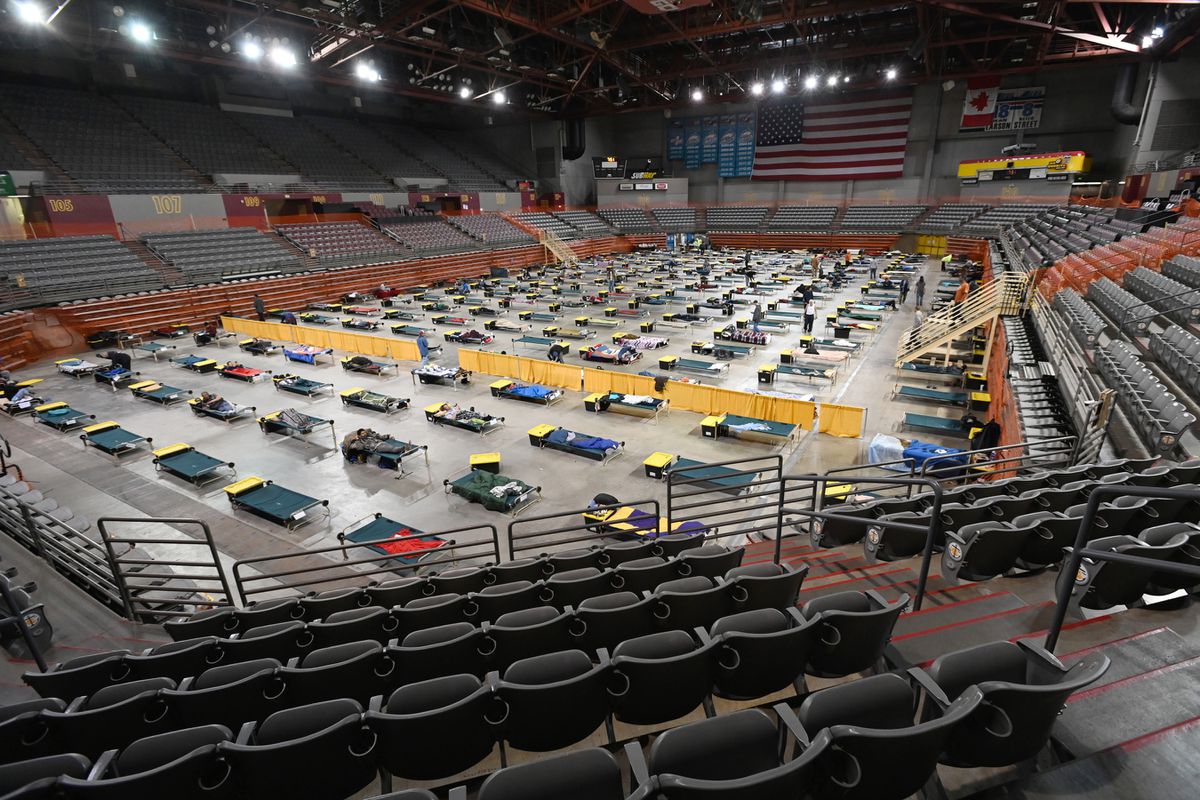 Homeless clients settle in for the night at the Bean's Cafe emergency shelter in the Sullivan Arena on Monday evening, April 27, 2020, during the COVID-19 pandemic. (Bill Roth / ADN)

Homeless clients settle in for the night at the Bean's Cafe emergency shelter in the Sullivan Arena on Monday evening, April 27, 2020, during the COVID-19 pandemic. (Bill Roth / ADN)

Sullivan Arena will likely operate as a mass shelter for Anchorage’s homeless people into at least 2021 unless alternatives emerge, the mayor’s chief of staff said Wednesday.

It’s also possible the Ben Boeke Ice Arena next door will reopen as a mass shelter to accommodate homeless residents during the ongoing coronavirus pandemic.

At an Anchorage Assembly Committee on Homelessness meeting Wednesday, Jason Bockenstedt said the city has a gap of 398 shelter beds because of pandemic spacing requirements. The federal Centers for Disease Control and Prevention recommends at least 6 feet between beds or mats. Because of that, Anchorage decompressed crowded shelters at Brother Francis and Bean’s Cafe on East Third Avenue and opened the arenas to provide needed space.

Since March 21, Sullivan Arena has temporarily filled the shelter-bed gap.

It has been operating near or at capacity in August, with an average of 339 people staying there every day. Ben Boeke also served as a mass shelter for women, couples and LGBTQ residents in need of housing from late March to early June, and it soon may be needed again.

With fall approaching, the city is trying to find more permanent housing arrangements for homeless residents, including the proposed purchase of three buildings for homeless services and transitional housing.

Those purchases, approved by the Anchorage Assembly on Aug. 11 after five days of heated public testimony, are on hold as the city responds to questions about the spending raised by the Treasury Department inspector general’s office. In response to citizen complaints, the office recently suggested that Anchorage’s use of $12.5 million in CARES Act money to buy the properties may be outside the fund’s intended scope.

If the building purchases get held up, the city may have no choice but to continue using the Sullivan and Ben Boeke arenas to shelter the homeless, Bockenstedt told the committee.

Bean’s Cafe has a contract to operate Sullivan Arena for up to 350 clients at a monthly cost of $673,709, according to his presentation. The total costs, including medical care, towels, porta potties, security, fencing, trash removal, utilities and building maintenance, internet, phone and television, run over $885,000 a month. About 75% of the cost is reimbursable by the Federal Emergency Management Agency, at least for the next two months.

“At some point in the future, I think we all understand, that is going to go away and that is certainly going to be a challenge as we have discussed in previous settings,” Bockenstedt said.

As long as a national emergency is declared, the shelter costs should be FEMA-reimbursed but after the emergency ends, the city will have to justify the expense on a monthly basis, he added.

Meanwhile, four people have tested positive for COVID-19 at Sullivan Arena: a staff member and three clients who were all asymptomatic, said Cathleen McLaughlin, shelter operations director for Bean’s Cafe. They received tests as part of a group of 115 people on July 31. The staff person isolated at home and the three shelter clients were taken to a hotel for isolation. Contact tracing resulted in 37 people being quarantined and tested. All tests came back negative, she said.

Another round of testing took place at the Sullivan on Aug. 11 involving 180 people. All test results were negative. On Tuesday, another group of 163 people got tested and those results are expected Friday.