As the nights get cooler and Anchorage’s mass shelter exceeds capacity, homeless people are turned away 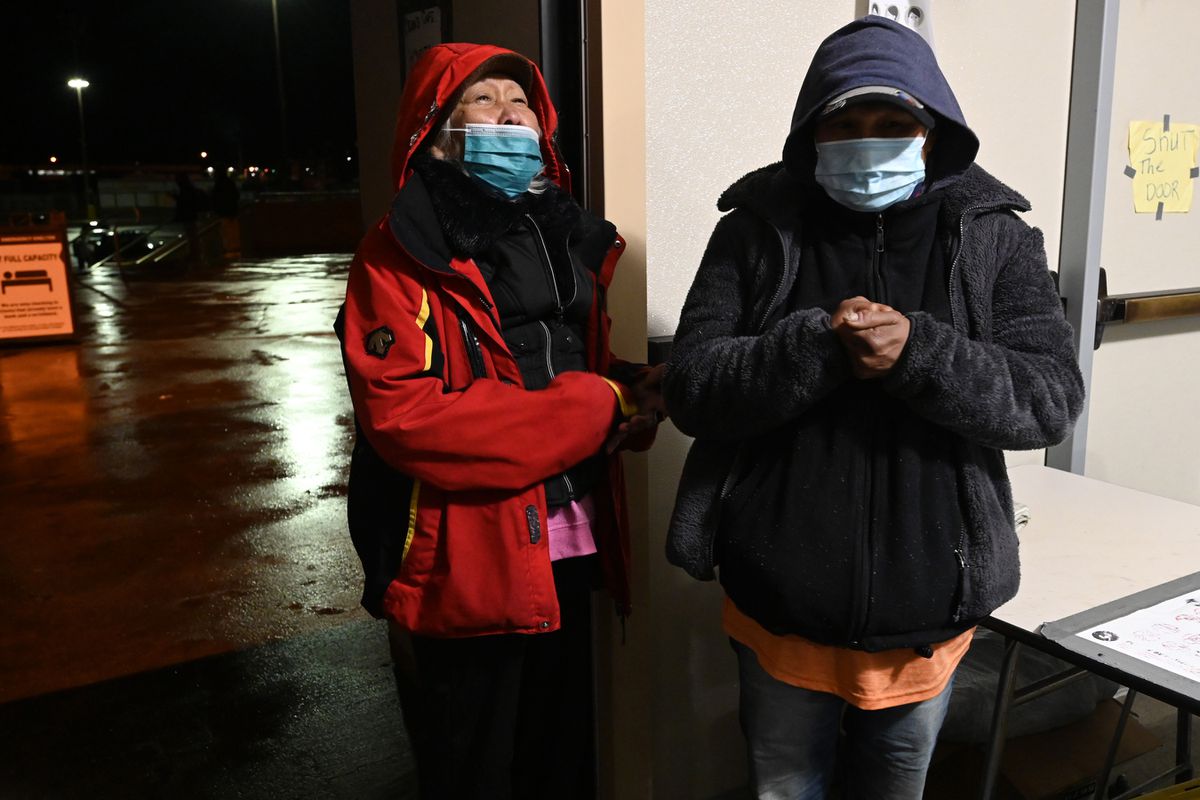 With tears in her eyes Tina Morgan, left, said "I don't know where to go. I'm going to freeze," after she and Ella Luther were turned away from the homeless shelter at Sullivan Arena when it reached full capacity on a rainy Wednesday evening, Oct. 14, 2020. (Bill Roth / ADN)

With tears in her eyes Tina Morgan, left, said "I don't know where to go. I'm going to freeze," after she and Ella Luther were turned away from the homeless shelter at Sullivan Arena when it reached full capacity on a rainy Wednesday evening, Oct. 14, 2020. (Bill Roth / ADN)

It was 10:30 p.m. Wednesday and Tina Morgan needed a place to sleep. Under a cold, steady rain, Morgan and her friend, Ella Luther, pleaded with a security guard at the entrance to Anchorage’s city-owned Sullivan Arena.

“We’re going to freeze,” said Morgan, who is originally from Selawik, a Northwest Alaska village. “I’m going to have to sleep outside. It’s not fair. I need a place to sleep.”

Roberto Santiago could not let them in. They had missed the 9 p.m. curfew for entering the mass shelter and even if they had made it, it was unlikely they would have gotten a cot or a mat.

“I have no idea where to send them,” Santiago told a reporter.

“Call CSP,” said Morgan, referring to Community Service Patrol, hoping to be taken to Anchorage’s sleep-off center. She meant ASP, or Anchorage Safety Patrol, which responds to calls about individuals who are incapacitated in public places due to alcohol or drugs, said Santiago.

“But you’re not drunk, or drunk enough,” he said.

Santiago filled Luther’s water bottle and sent the women on their way. They sat outside the arena-turned-shelter on a bench until late in the evening.

As nighttime temperatures fall, Anchorage’s largest homeless shelter is trying to squeeze as many people in as possible while juggling a wait list and placing others in hotel rooms.

The Sullivan Arena shelter is supposed to hold no more than 376 people. But for the last several nights, nearly 400 people have slept at the sports and entertainment complex, some on mats on the floor.

Edna Mae Ephamka, 47, of Bethel was among them on Wednesday night.

Ephamka was on the waiting list. Curled on a sleeping bag and pink blanket on the mezzanine level reserved for women, couples and LGBTQ individuals, Ephamka removed her boots and examined her feet. Her big toes curled sideways in an unnatural position. The skin on the soles of her feet was fluffy and white, a combination of severe athlete’s foot and arthritis.

Katelyn Sheehan, Bean’s Cafe navigation director, sat on the floor next to Ephamka.

“Are you on disability? If not, we could help get you signed up. I’m pretty sure you could qualify because of your feet,” Sheehan said.

“Tomorrow morning, let’s have you go to the clinic and then the navigation hub,” Sheehan said.

The Sullivan shelter hosts a resource center and clinic where clients can connect with medical care, housing, alcohol and substance misuse treatment, job information and help with getting identification cards, among other things.

Word is spreading among Anchorage’s homeless individuals about the services offered at the Sullivan and more people are coming, Sheehan said. The arena is becoming a magnet, which is good, but there’s just not enough space.

“There are more people than beds,” she said.

Because people are everywhere, “we’re having trouble maintaining the 6 feet of spacing” recommended by the Centers for Disease Control and Prevention, Sheehan said.

Bean’s Cafe recently placed 31 people in hotel rooms to reduce crowding at Sullivan Arena. But people keep showing up. The waiting list opens at 7 a.m. By 10 a.m., the list of people needing shelter typically ranges between 35 and 50 people.

If individuals show up and the shelter is full, staff will refer them to Sullivan Arena, provided space is available, Aquino said.

Brother Francis used to be the city’s largest shelter, but after the coronavirus pandemic hit, it sharply reduced its capacity and now only accepts elderly, the medically fragile or people using canes, wheelchairs and walkers.

Homeless service providers like Bean’s Cafe and Catholic Social Services are nervous about what winter, during a pandemic, will hold. As economic fallout from the pandemic continues, the ranks of homeless individuals are expected to grow. By some national estimates, homelessness across the country could increase by up to 45% in the coming months.

“I wonder if that is what we’re starting to see. These numbers at this time of year are very high, and I think it reflects the emergency we are in,” Aquino said.

“I wonder how many of these are newly homeless,” she said.

According to Sheehan, a good number are people who recently lost employment.

“Today I had a woman veteran who had her job out on the Slope canceled who is living in her vehicle. She just presented for the first time and we didn’t have a place for her,” Sheehan said.

Another person waiting for a cot at the Sullivan recently lost his construction company after he suffered a stroke. He’s living out of his truck in the parking lot, she said.

Bean’s Cafe staff are seeing more people than ever before discharged from the hospital directly to the shelter. A homeless man recently arrived with a catheter still in place. He had suffered a traumatic brain injury after being attacked, Sheehan said.

Although the arena has medics on hand 24/7 and a daytime clinic, some shelter employees feel overwhelmed by the enormity of medical and mental health issues the clients are experiencing.

“You can imagine how hard this is on your staff,” said Lisa Sauder, executive director of Bean’s Cafe.

Getting people from the shelter and into hotel rooms is helping to ease some of the strain at the Sullivan, but it’s not an ideal solution for everyone. Some people feel isolated in a hotel room and have difficulty coping, especially if they have co-occurring conditions, including mental health and substance misuse disorders.

The manager of a hotel close to Sullivan Arena said that of the 10 homeless guests he has housed since the beginning of October, three had to go. They had brought in overnight guests, drank large amounts of alcohol and disturbed other guests.

As Anchorage’s long winter draws near, some homeless advocates say the Sullivan Arena parking lot should be turned into a tent city or lot for tiny homes. The homeless would be close to food, medical care and other resources available inside the arena.

“It would be great to get these people out of the woods,” said Sid McCausland, a member of the Anchorage Houseless Resources Advocacy Council.

Others want the Ben Boeke Ice Arena, next to Sullivan Arena, reopened as an emergency shelter. An online petition calling for that has garnered more than 14,000 signatures.

Anchorage’s hockey community has vocally opposed reopening the Ben Boeke arena to homeless residents. After serving as a mass shelter early in the pandemic, the arena returned to ice in early September. The move followed public protests spurred by city officials saying they might need to keep the arena as a shelter option for the remainder of the year.

The city has no plans to reopen Ben Boeke as a homeless shelter. It plans to decompress Sullivan Arena by opening at least 30 more hotel rooms for homeless residents, and move as many people as possible into transitional, supportive and rapid rehousing units.

“We anticipate being able to meet demand through those efforts, with the caveat that there are still unknowns about how many people will experience homelessness this winter compared to previous winters,” said Ira Slomski-Pritz, special assistant to outgoing Mayor Ethan Berkowitz.

At least 60 people staying at Sullivan Arena are eligible for supportive housing through a program called Home for Good, said Slomski-Pritz. Home for Good places some of the most vulnerable, hardest-to-house individuals into apartments using an outcome-based payment model.

By early next year, the city plans to convert three buildings in Midtown and Spenard for a mix of overnight shelter, transitional housing and daytime service.

Whether those steps are enough to meet the needs of Anchorage’s homeless population remains to be seen.

It’s ironic that while Alaska Native elders, disabled people and other vulnerable residents are being turned away from the Sullivan late at night, a large building that could house them sits empty nearby, said Sheehan, glancing toward Ben Boeke.

As she spoke, Morgan and Luther huddled together outside the arena’s doors in the rain, searching for a plan for where they would spend the night.