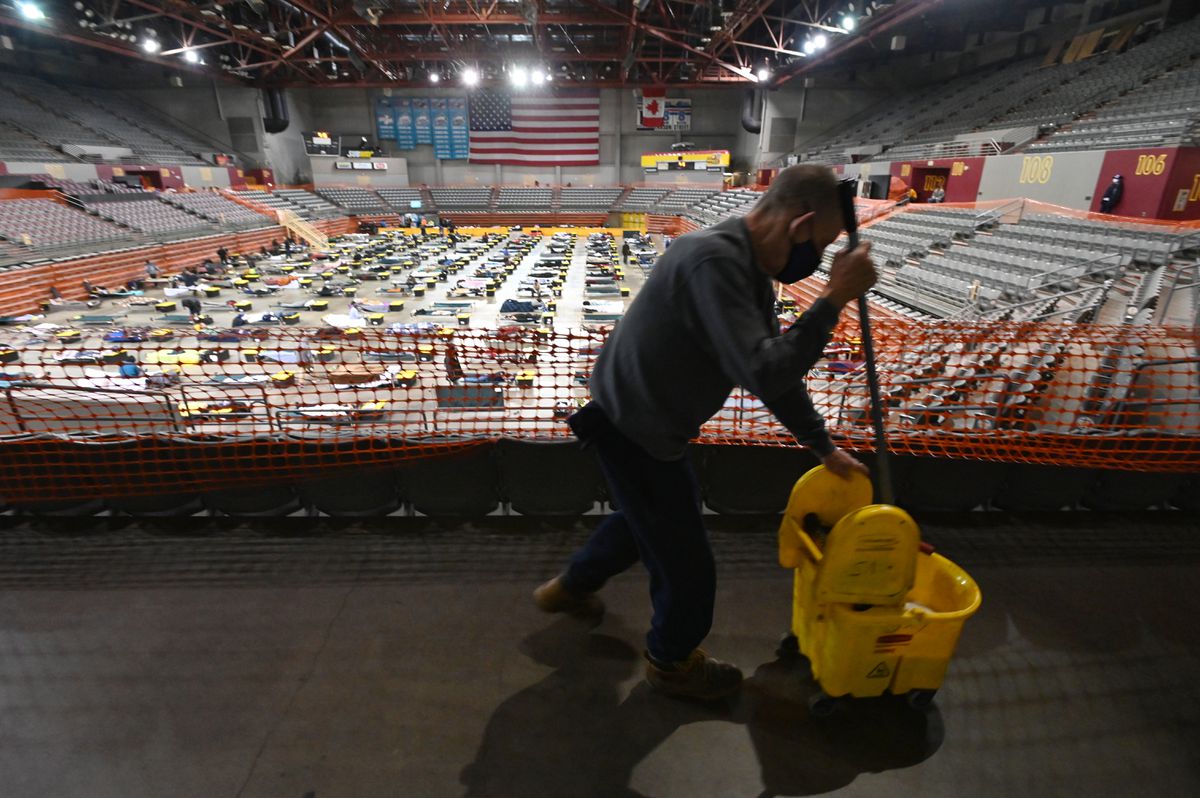 Officials with the federal Centers for Disease Control and Prevention issued a series of recommendations this week on how Anchorage could improve its response to the spread of the coronavirus among the city’s homeless population.

The recommendations — which range from splitting up quarantine and isolation facilities to increasing coordination among agencies — come as winter approaches, increasing the demand on Anchorage shelters and complicating efforts to maintain physical distancing and other public-health protocols.

As of Thursday, epidemiologists have identified 313 COVID-19 cases among Anchorage’s homeless residents. Nineteen of those cases occurred in the past 10 days and are still considered infectious, said Dr. Janet Johnston, municipal epidemiologist, on Friday. Of the total cases, 20 people have been hospitalized and three have died.

[As the nights get cooler and Anchorage’s mass shelter exceeds capacity, homeless people are turned away]

The CDC’s recommendations were developed by a federal field team sent after city officials, in early September, asked the CDC to come to Anchorage to help fine-tune the response to a growing outbreak at homeless shelters. The federal team arrived within a week, and included two epidemiologists and a medical toxicologist from the CDC plus a technical expert in disaster assistance from the U.S. Department of Housing and Urban Development.

Cases among Anchorage’s homeless residents peaked in mid-August with 88 persons being confirmed during the week of Aug. 23. The cases have declined over the past four weeks, according to the CDC report.

The CDC recommended that a multi-agency task force be set up to coordinate the COVID-19 response for the homeless. On Friday, Anchorage Health Department director Heather Harris said the task force has been set up. It consists of local, state and federal subject matter experts and is meeting weekly.

The CDC said the city’s existing isolation and quarantine building — a downtown hotel — should be separated into two locations to lower the risk of transmission from known cases to people with pending test results.

The CDC also recommends that people with the highest risk of severe disease from COVID-19 be prioritized and moved out of shelters into alternative housing.

During its time in Anchorage, the federal team interviewed people staying at the downtown hotel to learn about their experiences with isolation and quarantine. Officials with Anchorage Emergency Operations Center and medical staff had “described difficulty in convincing 213 people to stay on site for the duration of their isolation or quarantine,” the 22-page report said.

The federal team estimated that 397 people experiencing homelessness were either currently staying at a hotel or had completed their isolation or quarantine during the previous two months and were back at shelters.

Of those surveyed, some acknowledged having left their rooms to get food or fresh air, to smoke or to seek medical attention. Seventeen percent of people surveyed said they had experienced withdrawal symptoms while staying at the hotel.

To improve compliance with quarantine or isolation rules, the CDC recommends that the city designate an onsite manager and a 24-hour contact line for homeless support. Another recommendation is to boost coordination among the Anchorage Health Department, the state Division of Behavioral Health and the Anchorage Coalition to End Homelessness.

Other steps that could also be taken: providing more food options, snacks and drinks between meals to reduce the likelihood that clients will go to the nearby soup kitchen for additional food; creating a place for people who test positive for COVID-19 to spend time outdoors separate from smokers; providing access to nicotine or nicotine-replacement therapies; and making substance use treatment or counseling available to those who would benefit.

Harris said the recommendation regarding additional food and beverages has already been implemented. The task force is also discussing how to make more behavioral health services available, Harris said, and the city is working to make alternative housing available for homeless residents who are at high risk of getting sick with COVID-19.

A plan for how to split up the isolation and quarantine facility while providing case management and other support is still under development, Harris said.

The Anchorage Health Department and local homeless service providers have been “tirelessly working” to improve COVID-19 prevention and response among the homeless, said Christy Lawton, the department’s public health manager.

“The CDC and HUD assistance has provided us more ways to enhance those existing efforts,” Lawton said.