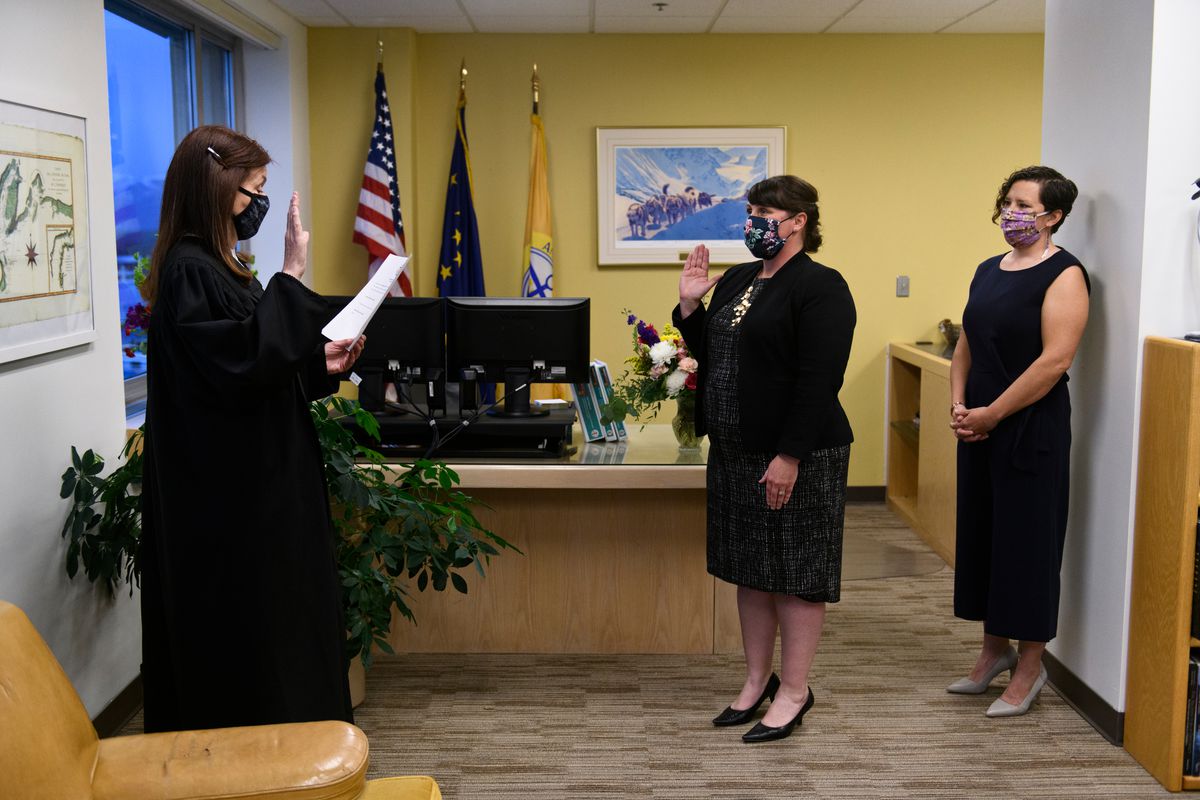 Austin Quinn-Davidson is sworn in as acting mayor at City Hall on October 23, 2020. (Marc Lester / ADN)

Austin Quinn-Davidson is sworn in as acting mayor at City Hall on October 23, 2020. (Marc Lester / ADN)

Her right hand was raised toward Deborah Smith, the chief judge magistrate for the U.S. District Court in Alaska. Quinn-Davidson promised to faithfully perform the duties of the eighth floor office where she stood, her spouse by her side. Windows to the north and west overlooked mostly empty downtown streets.

“These are times that call for stability and measured leadership,” Quinn-Davidson said in brief remarks. “That is what I intend to provide.”

Quinn-Davidson, who has served on the Anchorage Assembly since August 2018, was chosen by a vote of her colleagues one week prior to being sworn in. Ethan Berkowitz announced he would resign as mayor because of what he called “unacceptable personal conduct that has compromised my ability to perform my duties.” Berkowitz disclosed a “messaging relationship” with an Anchorage reporter days after the reporter made unsubstantiated accusations against him on Facebook and left him a vulgar and threatening voicemail.

Quinn-Davidson said she didn’t immediately consider herself to replace Berkowitz when he announced his intentions. Like much of the United States, Anchorage is struggling through an economic storm and public health emergency as COVID-19 cases surge. Being mayor, even for just a few months, would be more than a stopgap formality.

“Feeling the weight of a job this important, especially right now, where decisions you make are literally life and death for some people, (made it) really hard to decide if I wanted to do that,” Quinn-Davidson said.

She also thought then-Assembly Chairman Felix Rivera would step into the mayorship, as the city charter instructs. But Rivera called a meeting to reorganize the Assembly, allowing all 11 members to vote on who should become acting mayor.

Quinn-Davidson said her friends, West Anchorage constituents and Rivera convinced her she had communication skills and a demeanor that would benefit the city now. “People started calling me and saying, ‘I think it should be you,’” she said.

She said she knew she had support from several Assembly members before the vote. After Rivera nominated her, she voted for herself to hold the office until the next mayoral election.

“I haven’t felt overwhelmed since I said I would do it,” she said.

[As acting Anchorage mayor takes office, city Assembly is divided over whether to hold a special election to fill seat]

It’s been a busy week since then. Quinn-Davidson said she filled her schedule to talk with her soon-to-be staff and review Berkowitz’s proposed budget, meet with business groups and plan her first meetings. She made a list of former Anchorage mayors she wanted to call to ask advice and spoke briefly with Berkowitz, who expressed support. Friends organized to bring meals to her house to help during her long days of preparation.

Now, she looks forward to getting started, she said.

“I hope you feel that genuine commitment from me as we continue to tackle the problems before us,” she said before the close of the City Hall ceremony that lasted less than four minutes.

Elected to Assembly in 2018

Quinn-Davidson, who turns 41 on Oct. 29, came to Anchorage in 2011 after stints working in land use and housing law, first in San Francisco and later the Lake Tahoe area on the California-Nevada border. But she bristles at the preconceptions that some Alaskans have about her being “a lawyer from California.”

“I think they have an image that is so different than my experience,” she said earlier this week as she walked her two dogs, Cleo and Dexter, in her Turnagain neighborhood.

Nearly all the families she knew growing up in Hayfork, California, were conservative, she said. Her childhood in that rural, mountainous region of the state coincided with the disappearing logging industry there. Her mother still lives in the same modest home where Quinn-Davidson was raised.

“We were poor. Everyone was poor, so it just felt normal,” Quinn-Davidson said. “The people who were ‘rich’ were the teachers, because they had health insurance.”

As a kid, Quinn-Davidson spent time with Christian youth groups, riding bikes on dirt roads and playing in woods and creeks. For several years, she and her family would pack their old yellow International vehicle and drive to the state of Nayarit in Mexico, where they would spend three months in the winter.

Her mother, a cook, and her father, a carpenter, split when she was about 14. When she was 16, her father died of kidney failure, and for a year she played a primary role in caring for her younger sister.

Quinn-Davidson said the death of her father was devastating and memories are somewhat blurry, but she recalled that her community rallied to help. She remembers feeling grateful, even as she coped with the loss.

“My dad was so amazing and kind and creative. I just felt so thankful,” she said. “I knew a lot of people who had dads who were just kind of not around, and my experience with my dad was so different.”

Quinn-Davidson focused on school, sports and groups in the year that followed and graduated high school as valedictorian, she said. She felt a bit of culture shock once she arrived in wealthy Santa Barbara to begin her environmental studies program as an undergrad.

“I think I showed up with, like, a dorky T-shirt and hiking boots, and people were dressed to the nines,” Quinn-Davidson said.

“Kids were driving BMWs, and I had never seen a BMW. Stuff like that. I was just very different,” she said.

It was a familiar feeling when she began law school at UC Davis. Many of her classmates were the children of doctors, lawyers and judges. Pursuing a law career seemed like a way she could right wrongs and help people, she said.

But when Quinn-Davidson moved to Anchorage in 2011, she decided not to take the Alaska bar exam. She worked first as a law clerk for two years in the federal court system. For six years, she worked as the legal affairs and land transaction director for Great Land Trust. Since last year, she has consulted for the Exxon Valdez Oil Spill Trustee Council as an independent contractor, but said she intends to take leave from that job while she serves as mayor.

Municipal manager Bill Falsey suggested she run for the West Anchorage Assembly seat vacated by Tim Steele, who resigned for health reasons in 2018. Quinn-Davidson won the special election for the seat, and was reelected earlier this year.

The view from City Hall

Now, Quinn-Davidson becomes acting mayor in a divisive time. Since spring, her predecessor has drawn both enthusiastic support and relentless criticism for his pandemic leadership. A vocal contingent of residents has opposed Berkowitz’s emergency orders that restrict business to limit the spread of COVID-19. Protesters often wave signs and blare horns outside Assembly meetings. Many in the audience cheered when Berkowitz’s resignation was announced.

Quinn-Davidson, a registered non-partisan who identifies as “moderate-to-progressive,” said she generally supported Berkowitz’s pandemic leadership and doesn’t anticipate a drastic change in direction.

“We had a good leader who I think has made really good decisions during COVID, and who really has the community’s best interest in mind. And he’s now gone, and it’s disruptive,” Quinn-Davidson said.

She said her goal is to minimize that disruption, but recognizes that she wasn’t chosen by voters and that the secret Assembly selection was unlikely to have been unanimous.

“You know, she hasn’t lived here very long, and of course she’s only been on the Assembly for two years,” Kennedy said.

Kennedy supported John Weddleton, who represents South Anchorage, to serve as acting mayor. She also favors a special election, which she said would lend more accountability and credibility to the officeholder during a difficult time, she said. The Assembly will consider holding a special election on Jan. 26, 2021.

“There’s just some absolutely huge things that we’re going to have to deal with, and I think to have somebody that’s just there accidentally is probably not a good thing,” Kennedy said.

Kennedy described herself and Quinn-Davidson as “political opposites,” which causes her concern. She hopes Quinn-Davidson will support “a budget that does not add additional burdens onto taxpayers.” But she also said Quinn-Davidson is someone she can talk to, and hopes the feeling is mutual.

Weddleton said he was willing, but not necessarily wanting, to be the acting mayor. He has no complaint about the selection process. He said Quinn-Davidson might bring a new leadership style to the role that could benefit city government.

“We kind of need a reset in attitudes and viewpoints,” Weddleton said.

“If I had been chosen, you’d have another short, gray, middle-aged, male business owner who dresses preppy standing up there,” he said.

“But her style’s different. She oozes empathy in a way that I certainly don’t. And she’s smart, there’s no question. She’s very pleasant. She’s very calm. We have the same issues and opportunities in front of us that we did before. She will present them in a way that they weren’t.”

Quinn-Davidson said she begins the job with no big priorities, other than to confront Anchorage’s economic struggles, the health emergency and pandemic-related issues. She has ideas about improving communication with Anchorage residents, particularly about assistance programs that could help them, but the time to work on that begins next week.

“I’m not trying to do any big, new, crazy things. I’m here just to take care of Anchorage,” she said.

When she was sworn in Friday, Quinn-Davidson became the first woman and first openly gay individual to serve as mayor or acting mayor of the Municipality of Anchorage. Both she and her wife of four years, Stephanie Quinn-Davidson, said it’s a significant moment, but reflecting on it isn’t the first order of business.

“It’s not lost on us that she’s the first woman and she’s the first LGBTQ+ mayor, but it’s not at the forefront of this,” Stephanie Quinn-Davidson said. “It’s hard, right? You want to celebrate that for sure. But that’s not why she’s in this position.”

“I think that for me personally, I don’t have a lot of time to focus on that,” Austin Quinn-Davidson said.

Quinn-Davidson ended her remarks on an upbeat note as Friday’s ceremony closed. She said Anchorage residents weather storms with grace, compassion and generosity.

“If the past few months have been any guide, we can expect that more challenges for our city lie ahead,” she said.

Afterward, the Quinn-Davidsons invited a couple friends to join them around a fireplace at an appropriate social distance in their yard. Whether she holds the job for three months or eight, Quinn-Davidson said she isn’t approaching it with an eye toward any other political goals. She said she’s not planning to run for mayor in the 2021 municipal election, but she also suspects she’ll enjoy the job while she has it.

“I just want to be a problem solver. Give me a problem. I’ll brainstorm with others. I’ll think about different strategies and I’ll tackle it,” she said.

“And I think that’s kind of what we need right now.”