As winter sets in and the pandemic drags on, food banks and other aid providers see a surge of Alaskans needing help 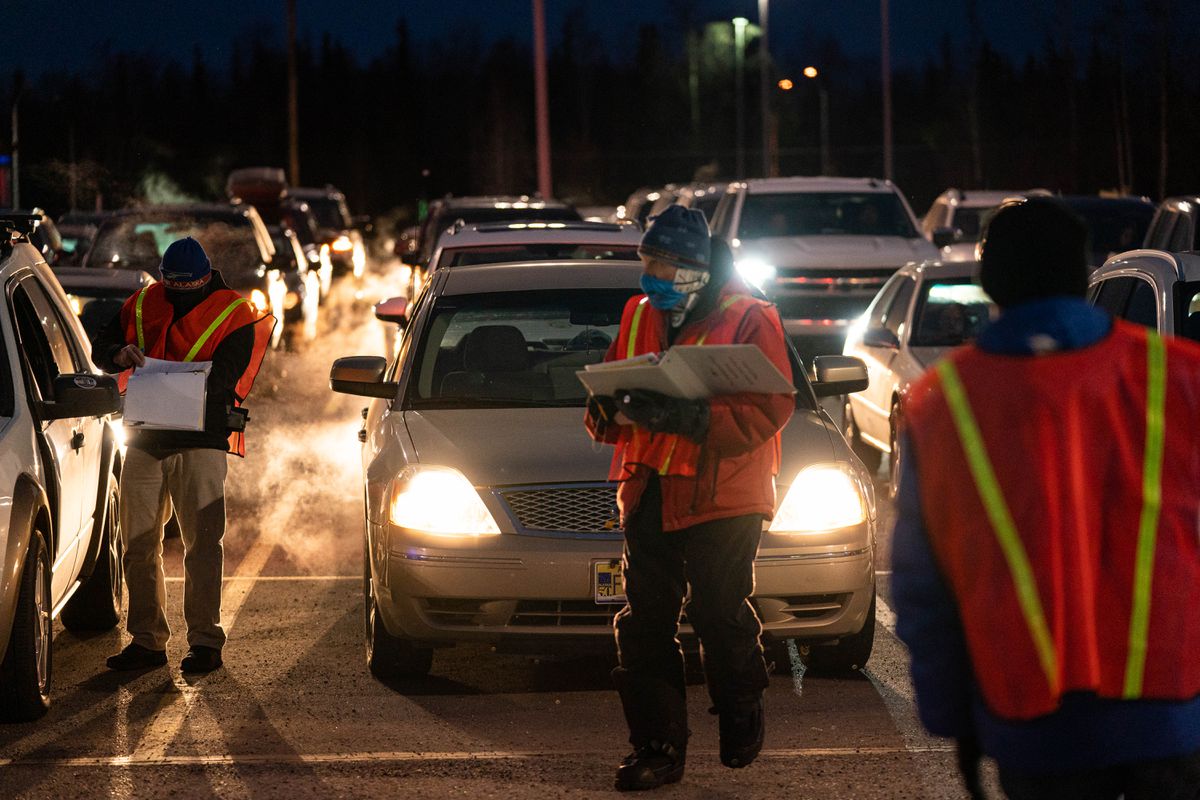 Volunteers register households and direct traffic at an emergency food distribution program run by the Food Bank of Alaska on Thursday, Nov. 5, 2020 at the former Sam's Club at Tikhatnu Commons in Anchorage. (Loren Holmes / ADN)

Volunteers register households and direct traffic at an emergency food distribution program run by the Food Bank of Alaska on Thursday, Nov. 5, 2020 at the former Sam's Club at Tikhatnu Commons in Anchorage. (Loren Holmes / ADN)

On Thursday night, a former Sam’s Club store in north Anchorage looked like it never closed. The parking lot filled with cars. Inside, workers hauled stacks of boxes to cargo bay doors.

Instead of delivering bulk supplies, they were handing out emergency boxes of food for the Food Bank of Alaska, helping local families through the COVID-19 pandemic.

The number of households visiting the Sam’s Club food distribution site, created because of the pandemic, hit 2,800 in the month of October, more than doubling from an average of 1,300 in August and September.

As snow fell, Wayne Cornish, waiting in the drive-thru line in an idling Subaru wagon, said the free food has been “heaven sent" for him and his fiancé. He lost employment this summer as a construction worker.

Other Alaskans are increasingly in the same boat. Eight months into the COVID-19 pandemic in Alaska, social service providers say they’re seeing rising demand from people who need help with life’s most basic needs, including food, rent and utilities.

The growing calls for help come as once-ample government aid funneled directly to individuals has run dry or been delayed, the providers say. In addition, COVID-19 cases are on the rise, and the lack of in-person classes for children has forced thousands of parents to stay home.

Alan Budahl, executive director of Lutheran Social Services of Alaska, said the “emotional and spiritual need” in people’s voices is more tangible than ever.

Some people are deep in debt and their bills are stacking up, he said. They need help with car payments, insurance, winter tires, food for their families and more.

To make matters worse, winter is coming and home heating costs are set to soar, he said.

“The longer we go into this pandemic, the more people are hurting," he said. “They’ve used savings, they’re maxing out credit cards, they’re borrowing from family or friends or their church."

Daily calls to United Way of Anchorage’s 211 assistance program, for help with a variety of needs including rental assistance, have risen to more than 450 a day, more than three times higher than when the pandemic began in March.

“The volume (of calls) is really intense,” said Michele Brown, senior adviser and former president at United Way of Anchorage. “There are some really heartbreaking stories.”

“We continue to see a significant number of new families all the time, which is historically not common,” she said.

Lennon Weller, an economist with the state of Alaska, said this summer’s slow economic recovery is tapering off in part because federal stimulus programs have largely run dry.

After falling for weeks, the number of people receiving unemployment benefits in Alaska plateaued in October, at around 40,000 or 12% of the workforce.

Alaska on Friday began distributing a $300 weekly unemployment boost for up to six weeks — or up to $1,800 an individual. It was approved by President Donald Trump in August to help replace the $600 boost that ended in July.

But the money was delayed for weeks after it was promised by the state, frustrating many beneficiaries who need to pay bills.

Soldotna resident Dennis Alder said he’s been out of work as a drilling coordinator since March, when the oil industry slowed production after oil prices crashed. He pays monthly living costs for his disabled wife, who is in an assisted living home, and the mortgage on their house.

“I’ve just about exhausted all my savings and there’s not many jobs out there,” he said, though he hopes to find employment this winter if work resumes on the North Slope.

On Friday, he received notice from the state that he’d receive the $1,800 boost on Monday. It will help him and tens of thousands of other Alaskans, he said.

“It came just at the right time,” he said.

But, he said, it will be gone in about a week.

Alder volunteers at the drive-through Kenai Peninsula Food Bank, where volunteers hand out about 90,000 pounds of food a week. They often run out of food before demand is met, he said.

“The lines are just getting longer and longer,” he said.

Cara Durr, public engagement director for the Food Bank of Alaska, said many families face unusual situations that have forced them to look for aid for the first time.

Also, she said, the growing number of Alaskans who have gotten COVID-19, and their families, have had to stay at home to quarantine or recover. Many of those people have been kept out of work, too, she said.

Another challenge is that many households that once enjoyed two incomes are down to one, with a parent staying home to manage children that are attending online-only classes.

And those kids staying at home instead of going to school are thinning out pantries quickly, Durr said.

Demand has risen sharply not only at the Sam’s Club site, but at other Food Bank of Alaska distribution sites in Anchorage, she said.

The United Way of Anchorage in recent weeks has seen an “acceleration” of calls, especially for rental assistance, to the 211 line, said Sue Brogan, chief operating officer for the agency

Lutheran Social Services, which provides the rental aid after people contact 211, is seeing more than 95 people a day applying for the aid for the first time, Budahl said.

The rental aid, up to $1,000 monthly, was recently reduced from three months to two to ensure those first-time applicants also get help, he said.

Some people have reported finding work, but they often make less than before the pandemic, he said. And they still have to catch up on bills, he said.

Carolee Newman lost work this summer after the Northway Mall common area closed, shutting down the pull-tab business where she worked.

The single mom with three children is now working at an affiliated pull-tab store, but not full time, she said.

The income is helpful, but not enough to pay for rent and everything else, she said.

So on Friday, she applied at Lutheran Social Services for rental aid, something she’s never done before. The agency said it will cover two months’ rent.

“Oh my gosh, I’m shaking I’m so happy," she said. “Maybe my kids will have a decent Christmas.”

Correction: An earlier version of this article incorrectly identified Sue Brogan as the community engagement director for United Way of Anchorage. She is chief operating officer.