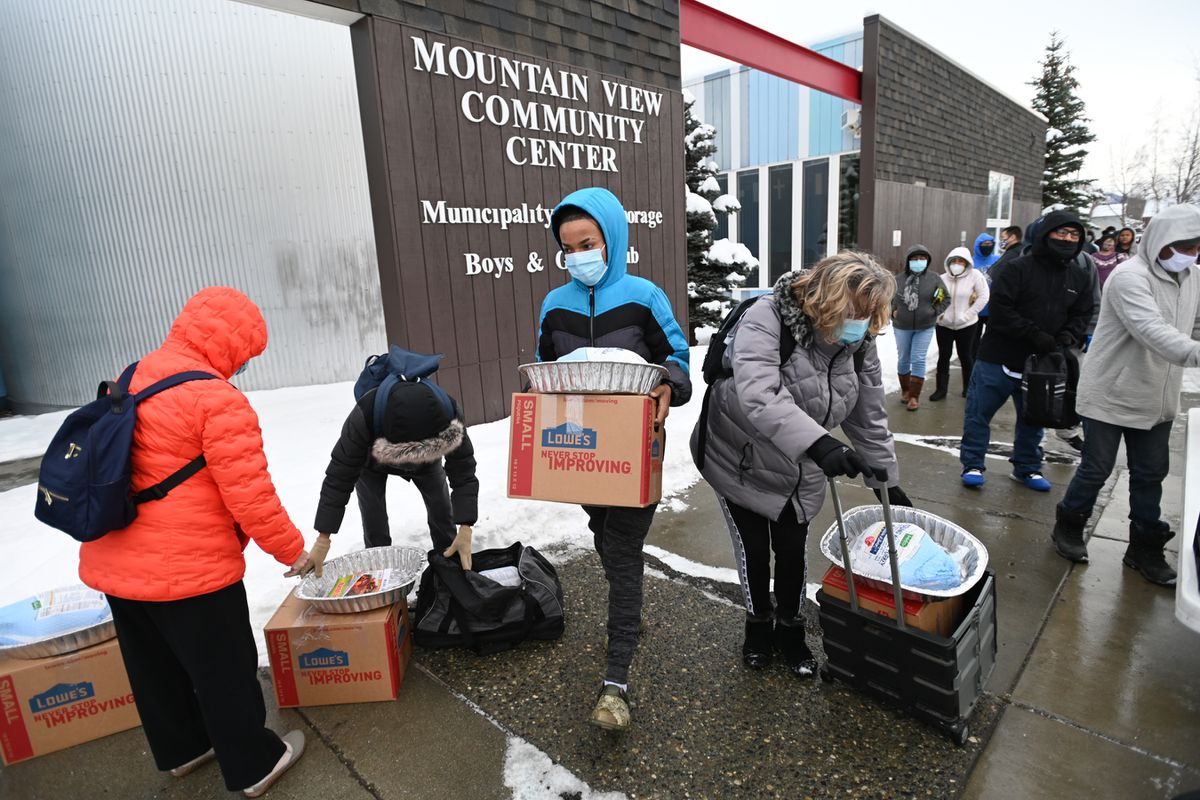 People received all the fixings needed to make a holiday meal, including a frozen turkey, during the annual Thanksgiving Blessing food distribution at the Mountain View Community Center Boys and Girls Club on Monday, Nov. 23, 2020. (Bill Roth / ADN)

People received all the fixings needed to make a holiday meal, including a frozen turkey, during the annual Thanksgiving Blessing food distribution at the Mountain View Community Center Boys and Girls Club on Monday, Nov. 23, 2020. (Bill Roth / ADN)

As a van brimming with boxes of food and frozen turkeys pulled into the lot at the Mountain View Community Center in Anchorage on Monday afternoon, a long line of people, wearing face masks, mittens and coats, stood outside in the cold, waiting.

Workers from the Food Bank of Alaska and volunteers from the Boys and Girls Club and a local church jumped into action, quickly unloading the boxes — filled with the makings of a Thanksgiving meal — and distributed them to the waiting families.

Every year, the Food Bank of Alaska’s Thanksgiving Blessings event gives out thousands of meals to families in need in Anchorage and the Mat-Su, partnering with churches, charities and other community groups to help raise money and collect the food donations.

Volunteer Luis Polanco said he saw many of the usual neighborhood families pick up donations on Monday, but he saw many new people needing food, too.

“So that’s the new normal I guess,” he said.

St. Patrick’s Parish in Northeast Anchorage also ran a Thanksgiving Blessings distribution center. On Monday afternoon, at Muldoon Road and East 20th Avenue, traffic was jammed as cars tried to make their way through the intersection to the church to pick up food.

This Thanksgiving, the need is greater than it was the past. Due to the economic impact of the coronavirus pandemic, the Food Bank expects to distribute more than 11,000 meals, about 3,000 more than last year, said Cara Durr, a spokeswoman for the Food Bank.

“We’ve seen a dramatic increase in the need for food assistance since the beginning of the pandemic,” Durr said.

Other Alaska aid organizations have also reported a spike in need as the pandemic drags on.

On Monday, a “small army” of volunteers distributed food at seven different sites across Anchorage, said Durr. This year, the Food Bank has spent more than $189,300 on turkeys alone, Durr said.

At the Mountain View distribution site, Tessie Hardiman-Agimuk loaded up her sled with her two small children, one frozen turkey and a big cardboard box of Thanksgiving dinner foods, and began dragging the sled through the snow.

Every year, Hardiman-Agimuk picks up the main ingredients for her family’s Thanksgiving meal at the Mountain View Community Center. From there, it’s just a short block of sled-dragging to her home. Her 4-year-old, Violette Gallegos, is excited about the upcoming family holiday and eating her favorite foods:

“Lollipops... and I love strawberries. And turkey,” Gallegos said.

The donation doesn’t include lollipops or strawberries, but Hardiman-Agimuk gets boxes of stuffing, vegetables and other traditional Thanksgiving foods.

Usually Hardiman-Agimuk would get a chance to go inside the community center and “shop” for supplies, picking out what food to take home.

But this year, due to the health concerns of the pandemic, the event had to run a little differently, Durr said.

As a COVID-19 health precaution, most sites ran drive-thru distributions only, where volunteers loaded the pre-packed boxes into the backs of cars.

In Mountain View, the site was walk-up only, and boxes were also pre-packed.

[If you must travel over Thanksgiving, here is how to minimize your COVID-19 risk]

Durr said that this year, the Food Bank is serving many new families who have been laid off or lost jobs due to the pandemic. Many have never been to a food pantry before and never expected to need to rely on food donations, Durr said.

“I think it’s just the reality for so many people in Alaska right now,” Durr said.

Still, there was already a large community need before the pandemic, she said.

But Cannon realized an easily-accessible walk-through site was critical for his community, because many families can’t drive, and worked with the Food Bank to set one up.

Most of the volunteers who turned out to help are neighborhood locals, he said.

“There’s so much value in neighbors volunteering to help out neighbors, as opposed to the more traditional model of outsiders who want to come in to help the needy,” Cannon said. “We are here and we’re in this together. We’re all struggling alongside one another so we just want to show up for each other.”