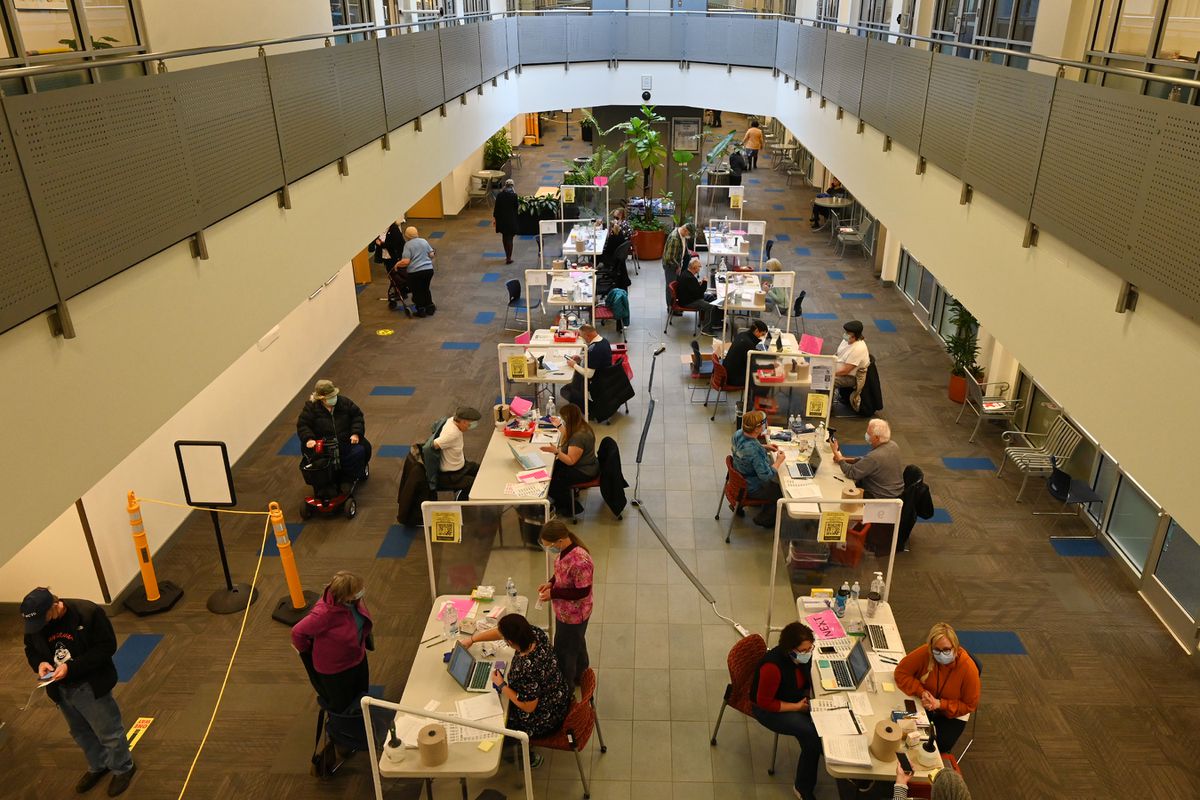 What began as a small vaccine clinic intended for health care workers unexpectedly became the first large-scale vaccine operation for seniors in Anchorage.

The Anchorage School District, which is working with the state on the COVID-19 vaccination rollout, didn’t plan to take on a role in vaccinating Anchorage’s senior population, according to district Healthcare Services Director Jennifer Patronas.

But on Thursday morning, on the first floor of the Anchorage Education Center, a team of school nurses at a cluster of stations lining the hallway gave senior citizens their first COVID-19 vaccine shots.

It opened Wednesday and will remain open through next Friday, Jan. 15. By Thursday at 5 p.m., it had already administered a total of 988 vaccine doses. Many of those doses went to people without appointments who were on a waitlist, according to district spokeswoman Lisa Miller.

The state’s vaccination rollout for seniors has been clouded with confusion, and last week, some people over 65 who were technically not yet eligible to register for an appointment booked time slots. On Wednesday, the state officially opened appointments to that group and the slots generally filled up in less than a half-hour.

In Anchorage, some seniors who were struggling to sign up online were offered vaccines through the clinic at the Anchorage Education Center. Still, some others haven’t been able to make an appointment at all.

Dr. Anne Zink, the state’s chief medical officer, apologized to seniors on Thursday for how difficult the statewide sign-up process was on the first day appointments became available.

“It was hard, it was rough, and it was a lot of hours” that people spent trying to make appointments, she said. “We commit to you all to continuing to improve, and getting vaccine out as fast as we possibly can to those who want it.”

At the Anchorage Education Center clinic, some people showed up without an appointment or a waitlist spot.

“We want to say yes to everyone if we can, and so far, we’ve been able to,” Miller said.

But it is not a walk-in clinic and people should make an appointment or get on a waitlist, Miller and Patronas emphasized.

The district had plans to eventually vaccinate its about 6,000 staff members, and had school nurses trained to administer both the Pfizer and Moderna vaccines, Patronas said. State health officials had asked if the district could also help vaccinate health care workers, so about a week ago, it opened its appointments to them, she said.

“Within 24 hours, all of our appointments were booked up and we had a waitlist of over 1,000 people,” Patronas said.

It was far more than expected, and most weren’t health care workers — they were people over 65, many over 80, she said.

“So with a waitlist of over 1,000 people above our appointment capability, we ended up standing up a really large-scale organized pod,” Patronas said. “We started off with six vaccination station stations and now we have 12.”

On Thursday, the state sent over another 1,500 doses, on top of the 600 the district started with.

“We’re super excited, especially to be vaccinating our elders in our community,” Patronas said.

The school district doubled its capacity at the education center to ensure everyone on the waitlist could get a vaccine, so it could help the many people showing up without appointments who were unsure how to navigate the state’s system.

On Thursday, outside the school administration building on East Northern Lights Boulevard, a short line of mostly seniors stood waiting. Once inside, people over the age of 65 could get help registering with the state’s vaccine distribution system and getting scheduled for an appointment or put on a waitlist.

All who showed up on Thursday, even without a prior appointment, received their first shot of the vaccine that same day.

“We’re scheduling them and just having them get vaccinated on the spot,” Patronas said. “Yesterday we had 104 appointments available, and we gave 268 vaccines.”

In what is usually the school board’s meeting room, people waited for about a half-hour in case they had a highly rare reaction to the vaccine, and also were scheduled for their second shot.

For Jerry Garden, 76, getting a vaccine was “a relief after a year of craziness, that’s for sure,” he said after sitting for his first dose. Garden, a retired molecular geneticist, said he lives alone and spent most of the year indoors and isolated, except for some forays outside hiking and skiing.

“There was always that lingering fear in the back of my mind — that ‘what-if,’ ” Garden said.

Once he receives a second shot in a few weeks, most of that fear will be eased.

The clinic won’t be able to continue in the same capacity once schools reopen and nurses return to their usual posts, Patronas said. But it will give a second vaccine to everyone who gets their first vaccine from the school district.

Statewide, vaccine appointments right now continue to be limited, but new ones are being added to the site on a fairly regular basis, said Tessa Walker Linderman, who helps run the state’s vaccine task force. Another appointment-based COVID-19 vaccination clinic will be held over the weekend at the Alaska Airlines Center in Anchorage.

“There are operators who are able to help people looking for an appointment, or who are struggling with the website,” Walker Linderman said. “You do need to leave a message, but you will get a call back.”

Susie Whited, a school nurse at South High School, and Krista Hepler, a nurse at Huffman Elementary, worked together on Thursday to administer vaccines.

People receiving them “have the hope on the horizon that they’re going be able to see their grandchildren again, so there’s a lot of excitement,” Hepler said.

Whited was able to vaccinate her own parents, both in their 70s. She had only seen them over Zoom during the pandemic, she said, tearing up.

“A couple nurses came in crying happy tears — they’re just so happy to be a part of something so important to our community,” Patronas said.