Renaissance man Shawn Lyons, who wrote the book on Alaska hiking, dies at 66 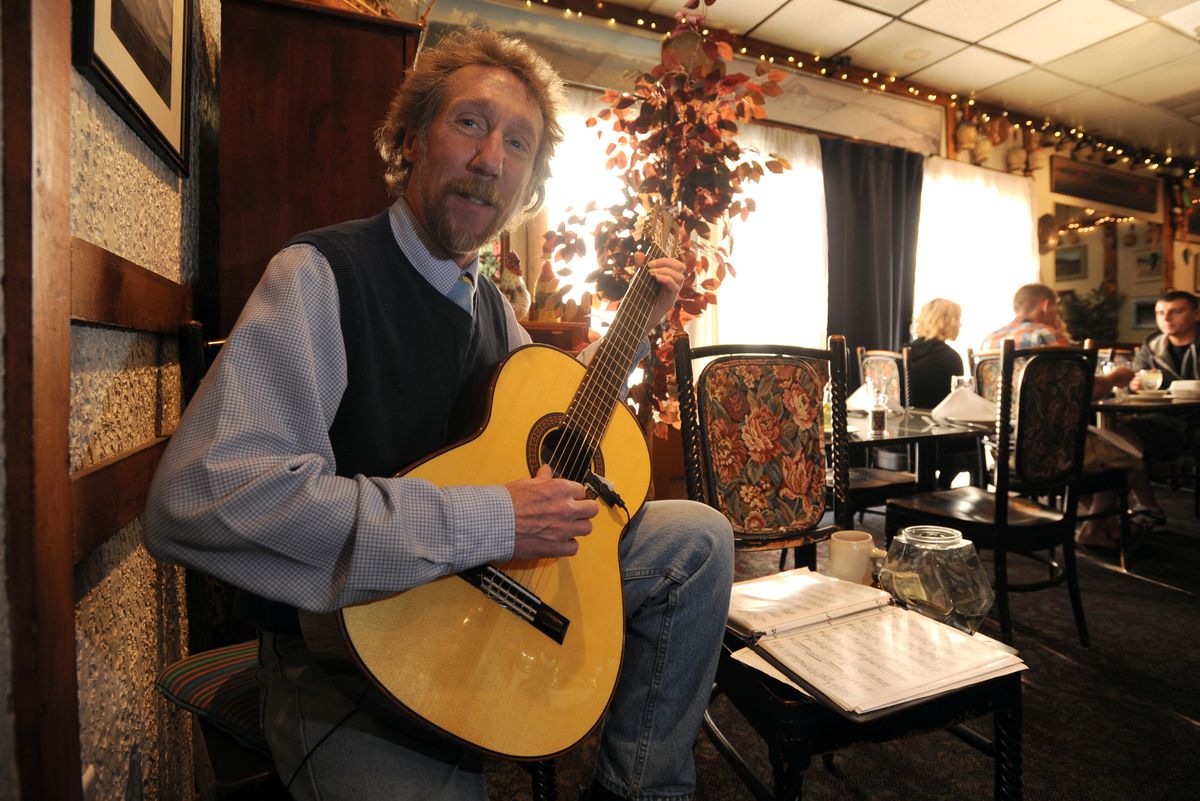 Shawn Lyons — poet, classical guitarist, teacher, historian, restauranteur and an adventurous hiker who left his footprints across the Chugach Mountains and far, far beyond — died suddenly Tuesday at an Anchorage hospital. He was 66.

Lyons was the unique center of a wildly diverse Venn diagram. He wrote the multi-volume “Walk-About Guide to Alaska,” was a board member of the Alaska Huts Association, played classical guitar nightly at a Mediterranean restaurant, taught music and English at UAA, wrote poetry and was a regular on a podcast that discussed philosophy and psychology.

He was a nine-time winner of the 105-mile snowshoe division of the original Iditaski wilderness race, a man known by friends as the Energizer Bunny for his endurance — he could go for miles and miles with no more than a pocket full of hard candy to sustain him.

He wrote a regular column about hiking for the Daily News for many years, and he is believed to be the first person to hike the 12 tallest peaks in the Chugach Front Range in a single push, something he did in 27.5 hours in 1990.

“It’s humbling to think how much ground he covered and how many mountains and ridges and alternate accesses that he figured out and went out and explored,” said John Wolfe, co-author of “55 Ways to the Wilderness.”

Lyons died of unknown causes at an Anchorage hospital on Tuesday.

“It’s not clear to us what happened. It’s just shocking and sudden,” his younger sister, Sarah Lyons, said from Massachusetts.

Lyons lived alone and had no relatives in Alaska — he came here from Massachusetts more than 30 years ago — but had a large collection of friends. More than one called him a Renaissance man, including Tucker Spohr, a former Alaskan who lives in Oregon.

“He’s just an amazing person, and my oldest friend,” Spohr said. “He’s the most optimistic person I’ve ever run into. We had several run-ins with disaster over our many hikes, and he’s always been the stalwart.”

“His car would pull up in our cul-de-sac and she would just go crazy with excitement,” Wolfe said.

Lyons grew up in the Boston area, one of six children who made regular treks into the White Mountains. At age 17 he hiked the Appalachian Trail from Georgia to Maine and at age 18 he hiked the Long Trail from Massachusetts to Canada, according to his website.

He studied English at UMass-Amherst and had a couple of history degrees, according to Spohr. In Anchorage, he taught and performed classical guitar.

For years he played nightly at Villa Nova Restaurant, which he bought and ran for a couple of years after the original owner died. When Villa Nova closed, Lyons began playing for the dinner crowd at Turkish Delight.

“Over the last two years, we sat and talked every night for hours after we closed,” said Murat Demir, co-owner of Turkish Delight. “We talked about everything from literature to music to art to philosophy every night. It was profound. He was such an incredibly smart man.”

Lyons participated with Demir in a podcast called “Our Thoughts Tonight,” and was busy posting his poetry and music on a variety of platforms. He was more than twice as old as Demir, 29, but the age gap was immaterial.

“It was the fact that he was young at heart spiritually and also physically,” Demir said. “In a similar manner to Da Vinci, he didn’t stop at whatever he was doing. He wasn’t done with this world yet. He had so much to do.”

“It’s hard to overstate what a delight he was to work with,” O’Harra said. “I’m sure you’ll hear something like this a lot, but it’s true. If I were embarking on a death-march, nut-case trip to the North Pole, he’d be on my list of preferred companions. As much for his good humor and optimism during the horizontal blizzards as for the fascinating conversation in the tent at night.”

O’Harra said by email the loss of his friend feels immense, “but I woke up Thursday with his merry voice in my head — ‘Don’t mope around! Go for a hike with Suka!’ (My dog … Another friend of Shawn’s.)”

Demir said he’s struggling to accept that Lyons is gone. Lyons played at Turkish Delight on Saturday night, “and he seemed 100%.”

Sarah Lyons said medical officials in Anchorage chose not to do an autopsy, “which is kind of upsetting,” she said. “It was just a bit distressing to not know precisely what happened.”

She said she has been uplifted in recent days by people in Anchorage who have reached out to her. She said she will remember him most as a collector of friends.

“He ended up in the right place. He was a good friend to people, and one of the solaces has been the kindness I’ve seen from people in Anchorage. He was a kind person who ended up in a kind place.”

Demir said he was a teenager working at Villa Nova when he first met Lyons, and from those days until last Saturday, Lyons would close his nightly performance by playing “Dance Of The Blessed Spirits,” from the Gluck opera “Orfeo and Euridice.”

Demir intends to continue that tradition in memory of Lyons.

“That piece always stuck out to me,” he said, “so we’re just going to play it over our speaker every night as we lock the doors.”

It is with great sadness that we announce the passing of our longtime friend, musical talent and Turkish Delight family...

An earlier version of this story misstated where Lyons attended college.