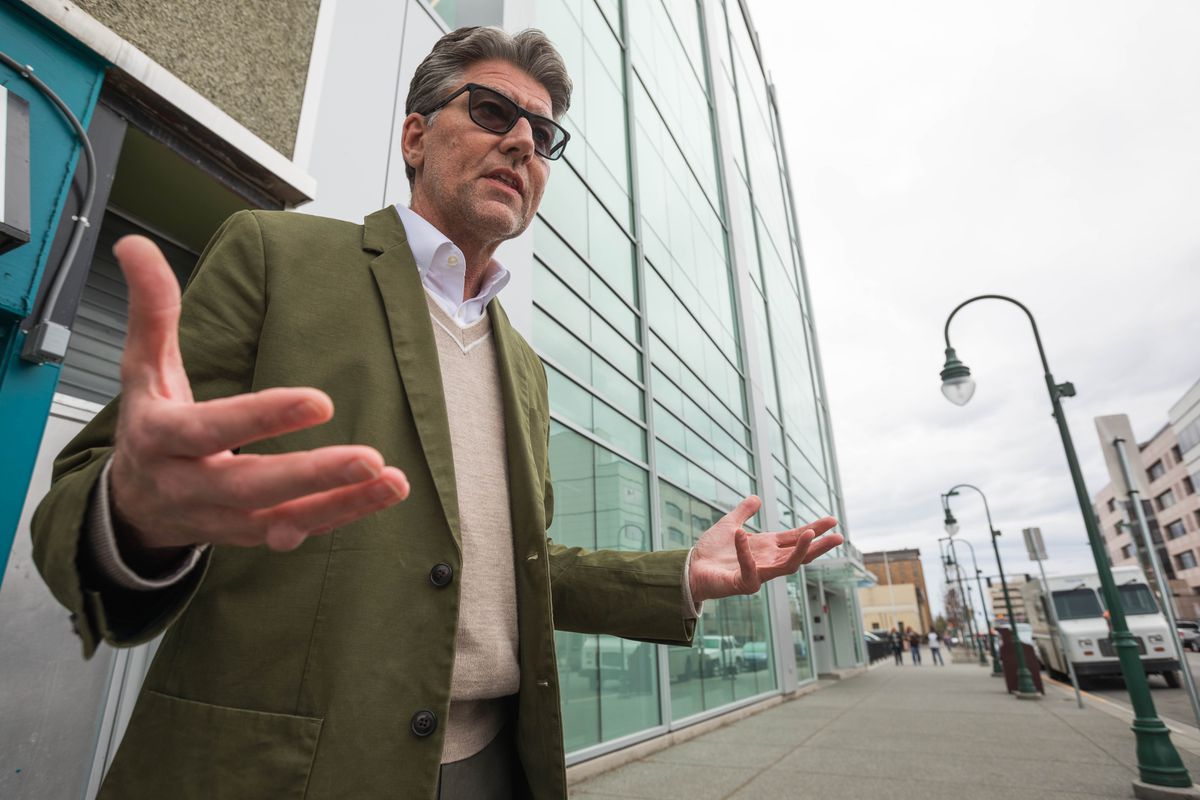 Andrew Halcro stepped down as head of the Anchorage Community Development Authority on Friday after five years. In a resignation letter addressed to Acting Mayor Austin Quinn-Davidson, he said the decision was made amid disputes with municipal staff and the agency’s financial difficulties during the pandemic.

The Anchorage agency facilitates development and public parking in the city.

Halcro, a former state representative, said in the letter that the agency and its private-sector partners in recent months experienced an “alarming pattern of bad faith dealings” from municipal staff involved with the agency, during what he called the most critical time in its history.

“In all honesty over the last several months I have felt like I have been leading this organization through the twilight zone,” Halcro said in the letter. “During that time we have suffered unexplained delays, false and misleading statements to our board and a failure to deliver on promises that have put this agency’s fiscal solvency and public reputation at risk. While I absolutely have no doubt that you were completely unaware of these promises being made by your senior leadership, it makes the point that trust with your staff is no longer salvageable.”

Halcro declined to comment for this article. His resignation was effective immediately.

Based on the letter, much of the dispute seems to be centered around what Halcro describes as broken promises of “revenue relief” for the agency.

In the letter, Halcro accuses Alex Slivka, the municipality’s chief fiscal officer, and Chris Schutte, the economic and community development director, of making false and misleading statements to the board since last fall.

The two municipal officials are also voting members of the board. They did not return requests for comment on Friday.

“For eight months, including the last five you have been mayor, your staff who work a combined 150 steps from your desk, have been making million dollar promises about relief,” Halcro said in the letter. “For eight months as ACDA board members your staff advocated and voted to pursue projects they knew we couldn’t afford without the money they promised to deliver. But they didn’t deliver. As of today they have yet to offer any coherent reason why they misled the board.”

A quasi-governmental agency, the authority did not receive COVID-19 grants or loans, Gant said.

In the letter, Halcro thanked Quinn-Davidson for working to resolve the issues, saying “once you became aware of our dire situation you jumped in to help and have always been available ... However, I can no longer lead ACDA when the people I report to at the MOA have proven themselves to be destructive and untrustworthy.”

Quinn-Davidson said in a statement on Friday that her “team has worked closely with Mr. Halcro and ACDA to address its financial challenges, and we were making progress together despite challenging circumstances.”

The mayor’s office, in a statement late Friday from Communications Director Katie Scovic, responded to some of Halcro’s allegations.

Municipal staff have acted in “good faith” with the agency and its partners, the statement said. The acting mayor and staff will continue working with the agency to find ways to protect the agency’s fiscal solvency and to advance projects, it said.

“Mr. Halcro’s resignation letter points to ways our staff could have communicated more clearly, which we take seriously,” the mayor’s office said.

“We are disappointed to see Mr. Halcro go, but his abrupt departure fails to shake our commitment to work with ACDA’s board and staff during this transition,” the statement said.

Halcro, appointed by former Mayor Ethan Berkowitz, had previously planned to leave his position in June, with the change of administration.

The authority oversees EasyPark Alaska, which manages thousands of parking spaces in downtown Anchorage. It works with developers on projects, such as the proposed $50 million 12-floor boutique hotel and apartment project at Sixth Avenue between G and H streets where the authority owns the block.

Halcro in his letter said that the mayor’s staff failed on a promise to deliver $5.7 million in funds, which the letter describes as the authority’s equity in the Anchorage Police Department headquarters downtown.

Halcro’s letter also says municipal staff last week “threw a wrench” into the Sixth Avenue hotel and transit and residential project, just as the board was preparing to approve an agreement with the developer, putting it at risk.

The city has supported the project and is still working to understand ways to move it forward, the statement from the mayor’s office said.

Developer David Irwin backed out of the project last year amid a disagreement with the authority.

Larry Cash, founder of RIM Architects, is part of a new group of small investors in the project.

Cash, who has been involved with the project for five years, said on Friday he would not comment on the dispute between Halcro and city staff.

The project would be “transformative” for downtown and the developers are focused on getting it done, Cash said. The other investors are Paul Wiltse of the Venture North Group, Jamie Kenworthy of the 49th Fund and Joe Jolley of Cornerstone General Contractors. They’ve also been involved with the project a while, Cash said.

“This new group is trying to do everything we can to keep this project alive, and we are making good progress toward that,” Cash said. “We’ve had a really good working relationship with ACDA and the board and we just want to see that continue.”

In the letter, Halcro also said he was upset by the process involving the mayor’s removal of Chair Terry Parks, a developer who had been with the board since 2009.

Halcro said he received no phone call from the mayor’s staff about the decision to not reappoint Parks.

“If they would have called me I would have said my agency is in the most difficult stretch of its history and Terry has been my best advisor in trying to navigate declining parking revenues and the costly broken promises from your staff,” he said. “But they didn’t bother to call me.”

“This means I have been robbed of my key advisor and ACDA has been robbed of a valuable board member,” he said. “Where is the accountability for any of this behavior?”

Quinn-Davidson said in the initial statement the administration has been working to diversify the city’s boards and commissions.

“The board change that Mr. Halcro references in his resignation letter came as part of this larger effort,” she wrote.

In the later statement, the mayor’s office said, “Mr. Halcro, Mr. Parks, and Mr. Rumley were each informed of the new appointments to the board before they were made public. Mr. Parks and Mr. Rumley have served ACDA and this city well over the years and we appreciate their service.”

Mike Mills, an attorney with Dorsey and Whitney who has been with the board for several years, will serve as chair.

Anchorage’s mayor appoints nine of the 11 members to the board, with approval from the Anchorage Assembly. Two assembly members also serve on the board.

The authority’s year-end cash reserves dropped from $4.4 million to $1.8 million during the pandemic, budget documents show.

“We have scaled back as far as we can go,” she said.