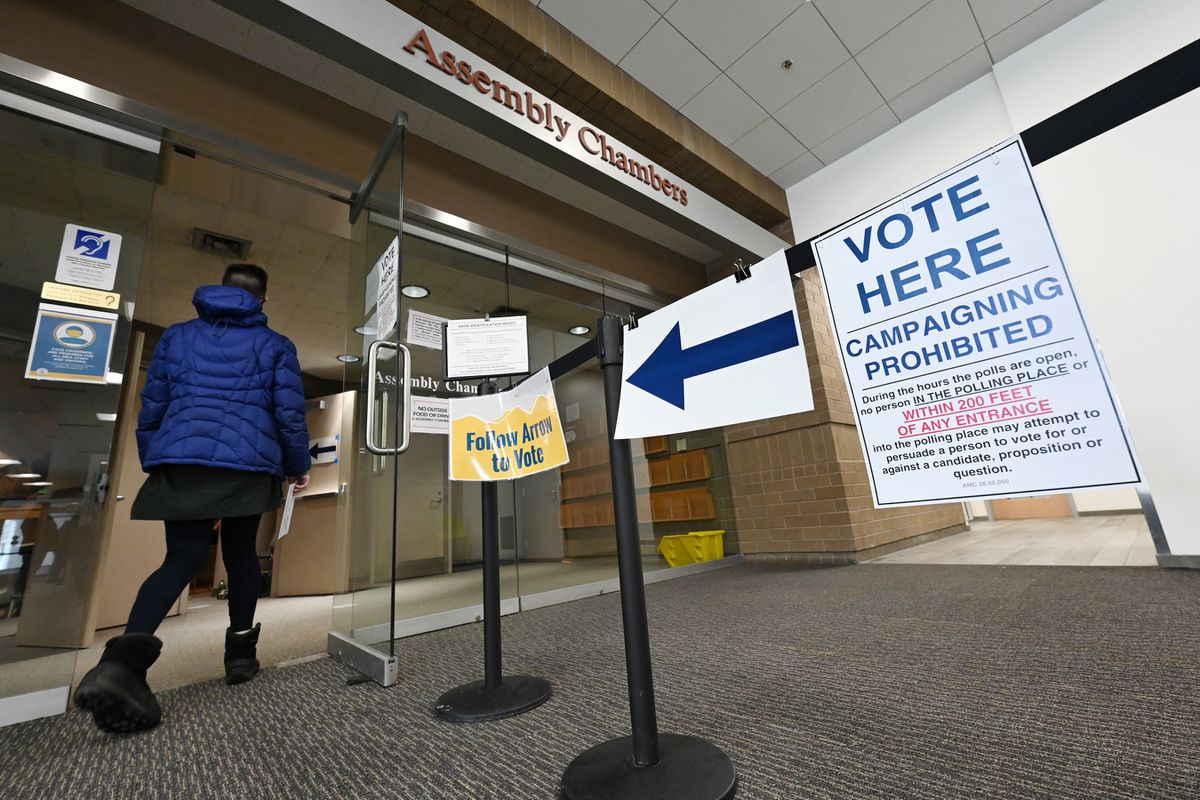 A voter drops off a vote by mail ballot for the regular municipal election at the Anchorage Vote Center in the Loussac Library on Wednesday. (Bill Roth / ADN)

A voter drops off a vote by mail ballot for the regular municipal election at the Anchorage Vote Center in the Loussac Library on Wednesday. (Bill Roth / ADN)

So far this year, many Anchorage voters are taking their time returning their ballots, if they decide to vote in the municipal election at all.

As of Wednesday, 21.7% fewer ballots had been returned to the city’s election center compared to the same time before the election in 2018, data from the municipal clerk’s office show.

Deputy Municipal Clerk Erika McConnell said that this year, ballot envelope return totals are lower than 2020 and 2018 to date, but higher than 2019.

Municipal elections that include mayoral races typically draw a higher voter turnout, according to the clerk’s office.

But last year at this time, when there was no mayoral race, voter turnout was again higher than this year.

With just six days until the April 6 election, the low ballot return numbers have left some campaigns concerned and speculating as to why this year is so different.

“As we’re contacting the voters, we’re hearing that many of them are still undecided at this point,” said Brian Mentzer, campaign manager for mayoral candidate Mike Robbins.

This year’s race includes 15 candidates for mayor. In 2018, the race pitted incumbent Berkowitz against eight other candidates. It was a smaller pool of choices, Mentzer said.

[Ballots are in the mail for the Anchorage election. Here’s how to make sure your ballot is counted]

This year, six of the candidates have been actively fundraising and advertising in the nonpartisan race. Three of those candidates are right-leaning, Mentzer said, and they have described themselves as more conservative. The other three Mentzer sees as leaning more to the left.

Other mayoral campaigns had similar theories.

“Our sense was there was a very large proportion of undecided voters, and that people are actually taking their time to kick the tires and do their homework,” said candidate for mayor and former city manager Bill Falsey.

A large number of voters in Anchorage are registered as nonpartisan or undeclared, according to state data.

Mayoral candidate George Martinez also pointed out that this is the first election following a full year of the ongoing coronavirus pandemic, and said that a dynamic of intense and sometimes “toxic partisanship” could be affecting voters following the presidential election.

“It is just as a very different year. It’s hard to match it up to any other year,” Martinez said. “With the vote-by-mail, I think the indication is that there may be some different movement and different choices that are happening that makes it look a little more anomalous.”

[Q&As with candidates for Anchorage mayor and School Board]

The new vote-by-mail system was largely implemented to help increase voter turnout in municipal elections, said Assembly member Pete Petersen, who is chair of the Assembly’s Ethics and Elections Committee.

Petersen said he was surprised and concerned by the lower number of ballots being returned.

Ballots were mailed out on March 15 and envelopes must be postmarked by the April 6, election day, to be counted.

McConnell said in an email that the city has mailed out 229,835 ballot packages this year.

By the cutoff date to register to vote in this election, there were 236,619 registered voters in the municipality, she said.

There are 15 mayoral candidates on the ballot, along with four school board seats with two or more candidates each, and 11 different propositions, including one to help fund police body cameras.

Because there are so many candidates for mayor, that race is likely to end in a runoff between the top two vote earners on May 11. To win the April 6 election outright, a candidate must win 45% plus one vote.

There are no runoffs for school board seats, and the candidate who takes the largest chunk of the vote for each seat will win. No Assembly seats are up for election this year.

Though it is now receiving ballots, the city’s election center does not tally votes until April 6. As ballots continue to flow in by mail, vote tallies will change up to the certification of the election results on April 20.

Voters can return ballots by mail, but envelopes must be postmarked by election day. There are also secure ballot drop boxes placed around the city. A map of locations is available online. It is also possible to vote in person at one of the three vote centers, which opened for voting on March 29.