Pilot in fatal Southeast crash had shut off one of plane's engines, NTSB says 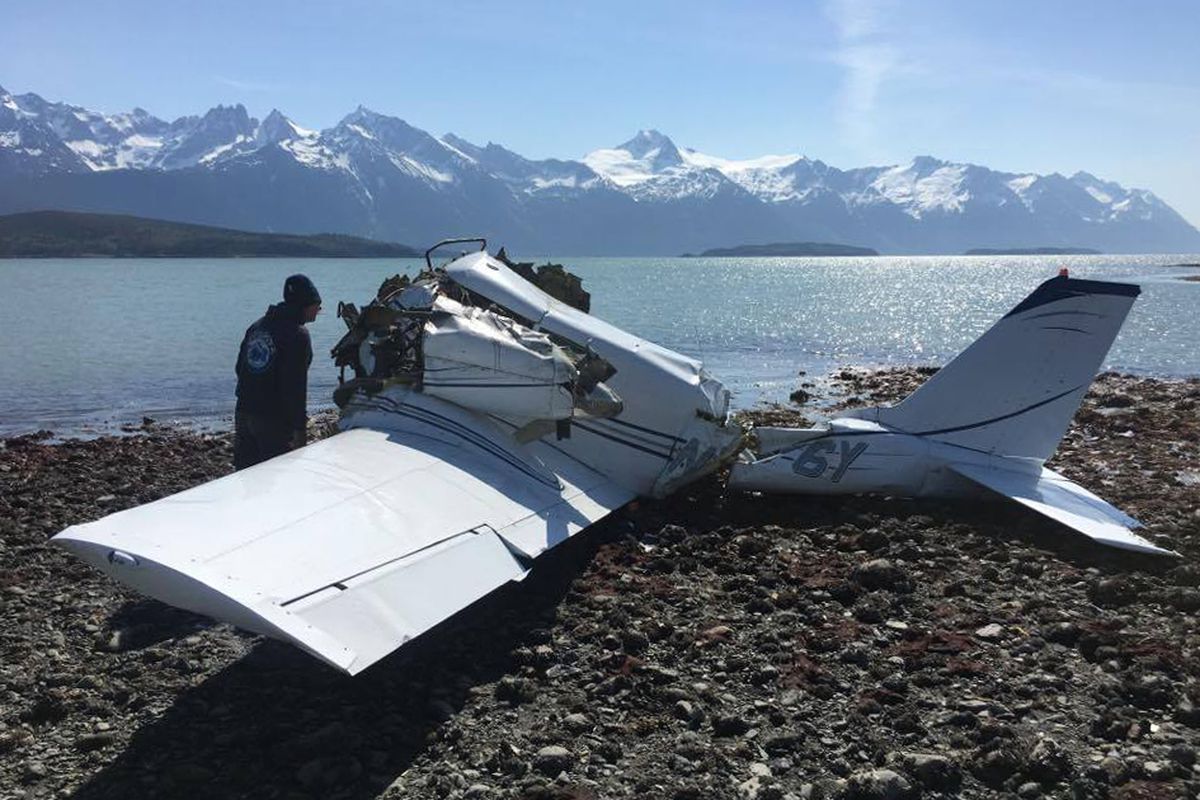 Tom Faverty peers into the wreckage of a Piper Comanche that crashed on the shore south of Haines on Saturday, May 27. As the tide came in, Faverty, wife Patricia, son Kirby, friend Steve Dice and tour guide Wiley Betz struggled to keep the plane afloat and crash survivor Chan Valentine, trapped inside the wreckage, above water. (Photo courtesy Patricia Faverty)

Tom Faverty peers into the wreckage of a Piper Comanche that crashed on the shore south of Haines on Saturday, May 27. As the tide came in, Faverty, wife Patricia, son Kirby, friend Steve Dice and tour guide Wiley Betz struggled to keep the plane afloat and crash survivor Chan Valentine, trapped inside the wreckage, above water. (Photo courtesy Patricia Faverty)

The pilot of a twin-engine plane that crashed near Haines late last month, killing two people and leaving a third gravely injured, had shut down one of the aircraft's engines in flight, according to the sole survivor.

The Piper PA-30 was en route from Juneau to Haines when it crashed at about 11 a.m. May 27, National Transportation Safety Board investigators said in their preliminary report. Pilot David Kunat and front-seat passenger Stanley Su Quoc Nguyen, both 29, died when the Piper crashed on a beach just above the waterline at Glacier Point, about 12 miles southeast of Haines.

Rear-seat passenger Chan Valentine, 31, was saved by locals who used a backhoe to tow the wreckage up the beach as the tide came in. He was extricated by medics and flown to Seattle for treatment, where he was interviewed by an NTSB investigator.

"(Valentine) reported that about 20 minutes into the flight, the pilot intentionally shut down the right engine and was demonstrating how to restart the engine during flight," NTSB staff wrote. "Despite several attempts, the engine would not rotate through with electrical power to start the engine."

Clint Johnson, the NTSB's Alaska chief, said such shutdowns are typical in recovery and testing scenarios for pilots of multiengine aircraft.

Kunat made two unsuccessful attempts to start the engine by diving to make airflow turn the propeller, Valentine told investigators. After that, he decided to divert the aircraft to a gravel airstrip at Glacier Point.

"(Valentine) stated the pilot intended to land at Glacier Point and use a battery booster located in the baggage compartment to start the engine," NTSB staff wrote. "As the airplane approached the airstrip, the pilot made a low-level pass to check the conditions at the airstrip. (Valentine) concluded by stating this was his last memories of the flight."

People familiar with Kunat and the aircraft told the NTSB that the plane's battery performance was degraded, Johnson said, a factor that may have prevented him from restarting the engine.

"There are two things: No. 1, they shut it down intentionally, but No. 2, he had a degraded battery," Johnson said. "If he had a good battery there, he would have been able to get it started."

An examination of the scene by NTSB and Federal Aviation Administration inspectors found "damage consistent with a right-wing-down, nose-down airplane attitude during ground impact."

The aircraft's flaps — typically lowered during landings for additional lift — were up, although their control lever was in the down position.

Investigators were looking into whether the engine shutdown may also have caused a failure of the plane's electrically operated flaps and landing gear, which Kunat would have had to address in-flight.

"It looks like he'd been using (an emergency) handle to pump the gear down," Johnson said.

The plane's wreckage was taken to Gustavus, Johnson said. Piper and engine maker Lycoming were consulting with the FAA and NTSB on the aircraft's emergency procedures, as well as its minimum safe speed in single-engine flight.

Investigators also haven't learned what made Kunat choose to land at Glacier Point rather than the nearby Haines Airport's paved 4,000-foot runway.

"I don't know why he would do that," Johnson said.