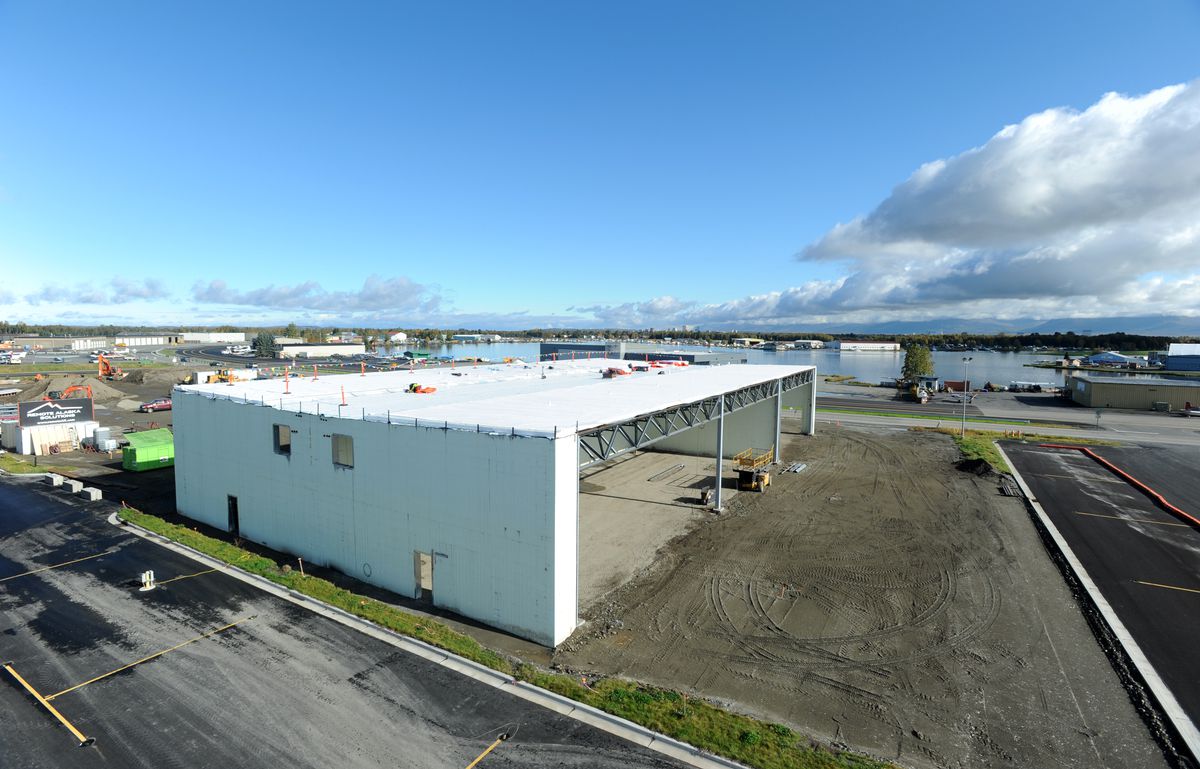 The first of three buildings in the Lake Hood Hangars complex is under construction on Tuesday. (Erik Hill / Alaska Dispatch News)

The first of three buildings in the Lake Hood Hangars complex is under construction on Tuesday. (Erik Hill / Alaska Dispatch News)

A $15 million project underway to build new hangars at the Lake Hood Seaplane Base in Anchorage aims to alleviate the pent-up demand for housing smaller aircraft there.

A company called Lake Hood Hangars broke ground earlier this year on the first of three hangars. The other two are set to be built next year.

Steve Zelener, company owner, said there's huge demand for more hangar space in Alaska's largest city. Proximity to the lake itself also comes at a premium, and the new hangars will have nearby access to the water.

The project also involves doubling the number of floatplane slips Zelener owns on Lake Hood from nine to 18.

The hangars, located on Aircraft Drive near a taxiway, will be about 24,000 square feet each. Taking up a bit more than 3 acres, the first massive building is still under construction, rising about 28 feet high and still without doors.

The rest of the land where the next two buildings will be located is still just dirt.

There were nearly 8,000 registered aircraft in Alaska and around 3,300 of those were registered in Anchorage as of the end of July, said Stormy Jarvis, manager of the hangar project. Most of those in Anchorage are small planes, she said, and that's likely the case for the whole state.

"We see a need, and there's also this waiting list for float slips at the lake," she said. "There's a hangar shortage. That's a resounding message."

Tim Coons, manager at the Lake Hood base, said the waitlist for slips is about 10-11 years old. The base, part of Ted Stevens Anchorage International Airport, has long claimed to be the busiest seaplane base in the world, he said. About 750 people at any given time have permits to park their planes there, he said.

"Most of the area around the lake has already been developed. This was one area that was still open," Coons said. "Alaska has always presented a harsh environment. Just like anybody who would like to have the ability to keep a nice asset inside, airplane owners are no different."

Even smaller planes can cost anywhere from $50,000 for something used, to a few million dollars for something new, said Zelener. Snow, cold and ice, as well as vandalism and other damage, are some of the reasons people want to keep their aircraft indoors.

"Outside elements are going to contribute to wear and tear of an aircraft before it has to be rebuilt," said Seth Kroenke, president of Remote Alaska Solutions, the contractor on the project.

The hangars are designed with energy efficiency in mind, he said, and they use concrete insulated with foam to handle wide-ranging fluctuations in temperature.

The project has been an idea since 2010, Zelener said. He's also the owner of Zelener Group, which has commercial real estate in Anchorage, Nome and Dutch Harbor.