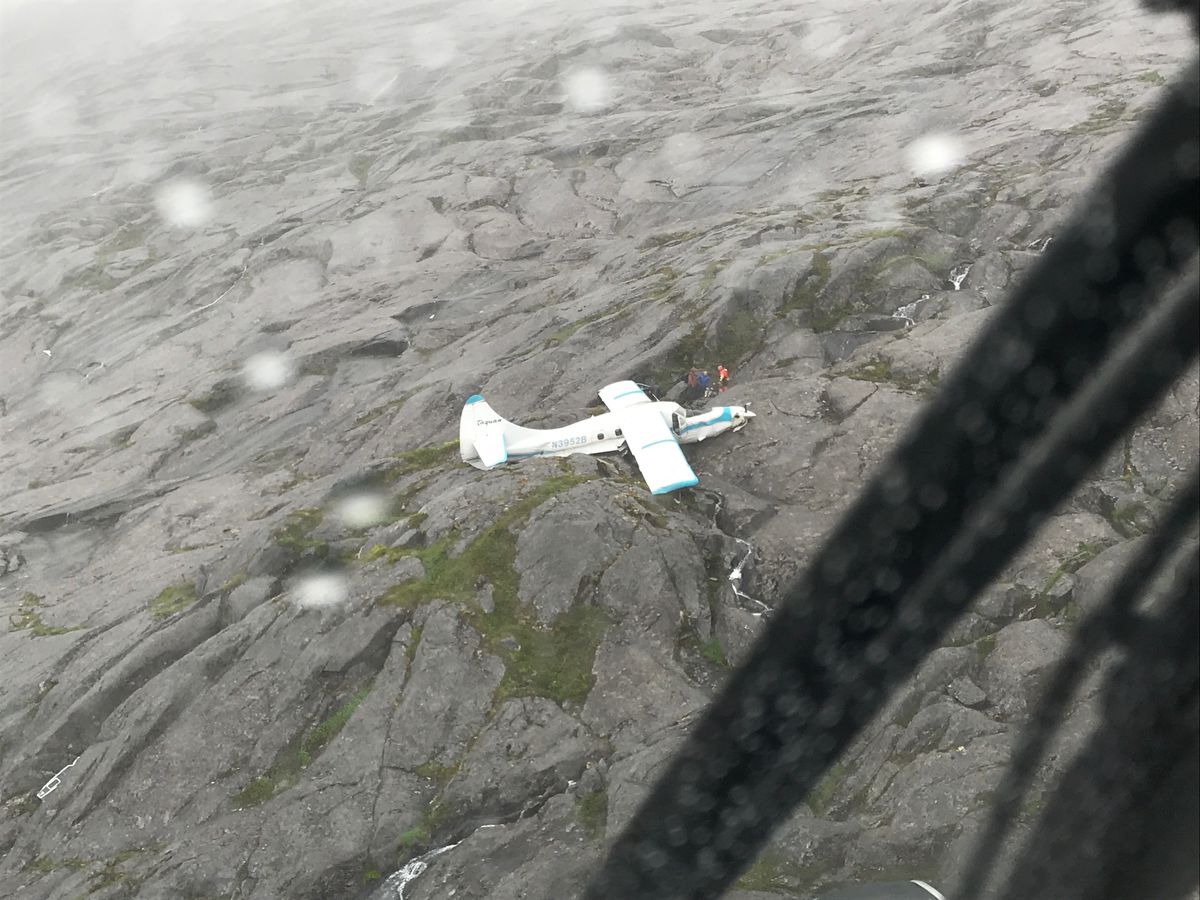 The pilot of a floatplane that crashed Tuesday near Ketchikan told a federal investigator he put the plane into an emergency climb just before it hit the side of a mountain on Prince of Wales Island.

Everyone in the plane survived. Two passengers remained hospitalized Wednesday afternoon, one in Seattle and the other in Ketchikan.

One reportedly suffered a back injury, the other a foot or leg injury, according to preliminary information from investigators.

Pilot Mike Hudgins, 72, was flying a Taquan Air de Havilland Otter from a fishing lodge at Steamboat Bay to Ketchikan when the plane crashed at about 2,000 feet above the West Arm of Cholmondeley Sound, Alaska State Troopers said.

Hudgins told a National Transportation Safety Board investigator he left the lodge around 7:50 a.m., according to Clint Johnson, NTSB's Alaska region chief. He said he encountered ceilings of about 1,100 feet and 3 to 5 miles of visibility.

As Hudgins navigated through mountains between the lodge and Ketchikan, it's likely visibility diminished, Johnson said. The pilot told investigator Brice Banning he saw the side of the mountain rising up ahead of him.

"Once he saw the rising terrain, he tried to do an emergency climb," Johnson said. The plane, slowed by the sudden climb, dropped as the side of the mountain came up.

A photo of the plane at the crash site shows the wings drooping but little front-end damage, as if the Otter hit hard but not nose-first.

Rescuers battling thick clouds got to the plane after more than an hour of searching, hoisted everyone to a sea-level staging area, then flew them back to Ketchikan. None of the injuries were described as life-threatening.

Six of the people involved in the crash were evaluated and released Tuesday at Ketchikan PeaceHealth Medical Center, according to hospital spokeswoman Mischa Chernick.

The pilot was among the plane's occupants released Tuesday.

One was admitted to the hospital in serious condition Tuesday but was upgraded to fair condition Wednesday, Chernick said.

Four passengers — three men and a woman — were transferred to a Seattle hospital, she said.

The woman and two men were discharged Wednesday, according to Susan Gregg, a spokeswoman for Harborview Medical Center.

Another man, however, was admitted to the hospital and in satisfactory condition Wednesday, Gregg said.

It's not yet known what caused the crash.

One passenger on the plane Tuesday posted several updates on Facebook, including one a little more than an hour after the crash that simply read "Prayer request – fog lifts."

Later, the Ketchikan resident thanked the U.S. Coast Guard and many medical providers who helped her. She described needing stitches and pieces of metal removed.

Hudgins was described by his son as a seasoned aviator who enjoys flying visitors around Ketchikan.

Hudgins is a retired U.S. Navy pilot who also flew for Hawaiian Airlines and Japan Airlines before joining Taquan five or six years ago, according to his son, Zack Hudgins, who lives in Seattle.

Mike Hudgins in 2016 rescued a drenched miniature Sheltie named Misty swimming alone in Tongass Narrows off the Taquan Air floatplane dock, according to an account in JDA Journal.

Taquan issued a statement about the pilot Wednesday afternoon: "Our pilot, Mike Hudgins, is a skilled professional with thousands of hours of flying experience in Alaska, and hundreds of hours flying this particular aircraft. We are fortunate to have him as an employee."

A similar 2015 crash of a Promech flightseeing floatplane near Ketchikan killed all nine people aboard.

Investigators described that crash as a "controlled flight into terrain" and said the pilot was flying in marginal weather conditions under visual flight rules when the plane slammed into the side of a mountain.

The NTSB is expected to release a preliminary report on the Taquan crash early next week.