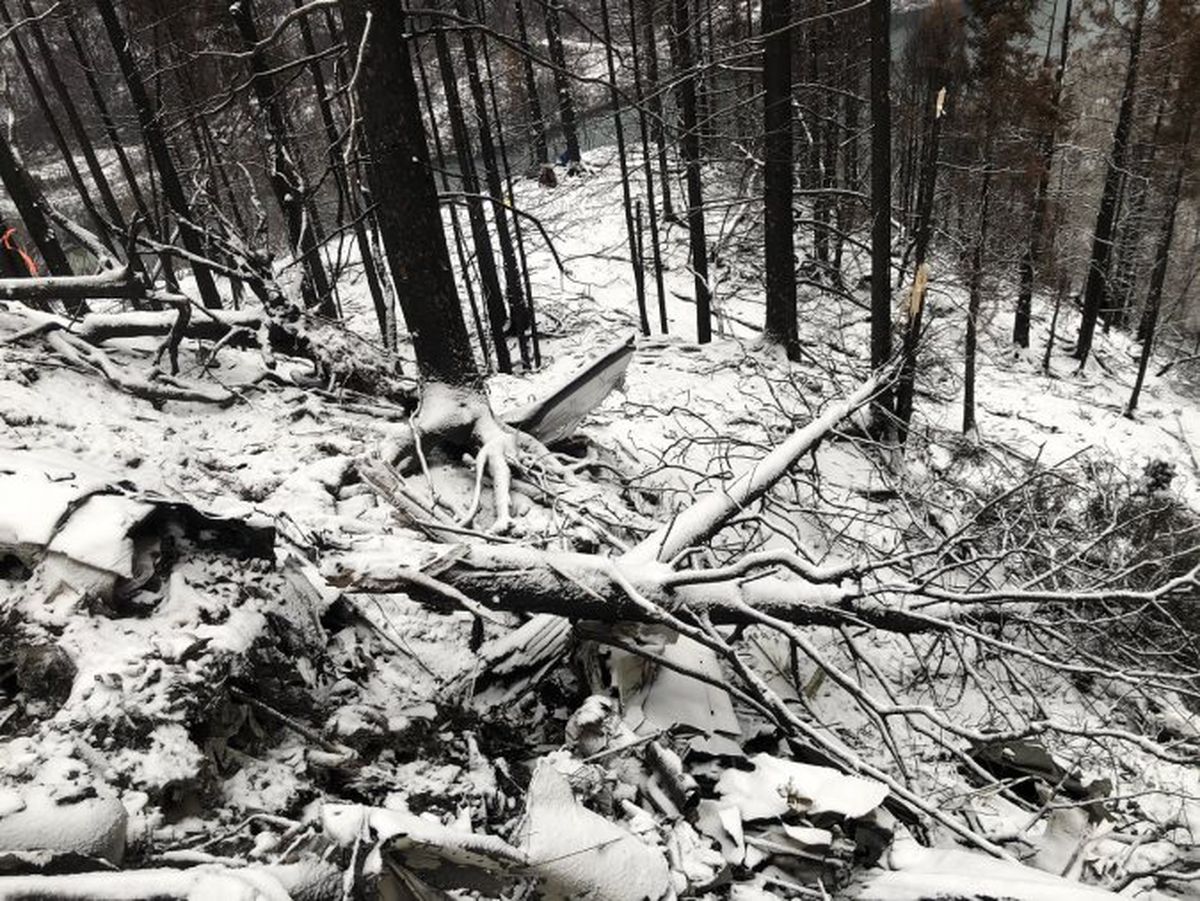 The site of the Nov. 29, 2019, Medevac Alaska plane crash that killed the pilot and two medical personnel. (Courtesy NTSB)

The site of the Nov. 29, 2019, Medevac Alaska plane crash that killed the pilot and two medical personnel. (Courtesy NTSB)

Federal investigators say the crash of an air ambulance late last month occurred at night after two other companies turned down the flight due to weather and limited daylight.

The dispatch officer for Medevac Alaska, the company that provided a paramedic and flight nurse, wasn’t notified of the previous declined flight requests, according to a preliminary report released Wednesday by the National Transportation Safety Board.

Three people died the evening of Nov. 29 when a plane carrying a two-person medical crew crashed above the Sterling Highway on the Kenai Peninsula. The crash occurred about 15 miles west of Quartz Creek Airport.

The twin-engine Piper PA-31 operated by Security Aviation was headed to Seward Airport, where two Medevac Alaska employees planned to pick up a patient from Providence Seward Medical Center before returning to Anchorage.

Drivers on the Sterling Highway near Mile 63 reported seeing the lights of the plane over the highway, the report says. One saw the plane turn in a circle west of the Kenai Mountains as it descended and then entered the valley, lead investigator Noreen Price wrote. “He observed the wings rocking back and forth and while he was looking elsewhere, he heard an explosion and observed a large fire on the mountainside.”

Another witness saw the plane flying low and explode when it hit the mountain, she wrote. Witnesses called 911 “and observed the wreckage high on the mountainside burning for a long time after impact.”

Two other air ambulance services opted against flying to Seward that evening.

Dispatch records indicate Providence Seward Medical Center emergency clinic personnel called multiple air ambulance companies with a “weather check” for possible air ambulance transportation of a patient from Seward to Anchorage, according to the report. The first company contacted was Guardian Flight, which declined the flight at 4:24 p.m. due to limited daylight hours. The second company, LifeMed Alaska, declined the flight at 4:37 p.m. due to weather.

The third and final company contacted for the flight was Medevac Alaska, Price wrote. Their dispatch officer was not notified of the previous declined flight requests and forwarded the request to Security Aviation, the company’s sole air charter provider.

At 5:31 p.m., Security Aviation accepted the flight, which was staffed with a nurse and paramedic. The flight left at about 6:50 p.m., when it was already dark. It crashed just after 7:10 p.m.

A Providence spokesman said hospital officials had yet to see the report and so couldn’t comment right away.

Medevac Alaska doesn’t operate its own aircraft, so the company charters Security aircraft instead. Generally, an aircraft operator makes the ultimate decision whether to accept a flight.

Killed in the crash were pilot Glen Morthorpe, 75, described by a friend as one of Alaska’s “legendary” aviators; paramedic Maddox Burts, 35, who joined the profession after the birth of his daughter; and registered nurse Rob Cartner, who had just celebrated his 53rd birthday, according to reports from his hometown of Concord, North Carolina.

Cartner and Burts worked and lived in Anchorage every other month during their shifts for Medevac Alaska. They were scheduled to return home to their families in the Lower 48 for all of December.

From Anchorage, the air route to Seward is about 86 miles southeast across the Kenai Peninsula and the Kenai Mountains to the coastal town at the north end of a fjord surrounded by mountains ranging from 4,000 to 6,000 feet.

Pilots aren’t allowed to fly into Seward Airport at night under “instrument flight rules" -- navigating only by using instruments in the cockpit, investigators say.

Instead, the report indicates the Security Aviation plane was flying under a visual flight plan -- meaning the pilot needs to be able to see around the aircraft -- and following the mountains and the Sterling Highway.

Federal Aviation Administration data indicates Morthorpe flew south from Anchorage at about 3,000 feet toward the highway, then north of Skilak Lake made a descending right turn to about 2,200 feet before flying into the valley toward Cooper Landing, the report says. The last data point put the plane over the west end of Jean Lake at 2,100 feet at about 140 mph.

Weather at the closest station, the Soldotna Airport about 35 miles to the west, was reporting a 3-knot wind, 10 miles visibility and broken clouds at 8,000 and 9,500 feet, according to the report.

Security issued a statement on Wednesday: “In the days since November 29, we have worked closely with the NTSB, and appreciate the professionalism with which they continue to conduct their investigation. While we have resumed operations, our thoughts and prayers remain with the families and friends of those who made the ultimate sacrifice in an effort to help others.”

Medevac Alaska didn’t immediately respond to a request for comment.