‘Against the odds’: Three safe after medevac plane lands in water during takeoff from Unalaska 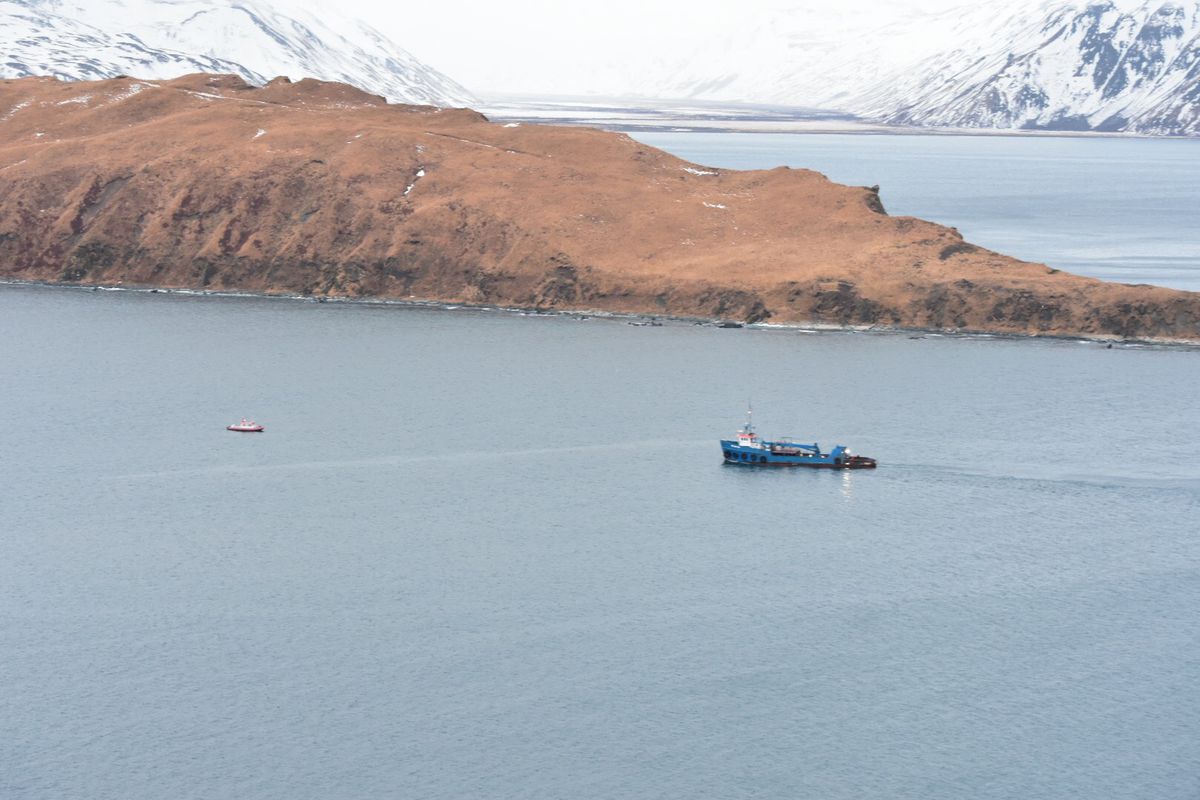 Resolve Marine’s vessel Makushin Bay, right, and the City of Unalaska Ports vessel Tidebreaker on scene of the LifeMed medevac plane crash in the waters of Unalaska Bay on Thursday morning, Jan. 16, 2020. The crew on the vessel Tidewater rescued three people from the Beechcraft King Air 200 turboprop aircraft. (Photo by Megan Dean)

Resolve Marine’s vessel Makushin Bay, right, and the City of Unalaska Ports vessel Tidebreaker on scene of the LifeMed medevac plane crash in the waters of Unalaska Bay on Thursday morning, Jan. 16, 2020. The crew on the vessel Tidewater rescued three people from the Beechcraft King Air 200 turboprop aircraft. (Photo by Megan Dean)

Three people aboard a LifeMed medevac flight were rescued Thursday morning after the plane went into the water during takeoff from the Unalaska airport.

The Beechcraft King Air 200 turboprop, chartered by Aero Air, went down at 8 a.m. in “pitch-black” darkness at the tail end of a harsh Aleutian Islands windstorm, said John Lucking, chief of the Unalaska Police Department.

The weather was misty and overcast at the time, with wind gusts between 14 and 23 mph from the east, according to National Weather Service meteorologist Benjamin Bartos.

LifeMed CEO Russ Edwards said the weather was “nothing unusual for Dutch Harbor this time of year.”

Edwards said plane was believed to be airborne only a “matter of moments” before it crashed about 100 feet offshore in the waters of Unalaska Bay, between the northwest edge of the airport runway and Hog Island.

Edwards said Thursday afternoon that it was unclear what caused the incident.

The plane was taking off to the northwest of the runway, on a flight to pick up a patient in Adak.

Edwards described the event as an emergency water landing.

“While taking off for a routine medical transport this morning, our aircraft experienced an unknown issue which forced an emergency water landing," Edwards said in a statement. “Through skill, training and composure, our pilot and two crew members were able to safely evacuate from the aircraft with minimal injuries.”

A city-owned vessel reached the downed aircraft within 24 minutes. The rescuers picked up all three passengers from a life raft and took them to shore, Lucking said.

The airplane sank into 60 to 100 feet of water, according to a report from the Alaska Department of Environmental Conservation.

The Aero Air pilot and two LifeMed crew members, including a nurse and paramedic, were in good condition and brought to Iliuliuk Family & Health Services Clinic for evaluation, Edwards said.

“They were at the clinic in less than an hour (from the time of the crash), which is remarkable in a rural Alaska water rescue,” Lucking said.

The incident comes less than three months after a PenAir commercial flight crash-landed in Unalaska, skidding off the runway into water and killing one passenger.

Two other medical flights have crashed in Southcentral Alaska within the last few months.

Two Medevac Alaska crew members and a Security Aviation pilot were killed in a Kenai Peninsula crash on Nov. 29. Earlier, two companies had turned down the flight on the day of the crash because of weather concerns.

Less than a month later, a single-engine plane made an emergency landing on a frozen lake east of Koliganek on Christmas Eve. Medevac crew members were returning to Anchorage after transporting a patient to New Stuyahok when the pilot reported engine failure. No one was injured.

“It was the best possible outcome you can have in a situation like that,” Isley said.

“The pilot was able to know it’s important, when it became clear a water landing was imminent, that he was able to get the tail down because in that plane you want to land tail first,” he said.

Pilots with the company are required to have specific experience flying in Alaska, Isley said. He did not disclose how many years of experience the pilot flying the medevac plane had. He said Aero Air has “very stringent requirements for all of the pilots we hire.”

Isley said the LifeMed crew members told him they were thankful the pilot was able to react quickly and land the plane safely.

“This is an against-the-odds type of thing and he should be commended for that,” he said.

LifeMed temporarily suspended its operations Thursday, but Edwards said the services are expected to resume by 8 p.m. Edwards said the company does about 12 to 15 medical flights per month from Unalaska.

LifeMed formed in 2008 as the result of a merger between air ambulance companies Life Guard Alaska and AeroMed, according to their website. It is headquartered in Anchorage with 135 employees spread between bases in Fairbanks, Soldotna, Bethel, Palmer, Dutch Harbor and Juneau.

The Dutch Harbor base was operated seasonally until last year, when Edwards said it became a permanent fixture for LifeMed.

The medical crews rotate to Dutch Harbor from other locations, like Fairbanks and Anchorage, he said. They are stationed there for seven days.

Edwards said Thursday afternoon that a plane was headed to Unalaska to bring the rescued nurse and paramedic home to Anchorage. It’s unclear when LifeMed flight crews will return to Unalaska — Edwards said the company is waiting until “we get things back to normal.”

The crash happened during crabbing season at the country’s largest seafood port by volume.

It’s unclear how much jet fuel spilled into the water, but the state Department of Environmental Conservation report estimates there were 430 to 440 gallons on the plane at takeoff. There was a visible sheen on the water that afternoon.

Isley said Aero Air is working with the National Transportation Safety Board to remove the plane in the next few days.

[Separated families, fishermen with toothaches wait as air service to Unalaska is delayed until next month]