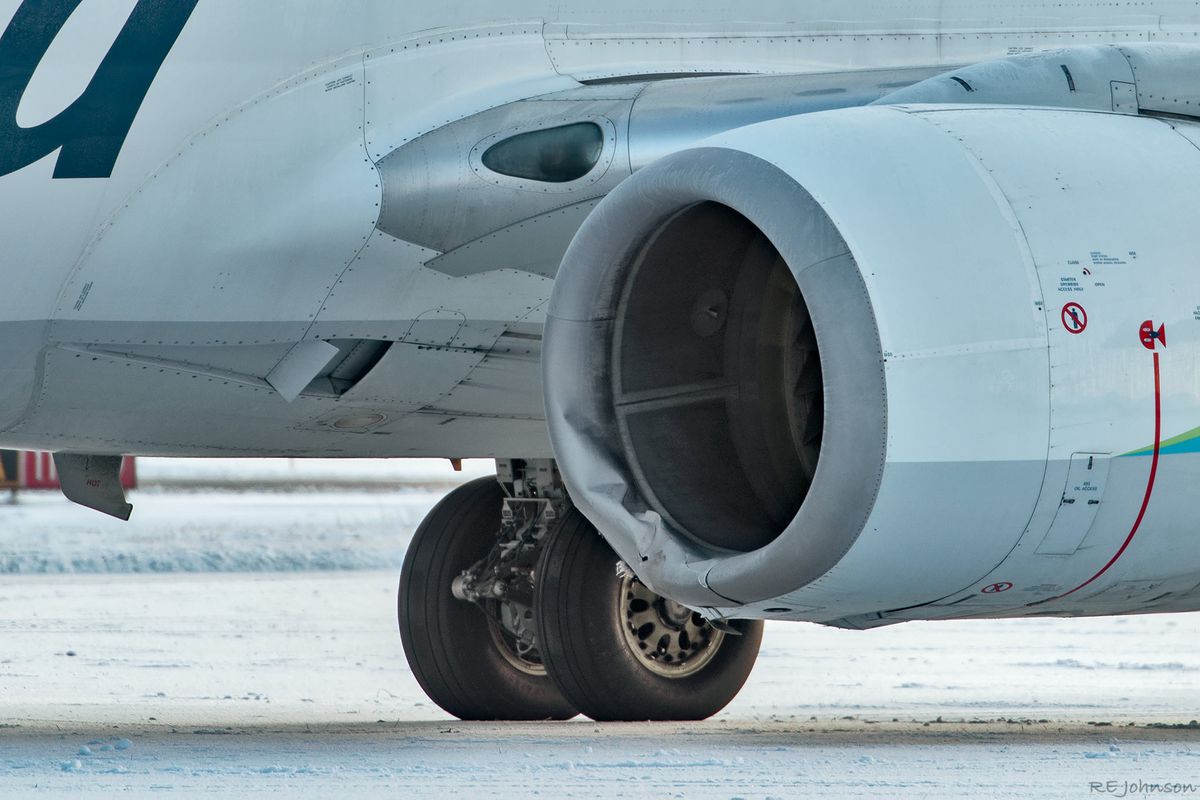 An Alaska Airlines jetliner was damaged when it struck a brown bear on the runway after landing at the Yakutat Airport on Saturday, Nov. 14, 2020. (Photo by R E Johnson)

An Alaska Airlines jetliner was damaged when it struck a brown bear on the runway after landing at the Yakutat Airport on Saturday, Nov. 14, 2020. (Photo by R E Johnson)

An Alaska Airlines jetliner struck a brown bear while landing early Saturday evening in Yakutat, killing the animal and causing some damage to the plane. No one in the plane was hurt.

Airport crew members had cleared the runway about 10 minutes before flight 66 was expected to land, said Sam Dapcevich, a public information officer for the state’s Department of Transportation. The crews did not see any signs of wildlife during the check, but as the plane began to slow after landing, Dapcevich said, the pilots spotted two bears crossing the runway.

“The nose gear missed the bears, but the captain felt an impact on the left side after the bears passed under the plane,” a statement from Alaska Airlines said.

The Boeing 737-700 struck and killed a brown bear sow, but its cub, thought to be roughly 2 years old, was uninjured, Dapcevich said.

The pilots saw the “bear lying about 20 feet off the center of the runway,” as the plane taxied to parking just before 6:30 p.m., according to Alaska Airlines.

None of the passengers or crew members in the plane were injured. It was not immediately clear how many passengers were on the flight. The plane had departed first from Cordova and was scheduled to stop in Juneau next.

Alaska Airlines flight 66 hit and killed a bear while landing here in Yakutat last night. No one on the plane was...

The left engine cowl of the plane was damaged and the plane remained in Yakutat Sunday.

“Our maintenance technicians are working to repair the plane, which will take a couple of days,” the statement from Alaska Airlines said.

Crew members at the Yakutat Airport cleared the bear carcass from the runway, and Dapcevich said officials with the Alaska Department of Fish and Game are expected to collect the remains.

Passengers flying out of Yakutat were picked up by flight 107 Saturday night and flown to Anchorage. Alaska Airlines said they were rebooked on other flights after reaching Anchorage.

The Yakutat Airport is partially enclosed by a fence. Dapcevich said employees undergo annual wildlife hazard training and use pyrotechnics or vehicles to herd animals away from the area when needed. He said it was dark out when the plane landed, and crews followed normal procedure checking the runway Saturday.

In the past, planes have been reported hitting deer, geese, caribou and other animals in Alaska, but Dapcevich said this is the first time he’s heard of a bear being struck by a plane. In 1987, an Alaska Airlines jet was delayed while it was inspected for damage in Yakutat after a bald eagle dropped a salmon from its talons in midair and the fish hit a cockpit window shortly after takeoff from the Juneau airport. ''They found a greasy spot with some scales, but no damage,'' the Juneau airport manager said at the time.

Correction: A previous version of this story said the pilots of flight 66 saw the bears when they approached the runway. In fact, they saw the bears crossing the runway as the plane was slowing down after landing.