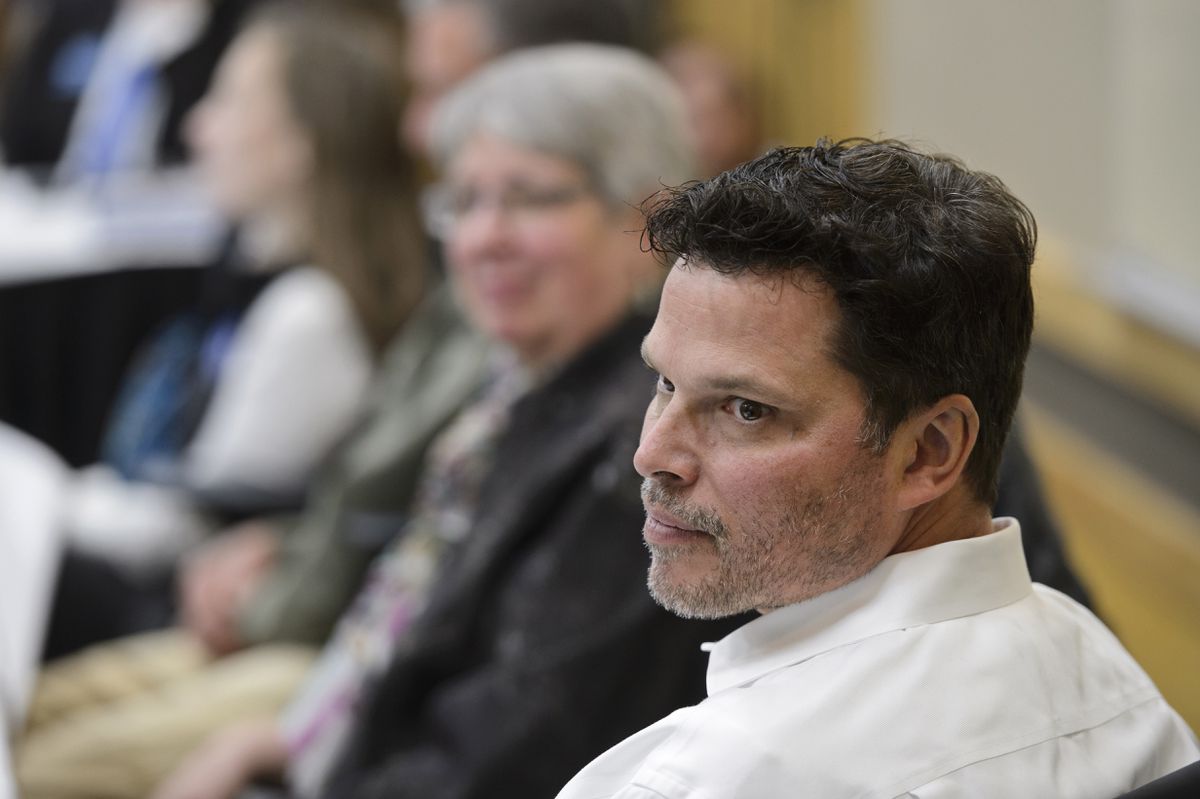 University of Alaska Board of Regents member Andy Teuber listens to a discussion during a meeting at UAA on Sept. 12, 2019, in Anchorage. (Marc Lester/Anchorage Daily News)

University of Alaska Board of Regents member Andy Teuber listens to a discussion during a meeting at UAA on Sept. 12, 2019, in Anchorage. (Marc Lester/Anchorage Daily News)

The head of Alaska’s largest tribal health organization died in a helicopter crash earlier this month as he tried to reach family in Kodiak ahead of a news story detailing allegations of sexual misconduct against him, according to a preliminary report from the National Transportation Safety Board.

Andy Teuber, at 52 one of Alaska’s most prominent executives after more than a decade as president and chairman of the Alaska Native Tribal Health Consortium, is presumed dead in the crash of his Robinson R66 helicopter on March 2 in the Gulf of Alaska.

A pilot for the charter company Teuber owned, Kodiak Helicopters LLC, described him as “distracted” and not acting normally before flying that day, according to the federal report released Tuesday.

The report sheds little light on what caused the crash. But it provides the first official description of how that flight came together. The helicopter company pilot told investigators that Teuber said he was trying to fly from Merrill Field in Anchorage to Kodiak to be with family, the report said.

The story, published later that day by the Anchorage Daily News and ProPublica, detailed allegations of harassment and sexual misconduct made in a Feb. 23 resignation letter to the ANTHC board from a former assistant, Savanah Evans, including accusations he “unrelentingly coerced, forced and required sex” of her.

Teuber abruptly resigned his ANTHC job the same day the letter was shared with the organization’s board.

In the story, Teuber disputed the allegations, telling reporters the two had a “completely consensual personal relationship.”

Aside from his ANTHC position, Teuber served as chief executive of the Kodiak Area Native Association, a regional tribal health provider, and on other boards including the Alaska Federation of Natives and the University of Alaska Board of Regents. Teuber resigned from the AFN and university boards the same day he stepped down from his ANTHC job.

The day of the crash, Teuber contacted a company pilot and told him he needed the R66 for the next few days, the pilot told NTSB investigators. He also told the pilot to cancel any previously scheduled charter flights, the new report says.

Teuber then showed up at Merrill Field and asked the pilot to fill the helicopter’s fuel tank, according to the report.

“He added that he had brief contact with (Teuber) while unloading his personal gear from the helicopter, but that (Teuber) seemed distracted and was not himself,” investigator Eric Swensen wrote. “Just before departure, (Teuber) commented to the Kodiak Helicopters pilot that he wanted to be in Kodiak, and with his family, when a local news story involving him was scheduled to publish.”

Teuber was married in Las Vegas the day before the crash, according to records. Teuber had flown “all night” to get back to Anchorage on March 2, said Clint Johnson, the NTSB’s Alaska chief. His wife told investigators Teuber went directly to Merrill Field after he landed at the Anchorage airport, the report says.

Teuber’s state of mind is among the factors being weighed as federal investigators assess what caused the crash. The NTSB called in a human performance investigator specifically to weigh what if any role that played. Investigators are also looking at weather at the time.

“This is a unique situation,” Johnson said. “Everything that was going on outside of the actual flight down there has bearing on it. The state of mind, the rest, the 72-hour history is very important.”

A review of Federal Aviation Administration data indicated that Teuber didn’t receive any preflight weather briefings or air traffic services, according to the report.

A distinctive yellow float from the helicopter was found in frigid Gulf of Alaska waters a few miles from the wind-scrubbed and uninhabited Barren Islands between the Kenai Peninsula and Kodiak Island.

Other pilots describe the area as notoriously tricky, with turbulence and unpredictable winds.

The helicopter, which carried a real-time tracking system called Spidertracks, issued a last signal about 90 minutes after Teuber left Anchorage at 2:06 p.m.

The Kodiak Helicopters pilot was watching Teuber’s progress using the tracking system when the data stopped in an area south of the Barren Islands over open water, the report says. The last signal came as the helicopter’s track passed between Ushagat Island and West Amatuli Islands about 400 feet over the water and at a groundspeed equivalent of roughly 150 mph.

Then the signal disappeared.

The water in the area is about 300 feet deep.

Once it became clear the helicopter hadn’t arrived in Kodiak, friends and family contacted the FAA and an extensive search was launched.

The floats are designed to be deployed by a pilot in case of emergency, but can also inflate on impact, aviation experts say. The transmitters typically don’t transmit once they’re underwater, but it’s not clear whether that’s what happened in this incident, Johnson said.

“There’s a lot of unknowns,” he said.

Days after the accident, an air charter company based in Kodiak discovered debris on a beach on Afognak Island: parts of the helicopter’s float, landing skid and fuselage structure, according to the report. The debris was found north of Port Lions.

Teuber was paid a salary of more than $1 million a year to oversee the consortium, which describes itself as the largest tribal health organization in the country, serving more than 170,000 Alaska Native people in communities statewide. The consortium, along with other tribal health entities, earned national recognition recently for its fast-paced COVID-19 vaccinations across Alaska.

He held numerous commercial pilot certifications issued in 2015, including single- and multi-engine ratings, according to an FAA database. He also held an instrument rating for airplanes and helicopters, meaning he was authorized to fly in the dark or bad weather relying on his instrument panel instead of his vision. He was a certificated airframe and power plant mechanic.

The NTSB expects to release a final report on the crash within the next 12 months.