NTSB: Heli-ski pilot was maneuvering over a Chugach mountain ridge just before crash that killed 5 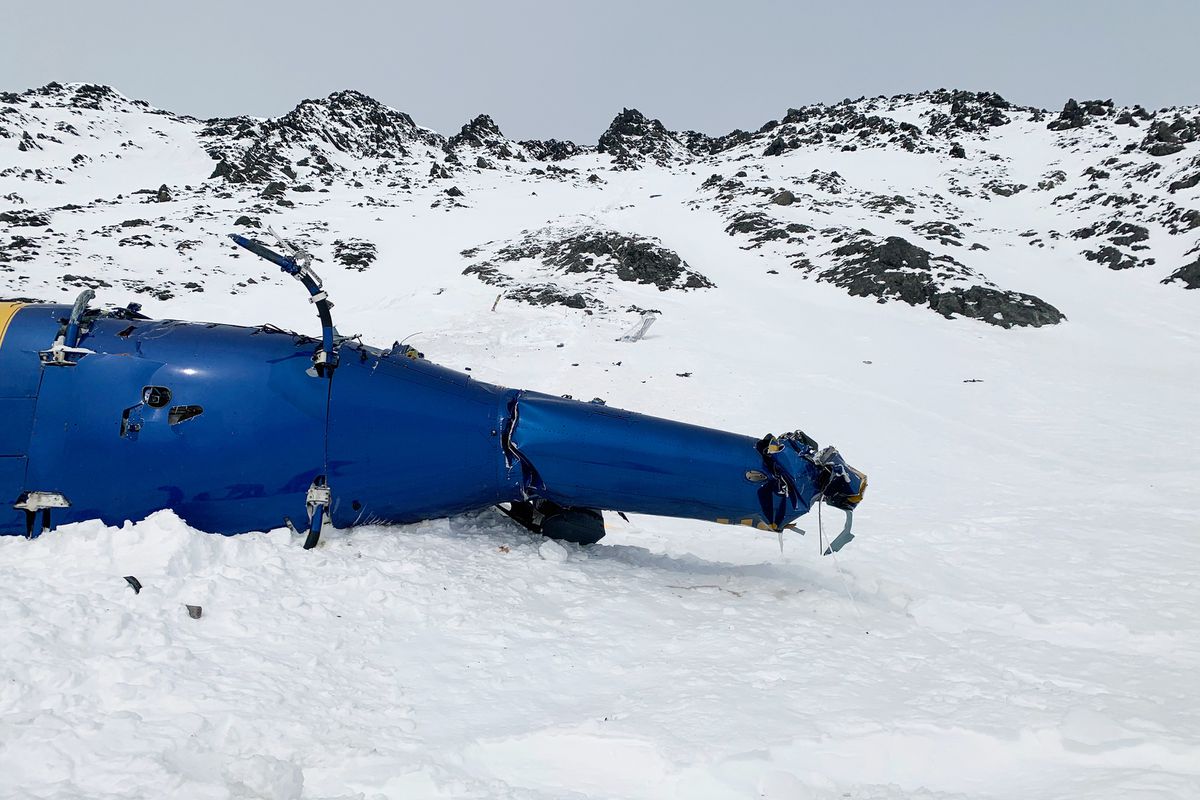 The pilot of a helicopter that crashed last month in the Chugach Mountains, killing five people and leaving one survivor, was maneuvering over a ridge for several minutes before impact, according to the first report on the accident by federal investigators.

The men were on a half-day heli-ski trip in the backcountry above Knik Glacier, authorities say.

A data track from the helicopter indicates that the group had already taken off and landed in the mountains near the glacier several times, and may have been looking for a spot to set down.

The crash of the Airbus AS350B3 about 21 miles southeast of Palmer killed the Soloy Helicopters pilot, two highly respected guides and two Europeans, including a billionaire considered one of the wealthiest men in Europe.

A lone survivor waited for hours for rescue inside the snow-filled helicopter.

The National Transportation Safety Board preliminary report released Tuesday provides no insight into what may have caused the March 27 crash. Any finding will take months as investigators piece together information from interviews, data recorders and wreckage.

Instead, it summarizes what investigators know so far: The group took off from a rental house on Wasilla Lake. The trip was booked through Tordrillo Mountain Lodge but the group hadn’t yet arrived there, lodge representatives have said.

The helicopter was flying multiple legs for several hours that Saturday afternoon, typical for a heli-ski trip with numerous runs.

Around 6:27 p.m., the helicopter flew northwest and climbed to about 5,900 feet before beginning what would be its final movements five minutes later, according to the report written by NTSB investigator Joshua Cawthra.

The pilot and five passengers were over a ridge at 6,266 feet.

“The helicopter maintained a low altitude and groundspeed as it maneuvered over the ridgeline for the next few minutes,” Cawthra wrote. The report does not specifically say why the pilot chose that pattern.

The helicopter crashed 15 to 20 feet below the top of a ridge and rolled downhill, investigators say. The debris field extended 900 feet down from the ridgeline. The main wreckage came to a rest at the bottom of a steep slope.

The weather at Palmer airport about 23 miles from the crash site was reported as clear, with 10 miles of visibility and low winds, according to the report.

The helicopter wasn’t reported missing until 8 p.m. by Soloy. It’s still not clear why it took so long for anyone to realize the helicopter’s data track had stopped, or why an emergency locator device didn’t trigger.

Soloy told investigators the company reported the helicopter overdue when it didn’t return at 8 p.m. as expected, according to the report. The wreckage was found by another helicopter pilot at about 9:30 p.m., when the rescue was initiated.

Killed were 33-year-old pilot Zachary Russell, of Anchorage; guides Greg Harms, 52, of Colorado, and Sean McManamy, 38, of Girdwood; experienced snowboarder Benjamin Larochaix, 50, of France; and Petr Kellner, 56, a billionaire entrepreneur who was the richest man in the Czech Republic.

Investigators were able to speak with Horváth before he left Anchorage last week, according to Clint Johnson, Alaska chief for the NTSB. He provided “valuable information,” Johnson said.

Czech media last week quoted a representative of Horváth’s who told them the survivor reported no mechanical problems with the helicopter before the crash.

One of the directors of the PPF Group owned by Kellner told public broadcaster Czech Radio that based on a conversation with Horváth, “nothing indicates a technical defect and that it was really a coincidence of unfortunate circumstances, weather conditions and landing condition.”

The preliminary NTSB report did not provide any specifics as to what may have happened just before the crash.

A team from agency headquarters in Washington, D.C., is finished with the first round of interviews but will return to Alaska in several weeks, Johnson said.

The investigation is expected to involve additional interviews with Horváth, any information taken from the helicopter’s recorders, as well as mechanical information gleaned from the wreckage.

A final report isn’t expected until next year.

The crash marks the deadliest heli-skiing aviation accident in North American history, according to Outside Magazine. Despite the risks inherent in the sport in Alaska, fatal crashes are rare here and in the Lower 48.

The last multifatality heli-ski crash in the United States occurred in 1994 in Nevada, according to the magazine. That accident, the result of a mechanical failure, killed four people, including the president and chief operating officer of Disney. The year before, an accident outside Aspen, Colorado, killed three and was also found to be the result of a mechanical failure.

Harms, one of the guides who died in the Alaska crash, survived a fatal heli-ski crash in the mid-1990s in the mountains of Chile that killed two others.

Kellner’s memorial was held in Prague on Sunday, according to Czech media.