Anchorage is on track to break the record for most homicides in one year. What's going on? 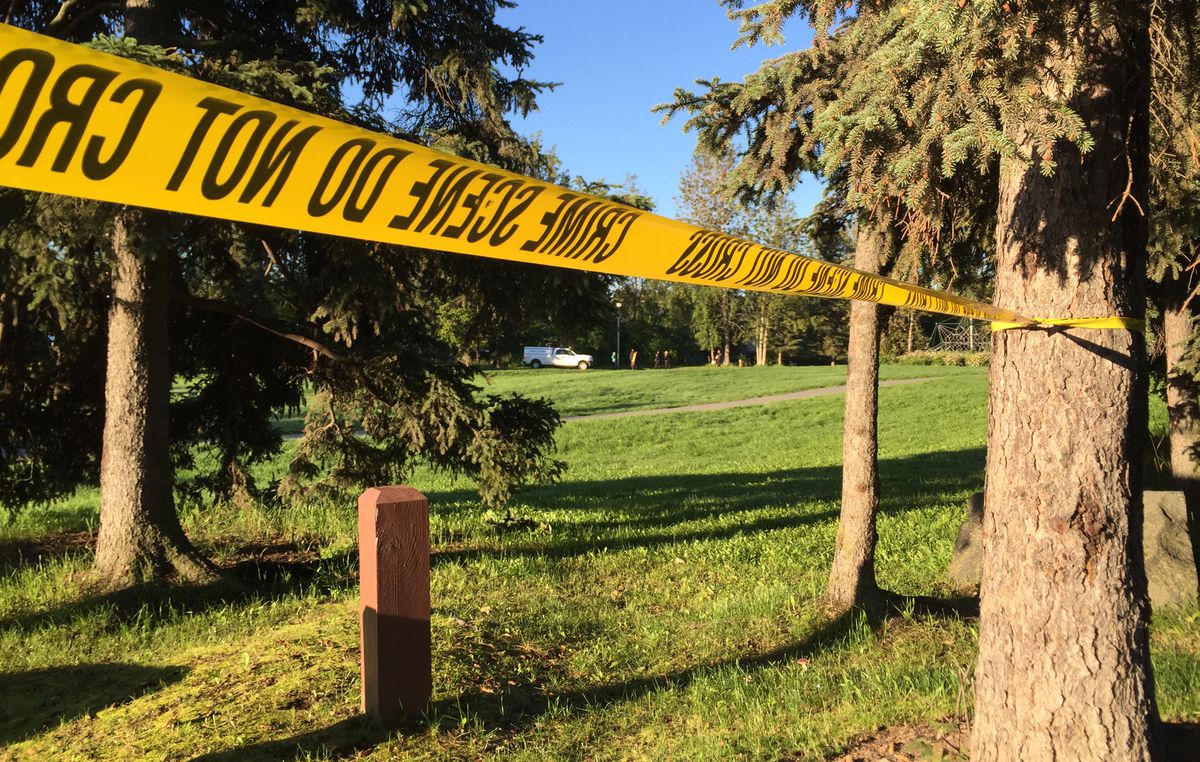 The turning point seemed to come last Sunday morning, when Anchorage awoke to the news of two bodies found at a well-loved, much-used park in the heart of the city.

The people killed at Valley of the Moon park turned out to be Bryant "Brie" DeHusson, 25, and Kevin Turner, 34.

Such news is becoming a grim routine.

DeHusson and Turner were victims Nos. 24 and 25 in a year now on track to surpass Anchorage's previous annual record for most homicides.

In July alone, nine people were killed in the city.

The killings at Valley of the Moon park were especially jarring for many. The park, along the busy Chester Creek trail and adjacent to residential neighborhoods, is the kind of place where children have birthday parties, people hold daylong barbecues and people bring their pets to a fenced dog park.

Sgt. Slawomir Markiewicz, the detective in charge of the Anchorage Police Department's homicide unit, noted he often rides his bike on the same Chester Creek trail.

The FBI is now "assisting local police in investigating recent homicides in Anchorage," according to agency spokesperson Staci Feger-Pellessier. She deferred questions about why the FBI was now involved to Anchorage police.

City officials said more resources are being devoted to public safety. The public will "see officers on bikes and trails and on neighborhood patrols," said Anchorage Mayor Ethan Berkowitz in an email Wednesday.

"But we need to be extra aware of our surroundings and keep an eye out for one another," he said.

With relatively little case-specific information being released by a police department that is still actively investigating nearly half of the year's slayings, the unease felt by residents of Alaska's largest city has congealed into a single question repeated in online message boards, around dinner tables and in workplaces across the city: What's going on here?

The answer is complicated.

It used to be that Anchorage reliably saw between a dozen and two dozen deaths attributable to homicidal violence each year.

"The homicide rate in Anchorage has always run between 12 and 24," said Mark Mew, who served as Anchorage's police chief from 2010 to 2015. "That was sort of the rule of thumb. We rarely did better than 12. And we rarely did worse than twice that."

[In letter, Valley of the Moon residents plead for more police patrols]

But there have been striking peaks and valleys: After a long run of years in the late 1980s during which there were no more than 15 homicides, the early and mid-1990s saw a dramatic increase.

In 1995, some 29 people were victims of homicides in Anchorage — at a time when the city had about 50,000 fewer residents than today.

Police attributed the bloodshed to gangs and drugs sowing violence.

At the time, Anchorage's homicide rate — the number per 100,000 residents — topped Seattle and Portland, according to the article.

The mid-1990s increase in homicides mirrored a broader national trend. Violent crime in America reached its peak in the mid-1990s, said Troy Payne, an assistant professor at UAA's Justice Center.

Then, around 1998, homicide rates again began falling in Anchorage and elsewhere. Criminologists are still trying to figure out exactly why.

"There's a lot of argument about why that happened," said Payne. "In most parts of the country, crime rates fell for both property crime and violent crime like homicides from the late 1990s all the way to the last year or two."

Anchorage's annual homicide totals ran in the teens from 1998 until 2007, when the number jumped to 22, according to FBI data.

The rise in 2007 has been attributed to a retaliatory war between different gang factions in the city. It quickly leveled out, falling to 10 deaths in 2008 and staying in the low teens.

Then last year, the number spiked again, with 25 homicides, according to the police department.

Anchorage is again not alone in the rising violence. Homicide rates are creeping upward and in some cases skyrocketing in some cities, noted Payne, the UAA criminologist.

In an interview last month, Berkowitz said "national trends" could be at play in what's happening in Anchorage.

"There's been a  little bit of escalating violence across the country," he said.

There's no one easy answer why. Some theories include ease of access to weapons and the comeback of some kinds of hard drugs and resulting instability in illicit drug markets, Payne said. The drivers vary by geography too: Battles for drug markets in one area, crushing poverty in another, lack of faith in the criminal justice system in another.

In Anchorage? Way too early to say why. Payne says that while every homicide is a tragedy, Anchorage still has a relatively small number of them — which makes it hard to make generalizations about what's driving them.

"It makes it a really complex question," Payne said. "We seek singular causation — OK, what's the answer? And the truth is probably there's a constellation of answers."

A city data analyst is working on modeling that will help make choices about where to best deploy public safety resources, Berkowitz said.

What's clear is that 2016 cemented the rising trend, with 25 homicides and four months left to go in the year.

The summer has been especially violent.

Anchorage's raw number of homicides at of the end of July put it in the neighborhood of metropolitan police departments such as Denver (19 homicides) and Oklahoma City (20), according to the midyear violent crime survey from the Major Cities Chiefs Police Association, a consortium of urban law enforcement agencies.

The survey's data runs through July 29, when Anchorage had recorded 18 homicides and the Seattle Police Department just 12.

APD's Castro cautioned that some metro police departments in big cities may exclude suburban or exurban areas where lots of crime happens, and may represent a much smaller population.

Breaking down this year

Most of the local homicides of 2016 where details have been disclosed to the public fall into those categories:

There was Loren Douglas, killed while trying to rob a home in the Jewel Lake area; Aaron Syvinski, shot in a fight at an apartment complex in East Anchorage; Pang Xiong, shot in the doorway of her Mountian View apartment by her partner in what police called a murder-suicide; Brandon Merritt, killed outside a gas station in South Anchorage when an argument escalated to gunfire; Linda Skeek was missing for three weeks when her husband was charged in her death. Her body has not been found.

The youngest victim this year is Amigale Alexie, 4 months old, whose mother stands accused of suffocating her with a knit hat.

At the end of July, four teenagers were killed in just over a week. Police have not publicly disclosed whether their deaths were connected.

But in court filings in a separate case, a young woman who said she was kidnapped by two older men reported that the deaths of  at least three of the victims — Xeryus "Iggy" Tate, 17; Chaduer Chuol, 19; and Elijah Zeller, 18 — were connected to ongoing gang retaliatory attacks.

APD Chief Chris Tolley said in an interview in August that police hadn't mentioned potential gang connections in statements due to concerns about their accuracy.

"Quite frankly, you don't want to put out information that hasn't been verified," Tolley said.

Tolley said Anchorage has been fortunate not to see "full-blown gang activity" like Los Angeles or New York.

"That doesn't mean gang activity doesn't touch our city — it does," Tolley said. "Some (gang members) are transplants from other cities, and they bring that bad activity with them."

Tolley said he didn't think crime in Anchorage was being committed "to carry out the mission or direction" of those gangs. More often, he said, a suspect in a crime simply claims affiliation with a gang.

"Gangs in Anchorage aren't what you typically see in a large city, where they take over a block or a neighborhood or so on," Tolley said. "Someone is more than likely going down to one of these Lower 48 cities, meeting with gang members and getting drugs from them."

Some of the 25 homicides don't fall into easily defined categories — and remain unsolved.

The circumstances of three unsolved double homicides — one at Point Woronzof beach in January, one on the Ship Creek bike trail in July and one at Valley of the Moon park on Sunday — have not been explained.

In each case two bodies were discovered on a lonely trail or park during the early hours of the morning. And in all the cases it has been unclear how the two victims knew each other, or what they were doing together at the time of their deaths. Police have been careful not to release details, saying they need to preserve ongoing investigations.

But, Castro said Tuesday, some of the slayings didn't have an obvious motive.

The cluster of unsolved killings connected to trails or parks led the department to issue a blanket warning advising people not to "travel alone at night" in "isolated places."

Former Chief Mew says he has no special insider knowledge of what led to the decision. But he didn't remember a warning like it during his tenure with the department.

"I don't think I recall one quite that broad," he said.

It's not a decision that would have been made lightly, Mew said.

Is there, as more than a few people have publicly asked, a serial killer at work?

The police department says it will not speculate.

And law enforcement officials have emphasized that truly random attacks are extraordinarily rare, pointing out victims in at least six recent cases were "involved in high risk behaviors and/or lifestyles."

It's true, said Payne, the UAA professor: Anchorage residents are statistically much more likely to be victimized at the hands of someone they know than a stranger.

But the idea that danger lurks at the hands of a stranger captures the public's imagination every time, Payne says.

"We fixate on stranger crimes, which are rare, because those are the ones we can more easily think about. It's easier for us to imagine that horrible things are done by people we don't know and don't love."

The killings have even hit close to home for the mayor.

He lives on the same West Anchorage street of well-tended homes where prosecutors say Jacqueline Goodwin was asphyxiated, tortured, sexually assaulted and shot  June 27 in the basement of a home owned by the grandmother of the man charged with her killing.

Goodwin's death was "horrifying" to learn about, Berkowitz said.

It was also a reminder that no part of the city is insulated from violence, he wrote in an email.

"Every time we look at that house, we think of the terrible thing that happened."