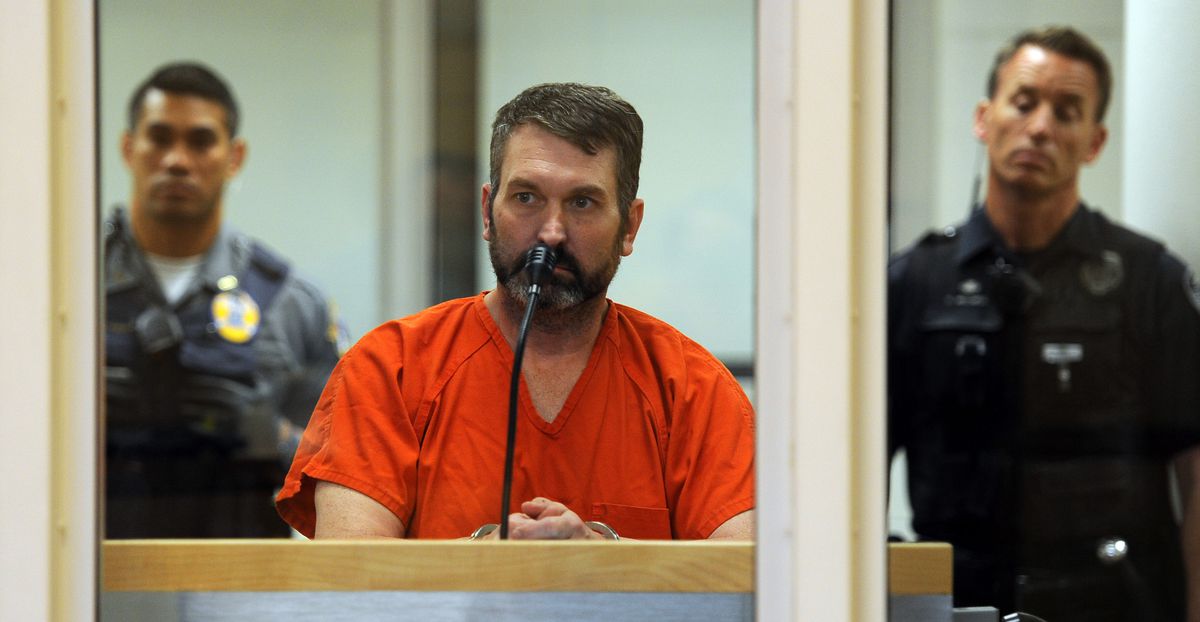 Anchorage police on Wednesday identified the victims of Tuesday's triple homicide at The Bullion Brothers shop in Spenard and said a man has been charged with murder.

Anthony M. Pisano, 43, started a fight with the shop co-owner, 31-year-old Steven Cook, for "unknown reasons," according to a statement released by Anchorage Police Department spokesperson MJ Thim on Wednesday. Pisano then pulled out a gun and shot Cook multiple times, the statement says.

Pisano, a former Army paratrooper at Joint Base Elmendorf-Richardson, has no criminal history on record. He made an initial court appearance Wednesday afternoon but did not enter a plea.

Hartman and McCreadie lived in the apartments and were responding to the commotion after Cook had been shot, the documents said.

[Anchorage mayor apologizes for remark about city's safety after shooting]

Officers received a call about the shooting shortly before 10 a.m. Tuesday.

Upon arrival, police found McCreadie and Cook already dead. Hartman, who later died at a local hospital, was found severely wounded in the front entryway.

A witness said he was talking with Cook when Pisano "pushed him aside and started to fight with (Cook)" in the shop, the documents show, based on an affidavit by Anchorage Detective David Cordie.

The witness wrestled the gun from Pisano, ran out of the business with it, and called 911. The witness said that when he left the shop, Cook had a handgun holstered to his body, according to the documents.

When police arrived, they found an empty holster on Cook's hip but did not find Cook's gun. The witness assumed Pisano grabbed Cook's gun and used it to continue the shooting, the documents say.

Morgan McCreadie, 26, said his family helps manage the building and he was staying in an upstairs apartment while remodeling it. He was visiting his brother, Daniel, in his downstairs apartment, when they heard several shots.

Daniel ran to the door with a handgun and told Morgan to grab one from the upstairs apartment, Morgan said in an interview Wednesday.

When Morgan McCreadie returned with the handgun about 30 seconds later, the three men had been shot.

"He was the kindest guy there is," Morgan McCreadie said of his brother.

Morgan McCreadie said the wounds to his older brother and Cook were so bad it was immediately obvious they would not live. He tried to stop Hartman from bleeding, and moved him to help stabilize him until police arrived.

"It all took place in about two minutes," Morgan McCreadie said of the shooting.

Pisano called police shortly after the incident. He said "he got involved in something and it got really bad," the documents say. Pisano said he does security for the shop.

[Family says Spenard paint shop co-owner, whose death is being investigated as a homicide, had deep roots in Alaska]

The charging documents say Pisano told police that Cook and Bullion Brothers co-owner Michael DuPree were "getting into it and a shootout occurred." Pisano said he left the business as the shooting was "going down."

Later, after asking to speak with a lawyer, Pisano told an officer: "It was in self-defense," according to the documents. It was unclear what he was referring to.

A video surveillance system at The Bullion Brothers, seized by police, stops recording about 40 minutes before the shooting. Cybercrime detectives are continuing to analyze the system's contents, the documents said.

According to state records, Steven Cook and Michael DuPree co-owned The Bullion Brothers shop. Its business license dates back to 2015. DuPree could not be reached for comment Wednesday.

Dan Clark, owner of Southside Trade and Loan, said he remembered when Cook and DuPree came into his shop a few years ago and asked for advice about opening a business. They were both smart, young and ambitious. They brought with them stacks of papers outlining their business plan, he said.

When Cook and DuPree opened The Bullion Brothers, Clark said, he tried to send them customers.

He remembered a time when many of those customers went to The Bullion Brothers and did business there. Cook then came to Clark's shop and offered him half of their profit from that day, Clark said. Just last week Clark said he sent a customer to the Spenard shop and then Cook called to thank him.

That's just the kind of guy Cook was, he said. Cook's death, he said, was a blow to the community.

"He was a great guy. He didn't deserve to go like that," Clark said. "It's just heartbreaking, man. It makes me sick."

Paul Berger, a local businessman, said he last talked to DuPree and Cook about a month ago and they were "enthusiastic and excited about the future." The men worked long hours, he said, and talked about how they could build the business.

"He was just a well-rounded, good man," Berger said. "He knew spot prices, margins. He was very, very sharp."

Daniel McCreadie had lived in the Spenard apartment with his daughter for about a year. He put his daughter on the school bus that Tuesday morning, not very long before the gunfire broke out, Rich McCreadie said. He said his son had big dreams and always had a smile on his face.

"Everybody loved my son," he said. "We all loved him dearly."

Rich McCreadie said Kenneth Hartman was a longtime family friend. They met in Cordova when Hartman drove a taxi and McCreadie worked at a logging company, he said. He said Hartman had rented an apartment in the Spenard building for about eight months.

About all three men killed Tuesday, he said, "all of them were just beautiful people."

An Army veteran accused of murder

Rich McCreadie came face to face with the man accused of killing his son Daniel for the first time Wednesday afternoon.

In a courtroom at the Anchorage jail, McCreadie stood up and told the judge that he would like Pisano "prosecuted to the fullest extent of the law."

"Daniel was my son," he told Judge Leslie Dickson. "He was a super son, a single dad, and that man right there took his life."

Pisano also stood in the courtroom, behind glass with his wrists handcuffed and hands clasped on a podium. He wore a wedding ring and an orange prison jumpsuit. He said little during the brief hearing, answering "No, ma'am" and "Yes, ma'am" to the questions asked by the judge.

Pisano told the judge that he did not work and just retired from the military. He said he had no property and no savings. He was appointed a public defender. Dickson set his bail at $500,000 and his next court date for Sept. 19.

For each murder charge, she told him, he faced between 30 years and 99 years in prison.

By Wednesday evening, Pisano remained at the Anchorage jail. His wife could not be reached for comment.

It's still unclear exactly why Pisano was in the shop Tuesday morning and what led to the alleged fight.

Rich McCreadie said he had never seen Pisano until Wednesday afternoon in the courtroom. Both Berger and Clark said they had never heard his name before.

According to a U.S. Army spokesman, Pisano was a paratrooper at Joint Base Elmendorf-Richardson in Anchorage until July 31.

Pennell said he did not know any more about Pisano's military service Wednesday. Since Pisano was no longer an active member of the military, his records were not immediately available, Pennell said.

According to public records, the owner of H&G Tactical Solutions LLC in Anchorage was listed as a 43-year-old Anthony Michael Pisano — the same name and age as the accused. The Anchorage business provides firearms instruction and tactical training at a private training complex in Anchorage, according to business records.

The business's Facebook page Wednesday morning featured multiple photos of tactical weapons and people doing target training. The page was taken down by the evening.

No one answered the phone at the business Wednesday.

Correction: An earlier version of this story listed an incorrect age for Kenneth Hartman.