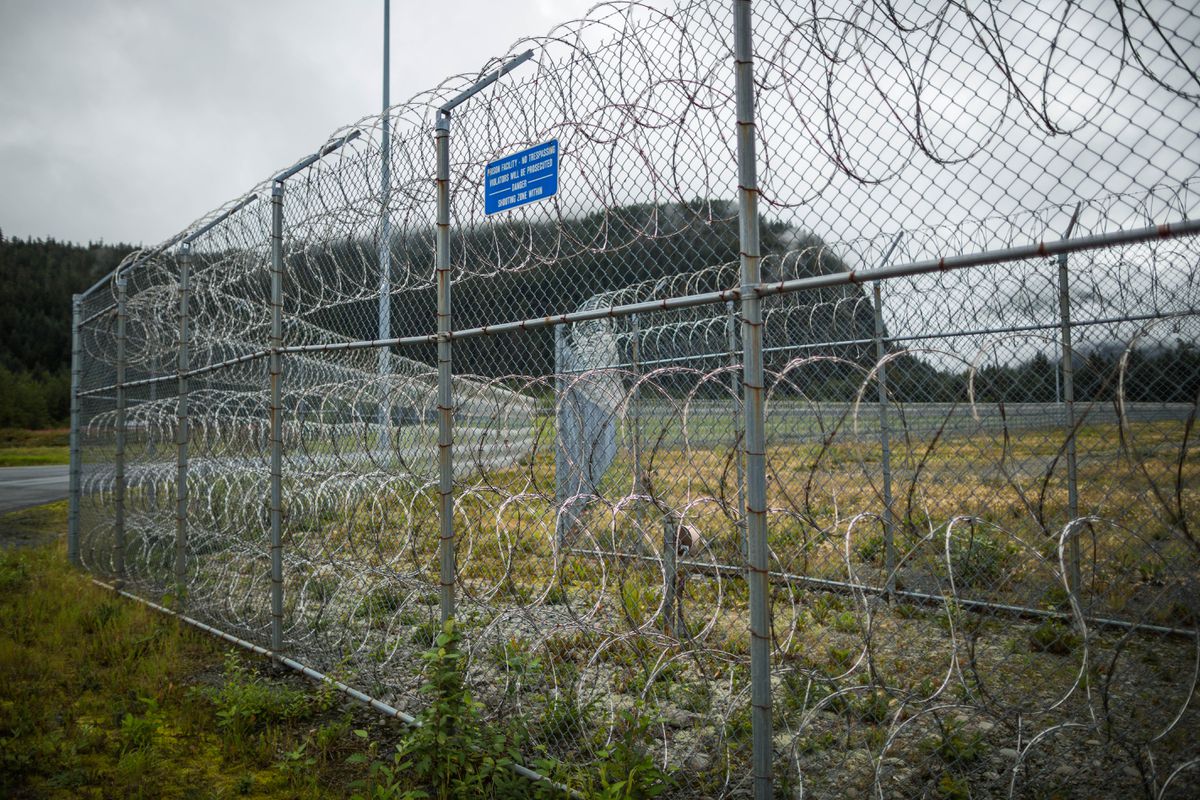 If you live in Alaska, you've probably heard of Senate Bill 91, or SB 91, the state's contentious criminal justice reform bill that began taking effect last year. It's frequently invoked at community meetings and on social media and neighborhood message boards when people voice frustrations about crime.

The law, and whether to amend it or repeal it or leave it alone, is on the agenda for the Legislature's special session that began Monday in Juneau.

This is an attempt to cover some key aspects of SB 91 and answer basic questions.

What is SB 91 and why do I keep hearing about it?

SB 91 is shorthand for Senate Bill 91, a criminal justice reform bill signed into law by Gov. Bill Walker on July 11, 2016. It was a huge bill, more than 120 pages in length. It relied heavily on research and data conducted by the Alaska Criminal Justice Commission and Pew Charitable Trusts.

The new law is interconnected with crime and punishment, and by extension, public safety, a primary concern for politicians and people who live in Alaska.

What is it supposed to do?

In broad terms, SB 91 is supposed to reduce the number of people in prison and cut correctional costs without compromising public safety.

What are the major changes?

SB 91 touched all aspects of criminal justice in Alaska, from the moment a person is arrested to the period following their release from jail.

Perhaps the most changes with the most impact relate to the use of jail as punishment after a conviction. Except for homicide or sex offenses, SB 91 took away or reduced jail as a penalty for the most common crimes, with the aim of focusing prison beds on more violent offenders.

SB 91 also affects people who have been charged but not convicted of a crime. First, the bill paved the way for the state to create a tool to assess a person's risk of not showing up for a court date or committing a new crime. That information will go to judges making decisions about bail.

The state is also hiring dozens of new probation officers to monitor what's known as "pretrial" inmates who might be out of jail before a court date. This unit, called "pretrial services," is new for Alaska.

Finally, SB 91 affected parole and probation, the period of supervision for a person who was convicted of a crime but released from prison. For example, a person who gets out early on good behavior can also cut their time on probation, if they stay out of trouble. The law orders prompt hearings for prisoners who are eligible for parole.

Have other states tried this type of thing? How is it working out for them?

The first to adopt similar reforms was Texas, in 2007. Since then, more than 30 states have followed suit.

Research by the Pew Charitable Trusts highlighted Texas, South Carolina, North Carolina, Kentucky, Georgia and South Dakota as states that have reported simultaneous declines in crime and incarceration rates since adopting the reforms.

California enacted reforms in 2011 and 2014 to reclassify drug crimes and send some prisoners to lower-security jails. This year, some have been pointing to the reforms as a driver behind a three-year spike in violent and property crime.

What is the timeline for SB 91?

SB 91 is unfolding in phases. Here are three dates to know:

• Jan. 1, 2018: The new program to aid decisions about bail and pre-trial release takes effect, as well as supervision for people who are released before trial.

Has the inmate population gone down?

Since SB 91 started taking effect in July 2016, the daily number of inmates is down by about 430 on average, according to the DOC. That's a decrease of about 7 percent.

It isn't clear how much of that change can be attributed to SB 91. The state has cut funding for prosecutors and law enforcement, said Susanne DiPietro, the executive director of the Alaska Judicial Council, which staffs the state's criminal justice commission. Corrections officials have also shifted policies on sending inmates to halfway houses instead of jail.

It also continues a trend. Roughly 1,000 fewer people sit in Alaska prisons today than in July 2014, a drop of nearly 20 percent, according to DOC data.

I heard police are arresting people and then have to let them walk free. Is that because of SB 91?

Not directly. A suspect's release before appearing in court has to do with what's known as the "bail schedule." The bail schedule was not part of SB 91, though it appears to reflect the intent of criminal justice reform and some novel research on state bail practices. It is set by Alaska's four presiding judges and establishes the amount and circumstances under which a person who is arrested without a warrant can be released from jail before a trial.

In early 2016, the presiding judges changed the schedule to standardize bail statewide. It doesn't apply to felonies, or assault or domestic violence.

But for most lower-level misdemeanor crimes — which includes the most common crimes, such as shoplifting and petty theft — the bail schedule directs judges to release defendants without posting bail. That said, an arresting officer can contact the courts to ask a judge to set bail.

Nothing in SB 91 stops a cop from handcuffing a person charged with a crime and taking them to jail. What happens next in the bail schedule may influence that decision, however.

Does SB 91 mean that people aren't going to go to jail anymore?

Fewer people are being put in jail for non-violent and first-time offenses. People are also less likely to go to jail while awaiting trial on criminal charges.

SB 91 reclassified some misdemeanors as violations, like a traffic ticket, where jail isn't possible. That includes missing a court date or using drugs when a judge ordered you not to.

Repeat criminals and violent offenders, such as people who shoot at police officers, can get jail time. People convicted of homicide can get more jail time than before SB 91. Sentences for sex offenses were unchanged.

It seems like there are no consequences for petty crime.

It's still not cheap to break the law, though it may be less consequential in some cases. In place of jail, judges can and do order fines and victim restitution. The court can garnish Permanent Fund dividends and require community work service, and put people on probation and electronic ankle monitoring.

One example: A first-time shoplifting conviction, for an amount below $250, is a fine instead of jail. By the third conviction, the penalty is six months of probation. If that person violates probation, they could be put in jail.

My car or property has been stolen and police said there wasn't much they could do about it. Is this because of SB 91?

In direct terms, how and when a crime in investigated is about a police agency's staffing and priorities, not SB 91.

Before SB 91, research showed longer jail sentences weren't necessarily connected to less crime. Police in Anchorage also haven't yet directly connected SB 91 to what appears to be a spike in property crime.

DiPietro, of the Judicial Council, said the law, or a misunderstanding of it, could potentially have emboldened some criminals.

"I'm sure there's probably some people who say, 'Hey, this is great, I can steal this Red Bull and not go to jail until the third time, because the store manager told me that or the cop told me that,' " DiPietro said. "But a lot of people don't want to be arrested, because it's kind of unpleasant."

But before SB 91, she said, data showed a three-week stint in jail was containing people but not deterring future criminal activity.

Prosecutors and members of the justice community, meanwhile, say the law has taken away a key intervention tool — jail — for people who repeatedly commit nuisance crimes, like trespassing or petty theft.

Who thinks it's a bad idea?

How are politics involved?

SB 91 cuts across political lines, and has in some cases pitted traditional political allies against one another. Anchorage Assemblywoman Amy Demboski of Chugiak-Eagle River, a conservative, is among those pushing for a repeal of SB 91. Her fellow Chugiak-Eagle River representative, Fred Dyson, is a former state legislator and also conservative. He worked on criminal justice reform during his time in the Legislature and has generally defended the law.

Between 2007 and 2015, while dozens of states adopted the reforms, the nation's imprisonment rate fell 8.4 percent and the combined violent and property crime rate fell 14.6 percent, according to Pew Charitable Trusts.

Is SB 91 saving the state money?

In prison beds, yes. Between July 2016 and July 2018, SB 91 was estimated to save a total of $21 million for the Department of Corrections. That comes from sending fewer people to prison. It costs the state about $42 a day to house a prisoner.

The state Legislature has been criticized for taking savings first and reinvesting later in prevention programs.

When will we know if it's working?

A main driver behind the law's passage was research that showed two-thirds of people released from prison in Alaska went back in within three years. SB 91 aimed to change that by reinvesting in rehabilitation and crime prevention programs.

The Alaska Criminal Justice Commission says it's too early to formally measure whether SB 91, which began taking effect more than a year ago, is effective at changing that statistic. Recidivism is measured in three-year periods, said DiPietro, of the Judicial Council.

Where exactly is the reinvestment money going?

This initial money has been largely funneled into existing programs through 2018. It creates a brand-new program that will supervise people who are released before their trial.

• $17 million will be spent on administrative costs, such as the salaries of the 60 new pretrial services officers that will perform risk assessments on detainees, and on leasing office space and buying office equipment. The money also foots the bill for staffing, travel and research associated with the state's criminal justice commission, an alcohol safety monitoring program and the parole board.

• $1.7 million: Substance abuse treatment in the Department of Corrections. Only a fraction of that was spent in 2017, because the only treatment provider withdrew its contract in December, officials say.

• $3 million: The Council on Domestic Violence and Sexual Assault for prevention programs, such as promoting youth leadership and engagement, talking to parents about healthy teen dating relationships, violence intervention programs like Green Dot and an after-school running program for young girls.

• $3 million: Community-based re-entry services, which involves case managers helping people leaving prison find housing and jobs. This expenditure included $1.65 million was in Medicaid claims for hospital care for inmates. The state also spent $7,850 to secure 360 ID cards for prisoners who were being released.

What's coming up this month in Juneau?

Gov. Walker has asked legislators to consider a new bill, Senate Bill 54, that would roll back some elements of SB 91.

Law enforcement, prosecutors, politicians and members of the public have been behind the push to roll back or entirely repeal elements of SB 91. A report from earlier this year by the criminal justice commission said the law is so new that there isn't data to assess whether it's doing what it was supposed to do or not.

Commissioners made recommendations to change the law based on anecdotal stories of problems prosecuting repeat offenders, according to the report.

What changes are on the table?

• Reinstituting up to three months of jail for a first-time Class C felony conviction, the lowest level. That includes vehicle theft.

• Restoring jail time for violating conditions of release, like committing a new crime, contacting a victim or using drugs or alcohol.

Part 1: People in Anchorage are fed up with crime. Did SB 91 make it worse?

Part 2: How Alaska's big criminal-justice reform law came to be