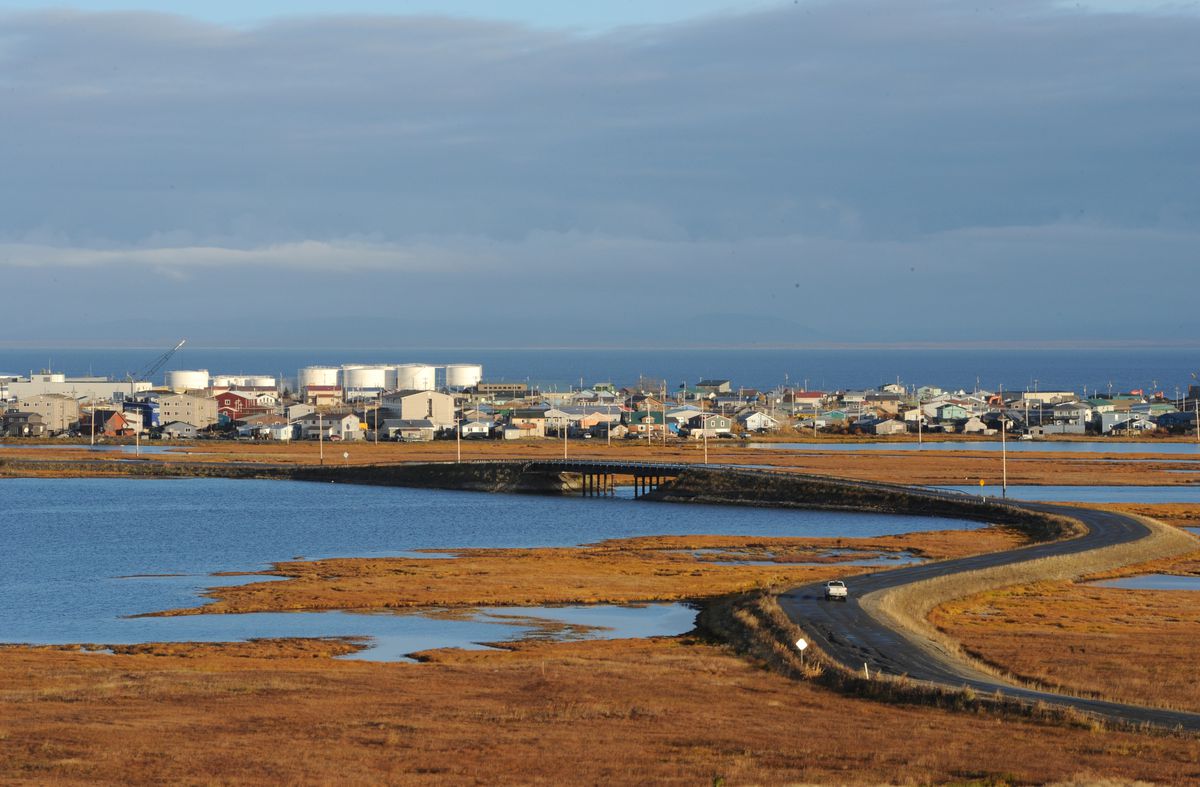 Relatives of Peter Wilson, the man charged with kidnapping, sexually assaulting and strangling a 10-year-old girl in Kotzebue, say Wilson began a pattern of rape and sexual abuse of young girls decades earlier.

"I was fighting him and trying to get him off of me so he choked me," she said of the first attack, which she says launched a four-month nightmare of rapes and beatings in the remote Northwest Arctic Borough village of Kiana.

Wilson's younger sister, Albertha Wilson, told the Daily News that on another occasion Peter Wilson sexually abused her and another child.

The women agreed to interviews with the Daily News as authorities investigate the history and past whereabouts of 41-year-old Wilson, who is charged with raping and killing Ashley Johnson-Barr on Sept. 6. The case shocked Kotzebue and the state, raising questions about the possibility of additional victims.

The cousin said she described the attacks recently to investigators working on the Johnson-Barr murder case. His sister said she reached out to authorities recently about her assault.

Alaska has the highest rate of sexual violence in the United States, with a rape rate three times the national average in 2016. Almost all victims and offenders know each other.

As the state — and the country — re-examine a culture of silence surrounding sexual assaults, Wilson's sister said it was time to tell her story publicly.

"I know lots of sexual predators are going to read (this) and I want to tell them all, they won't get away with it no longer," Albertha Wilson said. "I'm making a stand."

['She knew who he was': Unified by loss, Kotzebue puzzles over arrest in child homicide case]

Albertha said she was 3 when Peter Wilson, then 12, sexually abused her and another child when the family was living temporarily in Anchorage.

"I remember every minute. Every second," she said of an encounter that the Daily News corroborated with a second relative. Peter was baby-sitting at the time, they said.

"I didn't even know what he was doing. It scared us though," Albertha said. "He was being nice … but at the same time, he was being mean and scary."

Albertha said that for a time, she thought she had dreamed the assault and a subsequent visit to the hospital. She knew it really happened when, at 15, she received a call from Peter apologizing.

The alleged abuse and rapes took place in the late 1980s and mid-1990s, the women said. Police records for juveniles are not public.

It is unclear if either case was ever investigated by police or troopers. Albertha Wilson recently reached out to law enforcement authorities to determine what, if anything, happened at the time.

When a Daily News reporter called Wilson's mother to ask about accusations of abuse committed when Peter was a juvenile and, later, as an 18-year-old, she hung up the phone. Wilson is represented in the homicide case by a public defender who did not return calls last week.

Before the Office of Special Prosecutions charged Wilson in Johnson-Barr's death, Wilson's adult criminal record included no charges of sexual violence. He was not a registered sex offender and had regular access to children.

Albertha said she struggled with whether to support her brother after he was questioned by authorities but before he was charged. She had not thought him capable of killing someone.

"I swear to God I didn't. Just because I'm his sister, I kept telling myself he wouldn't kill a little baby," she said. "But everything else that happened (according to the charges), it all made sense. He did it to us when we were babies."

Investigators linked DNA found on Johnson-Barr's body to Wilson. Prosecutors and the Alaska Department of Public Safety have declined to say whether his DNA matches evidence collected in any other Alaska criminal cases.

"We face significant restraints on what we are able to discuss publicly regarding data received from (the DNA) database," Assistant District Attorney Jenna Gruenstein said. "I therefore cannot answer that question but can say that we are investigating this matter using all tools available to law enforcement."

'When he would catch me alone'

The first time Peter Wilson raped her, his cousin said, she was sleeping at a relative's house in the village of Kiana, east of Kotzebue.

"I woke up to Peter on top of me with my clothes pulled down," she said. She said she fought back. He choked her, she said.

"I came to with him passed out next to me with him only wearing a shirt and I was fully naked," the woman said.

Wilson told her not to tell anyone because he could get in trouble, she said. "(He said that) at least he wore a condom so I won't get pregnant. That I was an ugly dog who deserved to be punished."

Peter attacked her every few days after that for several months, she said. "When he would catch me alone."

The Anchorage Daily News generally does not name victims of sexual assault and is not doing so in this case at the woman's request. She asked to be identified only as one of Wilson's cousins.

Albertha Wilson, who is now 32, chose to be named in this story. "The whole time I was so hurt for Ashley. And having been in her place, I had no choice but to face it," she said.

The cousin said Peter sometimes bruised her torso and legs, mainly where no one would be able to see the marks. "One time he gave me a black eye because I was fighting back, and after he was done raping me, he told me to tell everyone that I got into a fight with one of his sisters," she said.

The cousin said she told Wilson's parents about the attacks. She said they accused her of lying and encouraged her not to tell others. The last time Wilson raped her, the woman said, he caught her near the village school, by a back road along the tundra.

"I got scared to go out anywhere in public because I was afraid I would see him," the woman said. She left Kiana and finished school in a different community, living with a friend.

"I knew the only way it would stop was to move away where he couldn't find me," she said.

The woman said she never told anyone else about the attacks until recently, when Ashley Johnson-Barr disappeared and she heard Peter was a suspect.

"I felt guilty for what happened to Ashley. I blamed myself for not coming forward to tell everyone what had happened," she said. "If I told someone and got him into trouble long time ago, I thought that would've stopped him for what he did to Ashley."

She hopes to press charges against Wilson for the 1996 Kiana attacks, she said. She said she recently described the attacks to Alaska State Troopers.

The statute of limitations on sexual assault cases might depend on the age of the victim and the timing of the offense, said Gruenstein, the state prosecutor.

Under Alaska law, sexual abuse of a minor that occurred after September 1992 might be eligible for criminal charges to be filed, Gruenstein said, speaking generally and not about accusations against Wilson specifically.

"I would note that even if a case is barred by the statute of limitations from prosecution, it potentially could be used for other purposes, such as sentencing," Gruenstein said.

Wilson's cousin and sister were children at the time of the alleged abuse and both recall telling adults about what happened.  "It was buried in the back of all our minds," Albertha said.

Now adults, they want other women and girls to feel empowered to tell their own stories.

"I just wish that more females would come forward and talk about it and know that they are not alone," said Wilson's cousin. "That they matter too."

Wilson's sister, Albertha, added, "I just had to bring it out. I just want everyone to know they don't have to be afraid."

"I'm sure it's like this for most women in Alaska," she said.