‘The system was unable to protect anybody from him’: Family struggled to help violent, mentally ill son charged in Alaska Zoo killing 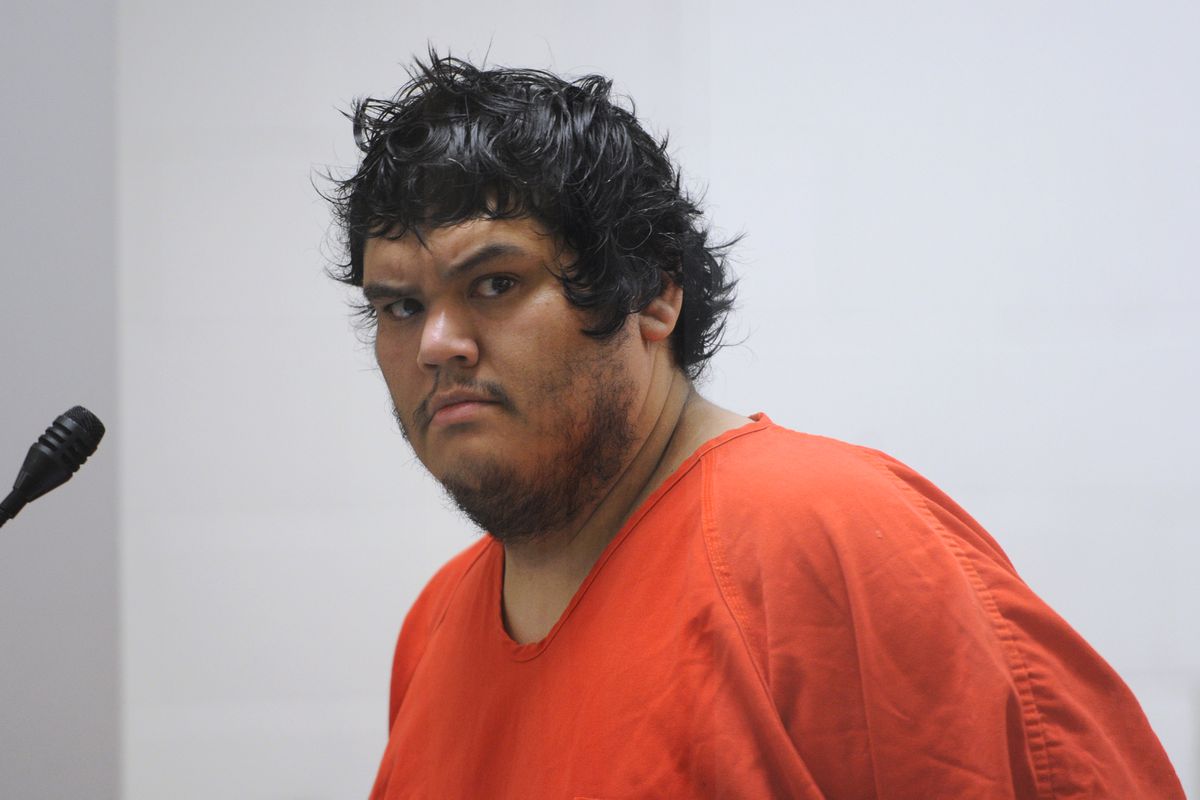 Clayton Charlie appeared in the Anchorage jail court on Monday, Nov. 19, 2018, on a first-degree murder charge among other charges in the death of Alaska Zoo head gardener Michael Greco. (Bill Roth / ADN)

Clayton Charlie appeared in the Anchorage jail court on Monday, Nov. 19, 2018, on a first-degree murder charge among other charges in the death of Alaska Zoo head gardener Michael Greco. (Bill Roth / ADN)

Despite spending months in the Alaska Psychiatric Institute, the 33-year-old’s illness was so severe that he was found on Oct. 25 to be unfit to face criminal charges in a string of violent, unprovoked assaults this year.

He was released, only to cycle in and out of the Anchorage jail on an almost daily basis as his mother frantically tried to have him involuntarily committed.

On Nov. 3, Charlie was released from jail again. The next day he stole a car and hours later, in an apparently random attack, stabbed to death Michael Greco, a beloved gardener serving as night watchman at the Alaska Zoo.

For Charlie’s family, this was the scenario they had been fearing and fighting against for years.

“I thought someone was going to die because of Clayton’s illness,” said Bill Paton, Charlie’s stepfather and an Anchorage orthopedic surgeon. “I thought that because of how Clayton was, and how the system was unable to protect anybody from him.”

To Paton, the only question was who would eventually become the target of his son’s violence.

Carrie Paton was a young nurse in Dillingham when a relative gave birth to a baby boy she couldn’t take care of.

The mother was mentally ill and Carrie was worried for the baby’s safety. When she went to visit the house to check up on him, the mother met her at the door with the newborn and a shopping bag full of baby clothes.

Carrie Paton ended up as the baby’s emergency foster mother — even though she already just adopted a 4-month-old girl. She bonded with the baby boy quickly.

Clayton Charlie was “a beautiful baby with great big brown eyes, all smiles,” she said. “Just a perfect child. I fell in love with him, and we ended up adopting him.”

Carrie later relocated to Anchorage. She and her husband eventually split and she remarried Dr. William Paton, an Anchorage orthopedic surgeon. They had other children.

Charlie was a joyful, easy kid who struggled with severe dyslexia but who otherwise enjoyed school, his father said.

Signs of schizophrenia began to emerge in early adulthood, when he was working as a commercial fisherman on the family’s set net site on Bristol Bay. He shot a hole in the floor of the family’s cabin.

The illness worsened. Charlie knocked holes in the walls of his rental apartments to look for electronic “bugs” and asking doctors to remove microchips he believed had been planted by the CIA in his body, Bill Paton said.

Early on, Carrie Paton says, she didn’t want to believe her son’s diagnosis.

“I’m a nurse and I know — I’ve worked in psychiatric. I did training at API," she said. "But I thought no, he’ll get on medicine and get better.”

Carrie Paton said she eventually accepted the diagnosis. She hoped her son could find the right medication and “live the best life he could,” she said.

They went through a familiar cycle: The family would petition to have Charlie committed to API to get him on medication. He would be released and stop taking the medications, assault someone, go to jail and “right back to API," Bill Paton said. The cycle would start again.

And there were times of relative stability: Months in which Charlie took his medication and lived with a girlfriend, his daughter and his sister without major incident.

Then he went off the meds and soon was drawing symbols on walls to protect the place from “spirits” and sprinkling water on people, which he said was to keep demons away, Bill Paton said.

“It got worse and worse,” he said. “He was bouncing around in cheap motels, assaulting people, getting into jail.”

Most people diagnosed with schizophrenia are not violent, and people with mental illness are 10 times more likely to be the victim of crime than the general population, according to the U.S. Department of Health and Social Services.

But Charlie was increasingly lashing out in violent ways, and sometimes asked his stepfather for guns.

Bill Paton says he always refused. Once, his stepson offered a chilling rationale.

“He said, ‘I can kill anybody I want to any time I want to with my bare hands,' ” said Bill Paton. “So why does it matter if I have a gun or not?”

Court records from 2018 show Charlie’s life spiraling deeper into violence and psychosis — with Alaska’s mental health and criminal justice systems trying and failing to help him.

On Jan. 15, he attacked the elderly owner of a low-rent hotel where he’d been staying, punching and kicking the man in the chest and destroying a TV and door unprovoked, according to charging documents. He was sent to jail and released the same day, according to Department of Corrections records.

At a family birthday party on Feb. 13, he attacked his stepfather and siblings in front of guests, including small children. Charlie is 5 feet, 11 inches and over 300 pounds. It was a turning point, said Bill Paton: His son hit him so hard in the chest that it produced a potentially dangerous atrial fibrillation.

His family filed long-term restraining orders against him. At a hearing, Bill Paton testified that his son had asked for knives so he could “cut somebody up.” He wrote that his son should not have access to weapons.

Then Charlie was found incompetent to stand trial, a legal term that means a person is so mentally ill they are incapable of understanding the proceedings against them or helping with their own defense. On June 11, he was sent to the Alaska Psychiatric Institute’s specialized forensic wing, where psychiatrists attempt to “restore competency” to criminal defendants so they may be tried for crimes.

While he was at API, he assaulted a fellow patient, bursting into the man’s room and punching him in the head and chest, leaving the man bloodied, according to charging documents in the case. He racked up another assault charge — his third of the year — and was taken to jail directly from the hospital. Again, the courts ordered that API try to restore him to sanity.

On Aug. 1, a forensic psychologist with API was called to testify at a hearing on Charlie’s competency. When taking his medications, Charlie would participate in groups and interact with therapists and other patients, she told the court.

When he was off his medications, he would walk around listening to headphones. He talked about people kidnapping his family, World War III, “Sith lords” and the “royal police.”

He had been admitted to the Alaska Psychiatric Institute 11 times before, according to the testimony.

Department of Corrections records show Charlie spent the next few months in jail. It’s not clear if the competency restoration effort continued or not.

‘We didn’t think he’d be released’

On Oct. 25, Bill Paton got a phone call saying that Charlie had been found too acutely mentally ill to stand trial for the three open cases against him.

Under Alaska law, the incompetency finding meant the charges would be dismissed.

Fearing his stepson might be again off his medication and potentially dangerous, Bill Paton filed for an emergency involuntary commitment on Oct. 26.

The family says they were notified that a judge agreed to let the process move forward — but the judge warned that the psychiatric team would need to determine whether Charlie was a danger to himself or others, Bill Paton said.

“We sat back and waited," he said. "We didn’t think he’d be released. I was sort of anticipating he was going to be confined at least 30 days.”

It isn’t clear what happened. Department of Corrections records show Charlie being released and re-incarcerated several times between Oct. 29 and Nov. 3.

Was Charlie sent back to the Anchorage jail on a psychiatric hold because API was full, an emergency practice the state is being sued over? Was he out and getting arrested for new crimes that were never charged?

On Nov. 3, Charlie — deemed too mentally ill to stand trial by the state — was released from jail.

He quickly made his way to his parents’ house in East Anchorage, which he was required to stay away from by a long-term restraining order.

Home security footage shows he snuck into the backyard sauna and hid in it for 12 hours, according to Bill Paton. Then he burst out and knocked on the front door, scaring some of his siblings. They told him to leave and called police.

Around 3 p.m. that day, a family member saw the family’s red SUV pulling out of the driveway and realized Charlie must have used an old extra key to steal it.

Hours later, according to charging documents, Charlie encountered Michael Greco, the gardener at the Alaska Zoo.

Greco was pulling a shift as a night watchman, according to charging documents. The two had some kind of a fight near the entrance to the zoo parking lot on O’Malley Road. An autopsy found Greco had been stabbed and had broken ribs and a perforated lung, possibly from being run over with the car.

The next night, Wasilla police noticed a Chevy Tahoe driving very slowly on the Parks Highway. It was the Paton family’s stolen vehicle, and Charlie was inside. He was wearing a bloody dress coat.

When Bill and Carrie Paton heard about a body found in the parking lot of the Alaska Zoo, they first worried it was Charlie himself.

Days later, detectives showed up at the family’s front door.

Carrie Paton said she was momentarily happy — she thought that authorities were there about the stolen car. She thought they might finally take seriously her concerns about her psychotic son and what she feared he could do.

She had no idea her son was being investigated for murder.

Now that Charlie is charged with murder, she wants a closer look at how her son slipped through the mechanisms meant to keep him from inflicting his violence on someone else.

On Monday, Charlie made an initial appearance at the Anchorage Jail Court. For days he had refused to be transported from his cell. An Anchorage judge ordered a bail of $300,000.

At the hearing, his stepfather testified by phone.

“I think it’s imperative he not be released," he said. "I think he’s a danger to the public.”