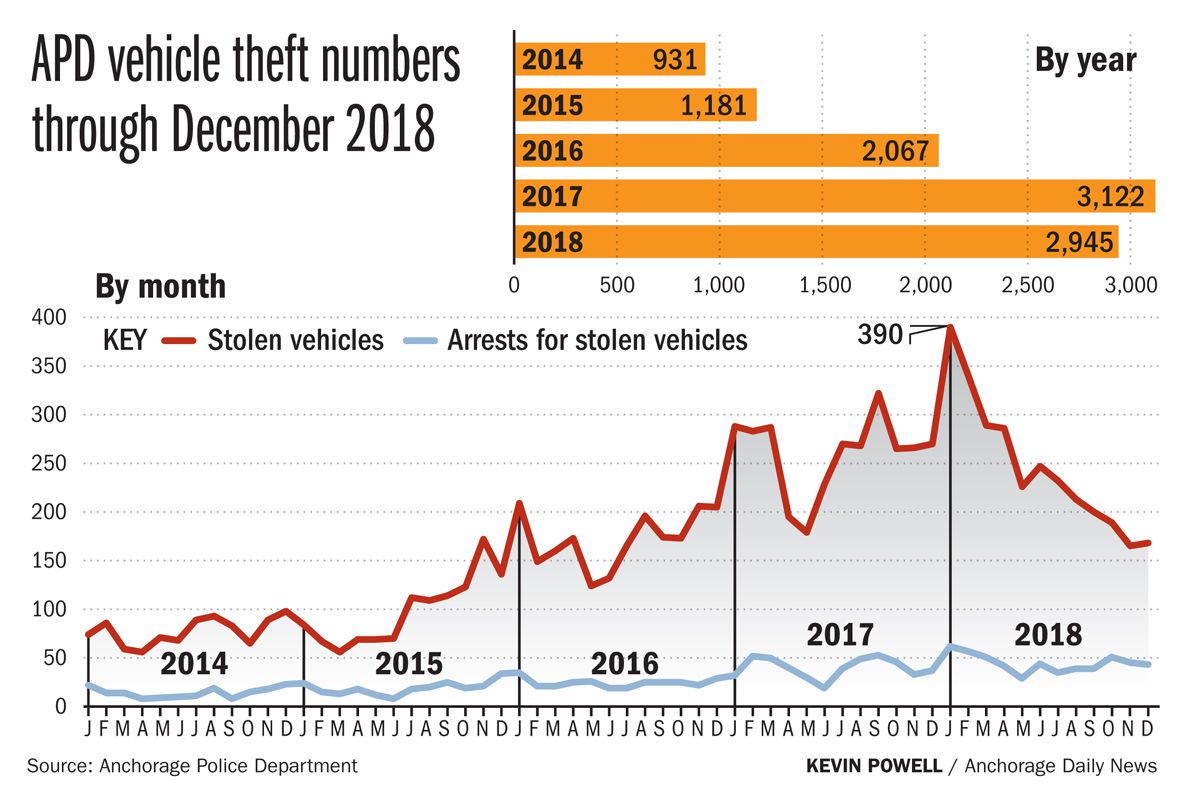 After three years of watching vehicle thefts steadily climb, Anchorage police said Tuesday that the number of stolen cars in the city is finally starting to trend downward.

The city ended last year with 2,945 car thefts, or about eight cars stolen every day, according to police. That’s roughly a 5 percent decrease from 2017′s record high of 3,122 thefts, or nearly nine cars per day.

Police started seeing an uptick in stolen cars in 2015, driven primarily by drug addiction, according to Lt. Jared Tuia, commander of the APD property crimes unit.

The increase continued until 2018, when the number of reports began declining month-over-month.

By November, the city had reached its lowest monthly number of vehicle thefts in more than two years, with 165 reports. That was down from a record high of 390 thefts in January — nearly a 60 percent decrease, police said.

[Earlier coverage: $45 million in property was stolen in Anchorage last year. This year is worse]

Deputy Police Chief Ken McCoy attributed the decline to the recent hire of additional police officers and property crime detectives. The police department now has more than 430 officers, which McCoy said is “the strongest and largest” it has ever been.

“Having more detectives available to respond has helped break up and disrupt these criminal networks,” McCoy said.

While some crimes were committed by groups, police have no reason to believe an organized theft ring was at work, Tuia said.

Officials were unclear on whether Senate Bill 91, the controversial criminal justice reform bill that was signed into law in 2016, has had an effect on the rate of vehicle theft.

“The laws as they change are going to have an indirect effect on the crime that happens on the street, but it would probably be a little out of place to tie it to this one piece of legislation,” said Capt. Sean Case, commander of the patrol division.

Meanwhile, the number of vehicle-theft arrests has risen, peaking at 537 in 2018. The number of arrests hasn’t always kept pace with the number of reports, however — a gap that police attribute to repeat offenders involved in multiple investigations.

“That same person may be charged with multiple crimes, not just the original stolen vehicle that they’re being brought in on,” Tuia said.

The police department’s records show that over the past four years, its stolen vehicle recovery rate has remained more or less stable, fluctuating between 92 and 96 percent on average.

Floyd Hall, an Anchorage resident who leads a loosely-organized effort to recovery stolen vehicles using social media, has previously claimed credit for the department’s high recovery rate. While McCoy did not address Hall or his group directly, he encouraged theft victims to report crimes to the police rather than use social media alone.

[‘I’m vigilant, but I’m not a vigilante’: Community watch group hopes to redeem itself with recent success]

Still, Tuesday’s announcement came with a word of warning: While police have made progress, thefts are still elevated compared to years prior to 2017, McCoy said. He warned car owners to lock their doors, keep valuables out of sight and not leave vehicles unattended while running.

"Make no mistake, the number of vehicle theft remains high, and the numbers are unacceptable,” McCoy said. "We may have broken the trend, but we still have a lot of work to do.”