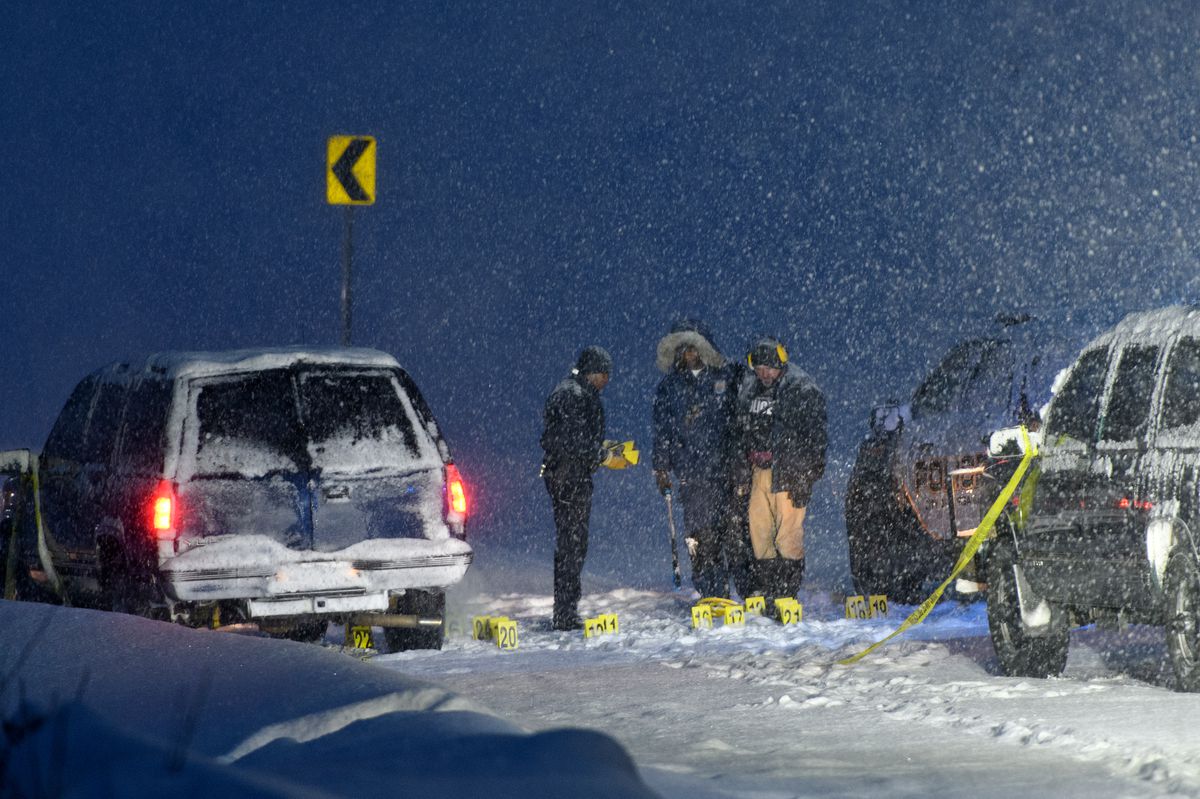 Police investigate an officer-involved shooting on the Elliott Highway, about three miles north of Fox, on February 12, 2019. Fairbanks Police say Garrett James Ebenal was shot and killed by police after pointing a gun at them after a pursuit. (Marc Lester / ADN)

Police investigate an officer-involved shooting on the Elliott Highway, about three miles north of Fox, on February 12, 2019. Fairbanks Police say Garrett James Ebenal was shot and killed by police after pointing a gun at them after a pursuit. (Marc Lester / ADN)

FAIRBANKS -- Officers shot and killed a 28-year-old man Tuesday afternoon when he pointed a handgun at them after a vehicle pursuit on the Elliott Highway, Fairbanks police said.

Garrett James Ebenal was the suspect in a spate of crimes between Saturday and Tuesday that included gun theft, an armed carjacking and an armed robbery.

Ebenal, driving a stolen vehicle, led officers on a pursuit out of Fairbanks on the Steese Highway onto the Elliott before he turned around at a truck stop and headed back to Fairbanks before 4 p.m. Tuesday, police said.

Four officers pulled up behind Ebenal and fired at him after he drove into a ditch trying to avoid a semi tractor trailer partly blocking the road, Fairbanks Police Chief Eric Jewkes said. Detectives helping stop traffic during the chase had asked the semi driver to pull over.

There were probably eight or 10 officers at the scene, Jewkes estimated Wednesday morning. He didn’t yet know the details of the shooting, including how far away Ebenal was at the time or what instructions the officers gave him before firing.

The officers involved are not being immediately identified. Jewkes said he’ll give them time to “decompress” before interviewing them about the shooting.

He said Ebenal, who has a lengthy criminal history, was familiar to his department.

“He was someone’s son, cousin, uncle. He belonged and mattered to people,” Jewkes said. “Whatever caused him to go sideways in life we don’t know, and we can’t make judgment on his path, other than to say it had to be stopped.”

The shooting is the second officer-involved fatality in a little over a year for Fairbanks police. Cody Eyre, 20, was shot dead in a church parking lot on Christmas Eve 2017 after, police said, he repeatedly refused to put down a gun and pointed it at officers. His family last month called for police training to de-escalate potentially deadly situations.

Jewkes said his officers made “the difficult decision” Tuesday to protect themselves and the community when they shot at Ebenal.

“We don’t want this to happen,” he said. “Unfortunately, Mr. Ebenal was the one who just made a series of horrible decisions from Saturday to yesterday.”

A statement police released late Tuesday night provided a timeline of the hours and days leading up to the shooting:

The events began Saturday at about 8 p.m. when officers responded to Walmart for a report of gun theft. A man had asked to see a .45-caliber handgun, “then stuffed it into his sweatshirt and fled the store."

"The suspect ran through the parking lot and attempted to carjack a driver at gunpoint,” police said. “It was reported that the gun did not have a firing pin and had a trigger lock on it.”

The driver of the car refused to give up the vehicle and the suspect fled, police said. Officers couldn’t find him Saturday night.

The investigation was turned over to Fairbanks police detectives, who identified the suspect as Ebenal and secured a warrant for his arrest. The detectives used surveillance video from the store to help identify him, according to Jewkes.

On Tuesday, Ebenal also became the suspect in back-to-back crimes within the space of a half-hour, according to police.

Shortly after 3 p.m., emergency dispatchers received a report of an armed carjacking at 19 College Road, a commercial building, Jewkes said. The victim said the "suspect ordered her out of her vehicle at gunpoint, took the vehicle and fled,” according to the statement.

About 30 minutes later, another report came in of an armed robbery at a strip mall at 29 College Road.

“The suspect smashed display cases with a gun, stole the contents, then ordered the employee to the ground at gunpoint and fled," police said. “The description of the suspect was similar to the carjacking at 19 College Road.”

“Officers pursued the vehicle up the Elliott Highway to Hilltop Truck Stop through whiteout conditions,” police said. “At Hilltop, the suspect turned around to head back into Fairbanks.”

Fairbanks police and Alaska State Troopers began stopping traffic northbound on the Elliott Highway and put out spike strips to keep the Ebenal from returning to Fairbanks, according to police.

Jewkes, en route to the area, said he decided to call for an ambulance given the blowing heavy snow, slick roads, and potential for a crash involving any number of people: the suspect, officers, other drivers.

“We knew that he was fleeing. The Elliott Highway is an extremely windy, hilly road,” he said. “Visibility was as bad as I’ve ever seen.”

At 3:55 p.m., Ebenal drove into a ditch along the highway at Mile 3 to avoid hitting the stopped semi, Jewkes said.

“The suspect exited the vehicle, came towards the officers with a handgun and pointed it at them. The four FPD officers fired," the police statement said.

His family has been notified.

Ebenal was a convicted felon with a “no bail probation warrant” that was issued Jan. 4, police said.

That warrant was connected to a probation violation on prior convictions for felony vehicle theft and failing to stop at the direction of an officer, charges that date back to March of last year, according to a state courts database. Ebenal was convicted of misdemeanor vehicle theft charges dating to about two weeks before the felony case. He was also convicted of several misdemeanor theft and domestic-violence assault charges in 2011 through 2013.

There was a $20,000 warrant for his arrest on robbery, assault and theft charges for the Walmart gun theft on Saturday.

A stretch of the Elliott Highway was closed Tuesday as authorities investigated. Around 5:45 p.m., they were placing yellow evidence markers in the area as heavy snow fell.

A handgun was recovered at the scene and was identified as the gun stolen from Walmart, according to police. The trigger lock had been removed and the magazine was loaded.

The officers involved in the shooting having been placed on paid administrative leave for a minimum of three working days, and their names will be released after 72 hours, the police department said.

Jewkes said Wednesday he was grateful to the officers who literally sprinted to their cars when Tuesday’s armed carjacking call came in. He also thanked dispatchers, Alaska State Troopers and the Steese Volunteer Fire Department, which supplied the ambulance.

Police asked anyone with information about the incident to contact Detective Malloy at amalloy@fairbanks.us, Detective Thompson at athompson@fairbanks.us or call 907-450-6550.