The murder suspect says his wife is merely missing. Prosecutors say he bought supplies to clean up the scene. 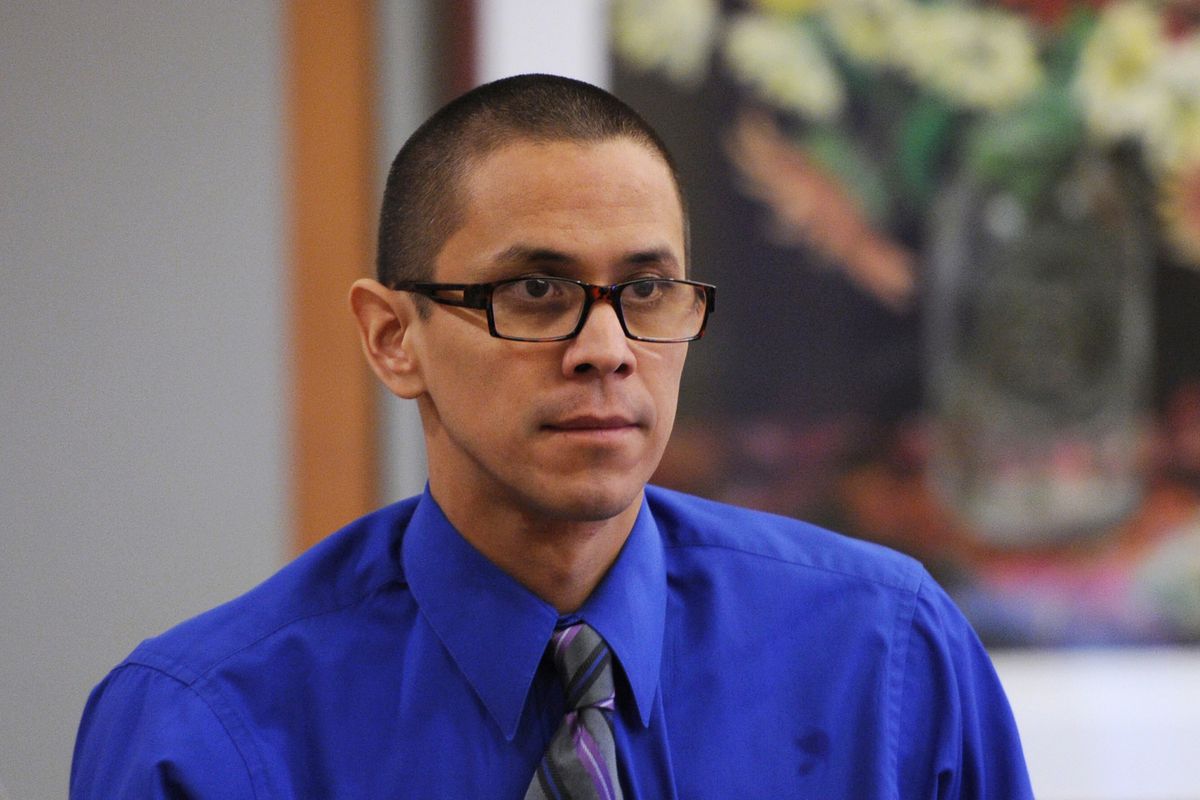 Thomas Skeek at his trial in Anchorage on Tuesday, Feb. 26, 2019. Skeek is charged with killing his wife three years ago. The body of Linda Skeek, 32, has not been found. (Bill Roth / ADN)

Thomas Skeek at his trial in Anchorage on Tuesday, Feb. 26, 2019. Skeek is charged with killing his wife three years ago. The body of Linda Skeek, 32, has not been found. (Bill Roth / ADN)

Linda Skeek has been gone for more than three years now.

She is presumed dead: The 32-year-old’s family ran an obituary in the newspaper and held a memorial.

But her body has never been found. Now, her husband is on trial in Anchorage for her murder.

Thomas Skeek, 37, is charged with first-degree murder in the death of his wife, whom he’d been married to for more than eight years at the time of her disappearance on Jan. 1, 2016.

The case of the state of Alaska vs. Thomas Skeek represents a rare but not unheard of circumstance in Alaska’s courts: a murder trial in which the victim’s body has not been located.

Only a few such cases have been tried since the 1970s in Alaska.

His trial began Thursday in an Anchorage courtroom. It is expected to last for weeks.

Prosecutors contend that Thomas Skeek killed his wife in the early hours of Jan. 1, 2016, and disposed of her body, then reported her missing to police.

“The family has not even had a grave over which to mourn,” assistant district attorney Saritha Anjilvel told the jury during opening statements Thursday.

Thomas Skeek’s defense attorney told jurors that the state couldn’t even prove Linda Skeek was dead -- much less that her husband killed her.

“What happened to her after she walked off on New Year’s Day 2016 we may never know,” said Emily Cooper, an attorney with the Office of Public Advocacy. “But my client did not murder his wife.”

The Skeeks were from Southeast Alaska and had been living in Juneau before moving to Anchorage in mid-2015.

Linda Skeek had gotten a good job at NANA Regional Corp., and the family had used some of her earnings to move into an apartment on Morningside Loop in South Anchorage, attorneys said. Linda worked while Thomas Skeek stayed home with the couple’s two elementary school-aged kids. Linda’s other daughter lived with her father in Juneau.

Behind the scenes, things were unraveling: The defense contends that Linda Skeek spent weekends drinking heavily, sometimes staying away from home for days at a time. Both Linda and her husband were having affairs.

“Her outward appearance of perfection was anything but once the weekends came around,” Cooper, the defense attorney, told the jury.

On New Year’s Eve, the family watched the movie “Minions” on a DVD player in their new Lincoln Navigator SUV and then watched fireworks downtown, prosecutors said.

From there, attorneys say surveillance footage captures Thomas Skeek dropping Linda off at various Anchorage bars while he and the kids waited in the car.

They returned to the Morningside Loop apartment after midnight.

Both sides agree that the couple argued when they returned home: The defense says Linda Skeek wanted to go back out to the bars, and her husband wouldn’t let her take the car because she had been drinking.

Linda walked angry and drunk into the snowy Anchorage night, where myriad dangers could have befallen her, Cooper told the jury.

Even after Thomas reported his wife missing, the Anchorage Police Department didn’t investigate the case for several days, Cooper said — crucial time that could have meant that additional surveillance video, physical evidence or suspects slipped away.

“This is still a missing person case,” Cooper told the jury.

Prosecutors contend Thomas Skeek killed his wife and then set about disposing of her body and cleaning up the mess. They told the jury that Skeek bought Clorox, ammonia and other cleaning products at Fred Meyer hours later that day.

A neighbor testified that she heard Thomas Skeek yelling that he’d kill his wife early on Jan. 1, before barging in the door.

There were sounds of a struggle and then thudding sounds, the neighbor told the jury.

Prosecutors said they would put out evidence to show that even though no body has been found, Linda Skeek was “gone without a trace.”

There have been only a few no-body homicide cases taken to trial in Alaska in the past 30 years.

The state has retried several of them before getting convictions, or defendants have been found guilty on lesser charges.

In the 1980s, the state of Alaska twice tried a Kodiak oil worker named Jack Ibach and another man for the murder of Ibach’s ex-wife, Laura Henderson. The two were locked in a bitter custody battle over their children when Henderson disappeared. Her clothes and wallet washed up on a Kodiak beach. But her body was never found. The two men were sentenced to long prison terms.

In 2001, an alleged cocaine dealer from Kenai named Rocky Seaman was charged with the murder of his brother’s girlfriend, whose body was never found. A jury didn’t reach a decision on the murder charge but convicted him of conspiracy, sentencing him to more than 70 years in prison.

More recently, in 2003, Billy D. Smith was sentenced to 99 years in prison for the murders of Harold Enzler and Nancy Bellamy in Nikiski. Their bodies were never found. Prosecutors argued that he shot the couple to death, chopped up their bodies with an ax and tossed the remains into the ocean near Homer. It took three trials before he was found guilty, according to news reports from the time.

The trial is expected to be a lengthy one. Prosecutors spent Tuesday calling witnesses to establish simply that nobody had heard from Linda Skeek from Jan. 1, 2016, on.

On Tuesday, Thomas Skeek sat quietly at the defense table in a blue dress shirt and a tie. Members of Linda Skeek’s extended family, including her biological mother, foster mother and teenage daughter, watched parts of the trial. Several had flown in from Juneau. Family members declined to talk to a reporter, saying they didn’t want to influence the trial.

Testimony was emotional: Two sisters fought tears as they described how their usual routine of texting and Facebook messaging with Linda came to an abrupt end on New Year’s Eve.

Linda Skeek’s foster sister Nicole Robinson-Wells described the last time she talked with the sister she called her “best friend.”

On New Year’s Eve, they traded messages about Linda’s last Facebook posting, a photo of the children in the new SUV watching a movie on an interior DVD player: “Watching ‘Minions’ before the fireworks. It’s too cold for us to be outside. Spoiled little family,” she’d posted.

They talked again around midnight. But the next day, and the day after, there were no messages.

“Did you ever hear from her again?” asked Anjilvel, the assistant district attorney.

The trial will resume Wednesday.